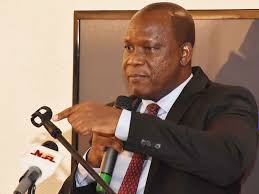 *Targets 10% Of Bank Loans For Sector
*Eyes $1bn Capital Base

Aliyu Abdulhameed, managing director and chief executive of the Nigeria Incentive-Based Risk Sharing System in Agricultural Lending (NIRSAL), says sustaining the ongoing efforts at diversifying the nation’s economy from oil as the Federal Government is pursuing today, could soon make the sector the second major source of foreign exchange for the country.
Speaking as part of a panel discussion on the Nigeria’s “Macro-Economic Environment Review” during the second edition of the Nigeria Economic Outlook Conference (NEOC’17) held in Lagos on Tuesday, he noted demand for grains and beef from Europe, America and Asia that would be paid for in foreign exchange.
He also noted the fact that a lot of agribusiness operators in Nigeria are not among those crying over shortage of forex, particularly oil palm giants with listing on the Nigerian Stock Exchange (NSE), such as The Okomu Oil Palm Plc and Presco Plc. Those are big players in oil palm and rubber export business for which they earn forex, just as some other small players export agric products and with the proceeds purchase what they need from abroad without the stress of sourcing US$ and other countries because of prohibitive rates.
This, he noted, is apart the sector’s capacity to save Nigeria huge foreign exchange spent importing food that can be produced locally or have substitutes, praising the Central Bank for Nigeria (CBN) for its revolutionary Anchor Borrowers Programme (ABP).
He praised the apex bank for fashioning and implementing the ABP, which he applauded as a necessary intervention in the agric sector that saved the nation from social crisis in the recent past. The issue, going forward, he added, is whether the CBN plans to continue.
NIRSAL, he stressed, plans to change the dynamics of the nation’s entire agricultural value-chain, whether crop or livestock, just as there are plans to its capital base to $1 billion this year from $500 million in 2013.
The increase is expected to come from global development institutions and not government or its parent- the Central Bank of Nigeria (CBN), according to Abdulhameed, was a deliberate move to ensure institutional stability
To move closer to the farmers, he assured that NIRSAL will operate from CBN branches across the country
He noted that the organization has so far released about N1 billion guaranteed for two banks and that after two years, the default rate has been zero.
Debunking claims that Nigerian banks shy away from borrow to the agric sector, he challenged farmers to come up with bankable projects and the banks would support once their risk management process is convinced of the viability.
With the activities of NIRSAL which is bank, instead of government funded, Abdulhameed said his management team has set a target of seeing “banks lending up to 10% of their loanable funds to projects within the agric value-chain.”
Also speaking at the event, Dr. Ogho Okiti, convener and chief executive of Time Economics, noted the need to restructure the country and put it on the path of true federalism.
Such, he believes, would make state governors more responsibility and think out of the box to grow revenue for development, rather than folding their arms, waiting for the regular free money shared at the monthly sojourn to Abuja for the Federal Capital in the name of Federal Account Allocation Committee (FAAC) meeting.
At the FAAC meeting, chaired by the Minister of Finance and attended by the Commissioners of Finance from the 36 states, the total accrued revenue to the federation’s purse is disclosed and shared according to the laid down formula among the centre, states and local government areas.
Okiti challenged critical stakeholders in the politico-economic space to think of “how Nigerian states can become viable without the monthly FAAC allocation.”
Stakeholders, he continued, must also ensure that there is a link between government and economic activities and between revenue and responsibility, by ensuring that states take ownership of natural endowments within state boundaries.
Speaking in view of the huge level of illegal mining going on in some North Central states, the time has come to change the dynamics that make the governments of these states feel unperturbed, it has nothing to lose.
There must be incentives to ensure that such illegal mining activities do not take place in their domain.