Post Views: 675 The management of International Brewery Plc submitted its full year earnings report for the period ended March 31, 2017 to the investi...

The management of International Brewery Plc submitted its full year earnings report for the period ended March 31, 2017 to the investing community recently, in line with the post-listing requirement of the Nigerian Stock Exchange (NSE).
The report, which came a month late, compared to the release date for the 2016 scorecard, among others, reflected the economic situation especially with manufacturers coming under more intense pressure from the operating environment that negatively impacted operating cost and purchasing power at a time Nigeria’s economy was deep in recession, especially for most part of the financial year. The poor performance, just like in the case of many of the companies that presented their score-cards before now, was attributed to the foreign exchange losses and supply hiccups.
The company’s sales revenue, despite the challenging business environment, according to the result, recorded a growth, which did not however translate into a corresponding rise in profit. Instead, profit for the year fell as a result of the high cost of servicing the company’s loans, as well as the huge exchange rate losses, while the decline was heightened by deferred tax dating back to 2013. As a result of the unholy combination of these factors, the directors lamented that the company had become over geared, making it impossible, they explained, for them to recommend cash or scrip dividend, in line with the company’s dividend policy.
The company’s profitability ratios have remained unstable over the past five years, as a result of which dividend has been paid twice within the period.
The company’s share price was rallying on the back of its announcement some days prior to the release of its result, of its proposed merger with two unlisted sister companies- Intafact Beverages Limited and Pabod Breweries, all majority owned by South Africa’s brewery giant- SABMiller. The initial euphoria that followed the announcement was however deflated by the directors’ failure to declare a dividend for the 2017 financial year.
It is also necessary to note that excessively high cost of operation had gradually eaten deep into the company’s bottom line as reflected on the numbers posted, which may not be related to the company’s increasing number of expatriate executives.
A comparison of the latest figures with those of the corresponding period of 2016 shows a mixed performance as turnover was up by 40.58% to N32.71bn from N23.27bn in 2016, while profit after tax suffered a deep 61% cut from N2.65bn in 2016 to N1.03bn. Shareholders’ funds dropped marginally by 0.85% to N13.88bn from N13.99bn.
Earnings Per Share (EPS) for the period stood at 31 kobo, as against 81 kobo in the 2016 full year; following which investors’ waiting period increased to 102.65x from 24.84x, as a result of the drop in profit and increase in share price from N20 as at released date in 2016 to N32.23 when the 2017 figures hit the market. Earnings Yield also turned south at 0.97% of the market price as at released date, as against the 4.03% yield estimate in 2016.
It is evident that the company has created its own market with the top line growth recorded in an obviously saturated market and the attendant stiff competition that had slowed down profit in Nigeria’s brewery industry, even as Guinness Nigeria, one of the sector’s biggest competitor for market share slipped into a loss position for the period.
The escalated foreign exchange rates within nine months of the 2017 financial year impacted International Breweries’ performance, especially considering the fact that the flexible FX regime commenced in June 2016, the first quarter of the company’s financial year. 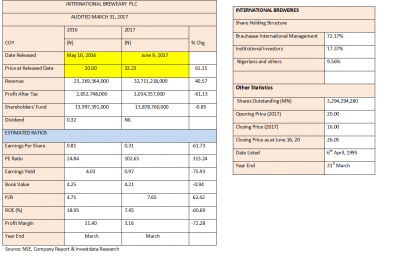 The company’s sagging Earnings Per Share is an obvious reflection of its drop in profitability, blamed on the fact that operating cost grew at a faster rate, thereby shredding the year’s bottom line, even while revealing the seeming ineffectiveness of the management’s cost cutting efforts, if any. Unless a miracle happens and there is a turnaround pretty soon, based on available signs, there is a slim probability that shareholders should expect a dividend payout in 2018 financial year. The miracle would be seen in the cost management efforts at a time when sales revenue growth continues to shrink and the operating environment not getting better to give investors hope. This is important, especially at a time the majority owner of International Breweries plans to merge it with two companies to widen market share and leverage on economies of scale and drive profit post-merger/integration of the entities.
Until then, for now, there is the urgent need for International Breweries to ensure profit grows at the same rate as sales revenue, even if not faster, in the face of rising cost of operations and the huge spending on marketing, sales and distribution.
Valuation/Recommendations
The company’s full year Book Value stands at N4.21, with a whopping Price/Earnings ratio of 102.65x on the strength of its low earnings per share of 31 kobo.
Investors with medium and long term investment horizon should wait till the stock finds it support level at a time it is still pulling back, and focus on the coming first quarter scorecard and see if there would be improvement in the company’s numbers before jumping in. Traders can also take advantage of the correction if the stock’s price drops further. We have revalued International Breweries and downgraded it to a SELL for investors now.
Technical View

Earnings Performance
International Breweries’ underperformance for the past five years has reflected in its profitability level leading to non-payment of dividend for the financial year ended March 31, 2017. The company’s sales revenue for the period has been on the rise to show its penetration into new markets, but as stated earlier, this has not reflected on its bottom line due to the fact that the cost lines continue to rise generally ahead of income.
It might be slightly difficult to place a fair value on International Breweries such as will match the current market price, except one can actually value investor confidence and sentiments for the equity’s price to retain strength.
Nevertheless, assuming such could be valued along with other ratios such as the high Price to Earnings ratio and low Book Value, when compare to current market price, it will be appropriate to place the equity at an intrinsic value of N10 to reflect the recent numbers posted for 2017.
Over the past five years specifically, the company’s turnover grew by 88.1% to N32.71bn from N17.39bn in 2013, while in same period, profit after tax have gyrated up and down to a low of N1.03bn from N2.33bn in 2013, representing 55.79% decline after hitting high of N2.65bn in 2016.
The company’s profit level has been unstable in the last five years and at the beginning of the financial year of 2017. In the same vein, its dividend payout has been irregular to indicate its weak earnings power that may result in investors dumping its shares. But the company’s current shareholding structure and float have supported its share price thus far, keeping it relatively high and not allowing a free fall.

Profitability Ratios
The company’s weak earning power and high Debt-to-Equity ratio of 86% have finally given way to P/E ratio of 102.65x from 36.09x in 2013, which has increased the waiting period of investors to recoup their investment as at 2017 release date. Along with the low estimated earnings yield of 0.97percent of the price.
Please note that the fluctuations recorded year-on-year in P/E ratio and Earnings Yield in the table below was due to the company’s unstable earnings and price movement. Estimated ratios show that the Book Value of International Breweries has been relative stable in the last five years despite the absence of a margin of safety, being highly overpriced at the market value. The Book Value stood at b N4.21 from N2.85 in 2013. Also, profit margin has dropped significantly due to the increasing cost of operations from 13.38% in 2013 to 3.16% in 2017. Return on Equity for investors have for five years constantly dropped to 7.45% from 24.81% in 2013. 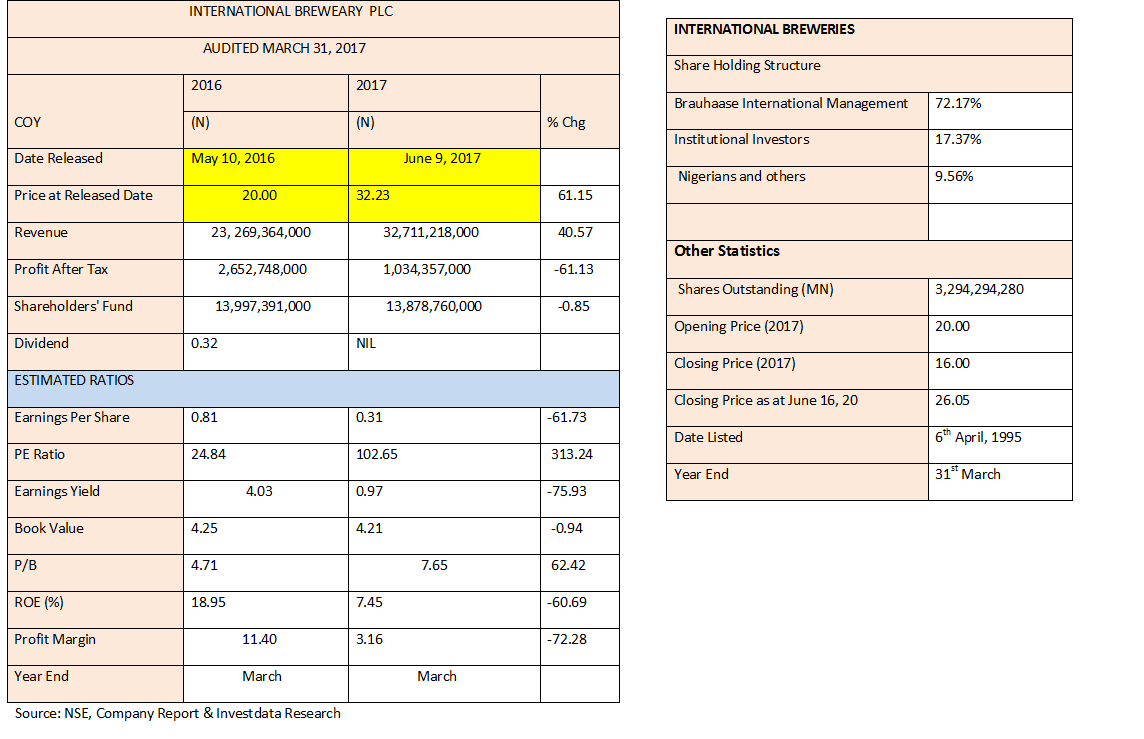