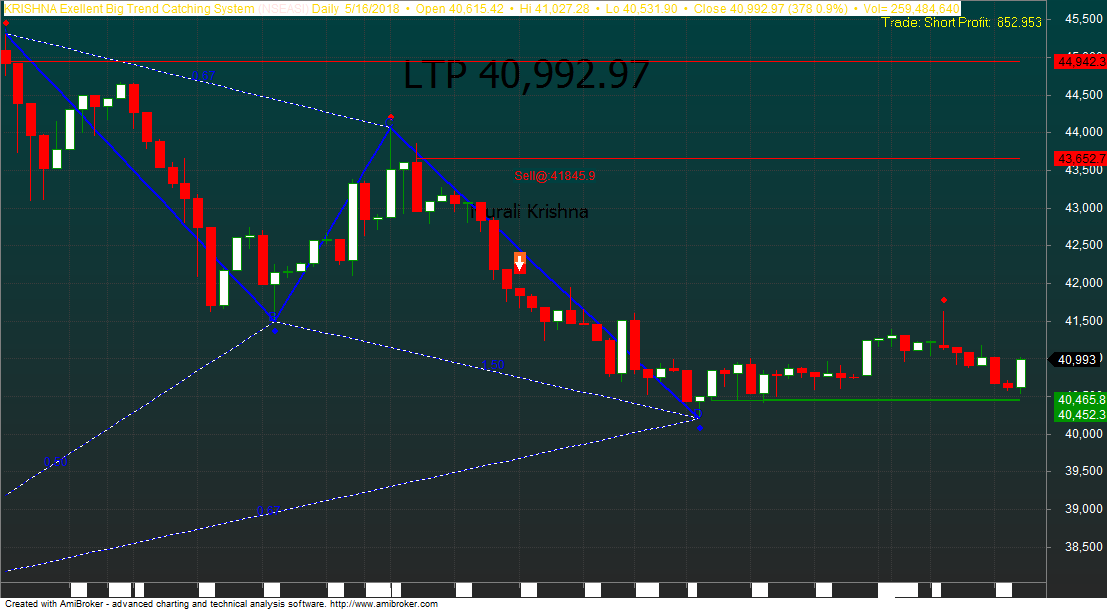 Post Views: 603 Market Update for May 16, 2018 After two days in the red, Nigeria’s stock market had green, even if very volatile session on Wednesday...

After two days in the red, Nigeria’s stock market had green, even if very volatile session on Wednesday on a low traded volume with improved buying pressure. Traders took advantage of low valuations in the midst of impressive economic data as the fiscal authority seems to be waking up to complement the monetary policy stimulus that had supported the economy so far. It is may be too early to link the positive close to Wednesday passage of the 2018 Appropriation Bill, six months after it was sent to the National Assembly, preparatory to been transmitted to President Muhammadu Buhari for assent. The budget passed by both legislative arms is coming with an additional N508bn spending capacity at N9.1tr, just as the crude oil benchmark was raised to $50.5 per barrel, up from $45 originally set.
The Nigerian Stock Exchange’s All-Share Index opened lower early and then rallied back at the mid-morning to usher in five waves which touched intraday highs of 41,027.28 that was the resistance for the day from the low of 40,531.90.
There was also an obvious market reaction to positive economic news likely the continued decline in inflation rate as April report revealed, just as the Federal Government made known its plans to settle debt owed to contractors. There is also the expected release of Nigeria’s Q1 GDP report by the National Bureau of Statistics (NBS), which many macro-economic indices show may come better than previously anticipated compared to the previous quarter.
The renewed interest of foreign participants in the market as revealed by transactions in Nestle, Guaranty Trust Bank, UBA and Nigerian Breweries cannot be over-emphasised. For example, 600,000 units of Nestle was traded at N1,600 per share, while Guaranty Trust Bank’s 20m shares changed hands at N44 each. UBA’s 25m units were crossed at N11.60 and NB, 4.2m shares at N124 per unit.
We have said repeatedly that it is the interpretation foreign investors give to the coming 2019 general elections that will determine the next phase of the market after it had corrected for almost five months in the midst of stronger corporate earnings and improving economic recovery.
Also, the fear of higher yield in the international market is a threat to global market stability. The risk now seems to be bubble in emerging market currencies due to divergence in global monetary policies arising from the widening gap in rates which will create capital flight out of low rate environments into the US where yield, the US$ and oil price are looking up.
Midweek’s market technicals were positive and weak as volume traded were low in the midst of negative market breadth and buying pressure of 93% while selling volume stood at 7% on a volume index of 0.71 of the day’s total transactions. The resurgence of the bull reflected in the money flow index at 63.99 points from previous day’s 56.80 points. This is an indication that funds are entering the market again but we have to watch to see if it can be sustained.

Index and Market Cap
The composite NSEASI gained a strong 377.55 basis points, closing at 40,992.97bps, after opening at 40,615.42 bps, representing a 0.93% growth on a low volume that was higher than the previous day’s. Similarly, market capitalisation was up by N136.76bn to close at N14.9tr from an opening value of N14.71tr, also representing 0.93% value gained to reduce the losing position of investors.
The rebound as mentioned in our earlier was driven by bargain hunter taking position in medium and high cap stocks like Dangote Cement, NB, Nestle, Zenith Bank, Fidelity Bank, ETI, Dangote Sugar, Unilever and AXA Mansard Insurance. This impacted positively on the NSE’s Year-to-Date returns, which rose to 7.19%; while market capitalisation gains for the period stands at N1.21 trillion, stand at 9.04% above the year’s opening value.

Mixed Sector Performance
Sectorial performance for the midweek’s session were largely bullish, except for the NSE Banking and Oil/Gas that were lower as a result of sell pressures in Access Bank, UBN and Forte Oil that pulled down the two indices. NSE Consumer, Insurance and Industrial indexes were higher due to price appreciation in Nestle, NB, Dangote Cement and AXA Mansard.
Market breadth remained negative as decliners outweighed advancers in the ratio of 30:15 to reverse two days down sessions.
Market activities were mixed as volume traded rose by 27.6% to 259.49m shares from previous day’s 203.36m units, while value was marginally down by 1.5% to N4.36bn from the previous day’s N4.43bn.
Transaction volume was boosted by banking and services providers stocks like Diamond Bank, Zenith Bank, Guaranty Trust Bank, FCMB and Tran nation-wide express which witnessed increased trading to top the activity chart.
Cutix and Unilever were the best performing stocks as they topped the advancers’ table, gaining 5% and 4.9% respectively to close at N3.15 and N52.35 each. This was due to expectation Q4 earnings and market sentiments.
On the flip side, Skye Bank and Diamond Bank were the worst performing, losing 9.4% and 9.1% respectively to close at N0.77 and N1.49 each purely on profit taking, non-release of three years financials by Skye, as well as reactions to unimpressive 2017 full year and 2018Q1 earnings reports by Diamond.

Market Outlook
We expect sustain trend as bargain hunters take advantage of low prices in the midst of volatility as investors reposition their portfolios, on the strength of company’s stronger numbers to start the financial year, as economic fundamentals become more robust as reflected in the April consumer price index. The market is expected to also price the news of plans by the fiscal authorities seek National Assembly approval to settle contractors’ debt which will boost economic activities. We expect Q1 GDP and outcome of MPC meeting next week to give direction.
Investors should not panic out of their position but watch events as it unfolds
However, we would like to reiterate that investors should not panic but go for equities with intrinsic value, especially during this season when dividend payment is ongoing and Q1 results are expected in the market arena.
We advise investors to allow numbers guide their decisions while repositioning in any stock, especially now that stock prices remain volatile amidst improving company, economic and market fundamentals.
It is time to combine fundamentals and technical tools to take decision by knowing the support and resistant level to reposition or exit any position. A stock market is in cycles. You must know the cycle it, or particular stocks therein are to successfully manage your trading and investment risk. For stocks that should be on your shopping list to buy in these seasonal changes as the year unfolds, sign up to INVESTDATA BUY AND SELL signal setup by calling 08032055467.
Get your home study pack of the INVEST 2018 Traders & Investors Summit and ride with the current recovery on Nigeria’s stock market and economy, thereby ensuring that you invest and trade with knowledge. You can also access stocks analysed in the home study pack of the Chart Summit held on February 24, 2018, including the 15 stock-picks for 2018 are available now to guide your positioning as trading for the year.
Comprehensive training materials on stock Trading and Investing for Financial Independence series are Available, you can play and watch on your mobile phone, laptop, desktop and TV set. Kindly call or send yes to 08032055467, 08028164086 or 08111811223.