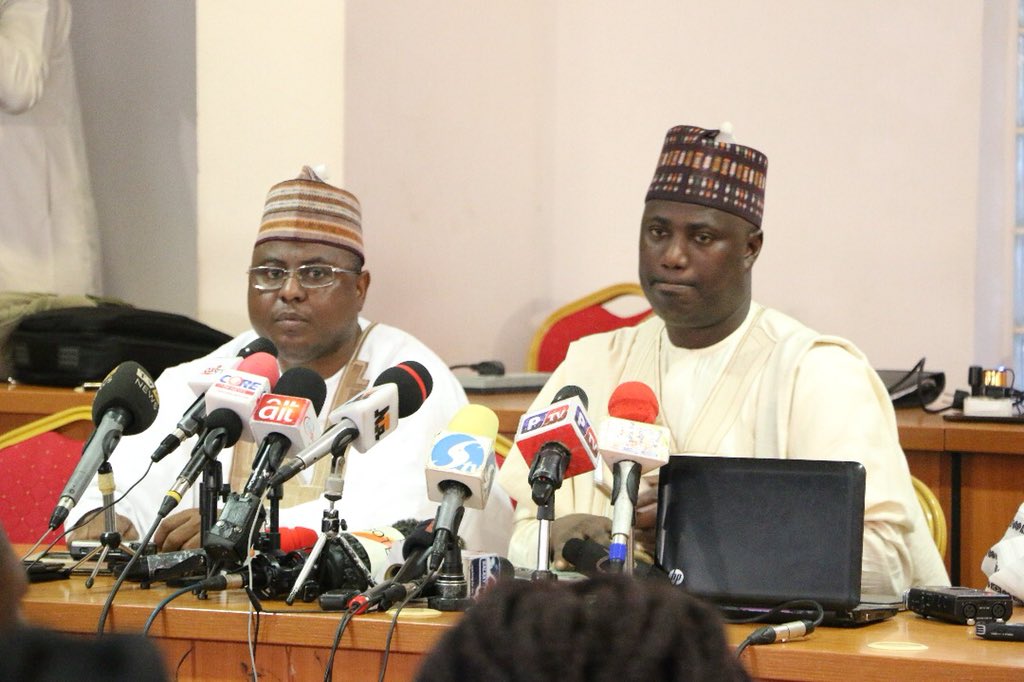 Nigeria’s federal legislators on Friday responded to jabs by President Muhammadu Buhari while assenting the 2018 budget two days earlier, accusing the executive arm of unduly exaggerating the extent of cuts made to the bill submitted to the National Assembly in November last year.

In a joint statement, the legislators at a press addressing addressed by Senator Aliyu Sabi Abdullahi and Abdulrazak Namdas of the House of Representatives, the National Assembly, reiterated the fact that adjustments were within the powers of the lawmakers in such a process, the legislators at a joint press conference by both arms, insisted that no substantial reduction was made “on any project to the extent of affecting its implementation.”

Specifically, they stressed that the N347bn cuts from 4,700 projects “were made from low priority areas to higher priority areas to support the generation of employment for our youth by MSMEs (Micro, Small and Medium scale Enterprises).”

Continuing, the lawmakers said the decision was taking “to reduce the funds in some areas in order to ensure balance and equity in the spread and utilization of our national funds.”

Substantiating their claim, the lawmakers noted, for example, that “the counterpart funding for the Mambilla Power Plant, Second Niger Bridge/Ancillary roads, the East-West Road, Bonny-Bodo Road, Lagos-Ibadan Express Road and Itakpe-Ajaokuta Rail Project, was reduced by only N3,956,400,290 – which represents only 1.78 % of the total N222,569,335,924 submitted by President Buhari. This left these projects with N218,612,935,634 which cannot negatively affect their implementation.

“This obviously contradicts the claim that these projects lost “an aggregate of N11.5 billion”.

Continuing, they noted that the counterpart funding for the 3050mw Mambilla Hydropower Project was reduced from N8.5bn to N8.2bn, while construction of the 2nd Niger Bridge, including access roads phases 2a and 2b in Anambra and Delta, among other projects in the South East geo-political zone were reduced by 9% from N10bn to N9.1bn. Appropriation for the construction of Bodo-Bonny road in Rivers State was cut by 13% to N8.7bn from N10bn; while the Lagos-Ibadan expressway got a 10% cut from N20bn to N18bn, which they insisted also “would not affect the construction of the road in one appropriation cycle.”

It was not all about cuts, they noted, as the National Assembly allocated additional N2bn to the Enugu-Port Harcourt expressway project.

Also, they reminded all that in the course of implementing the 2017 budget, the N3.9bn contracts for 15 roads awarded by the Federal Executive Council were unbudgeted and that the National Assembly chose to ignore such infraction, given the importance of the projects and the spread.

Why We Cut FCT Budget

The lawmakers agreed that they budget of the Federal Capital Territory (FCT) Abuja was cut by N7.5bn. and stand by the decision.

Based on oversight role, they said the National Assembly discovered that in the two years between the 2016 and 2017 budget cycle, there was a severe non-performance of the budgetary allocations to it. During the period in question, they lamented that over 50% of funds allocated and released to the FCT were not utilized and “were ultimately returned to the treasury.

“Hence, in order to ensure that scarce resources were allocated in accordance to ‘needs over wants’, funding for the FCT which has historically been under-utilised were allocated to other MDAs that have demonstrated the capacity to implement their allocation for the development

of the nation and its people.

“It was part of the allocation that we spread over the roads for which contracts were awarded with no budgetary allocation,” they stressed further.

On the claim that the provision for Construction of the Terminal Building at Enugu Airport was cut from N2bn to N500m and that this will further delay the completion of this critical project, the lawmakers said it discovered a possible fraud in the allocation, hence the intervention.

For the avoidance of doubt, they clarified “that during the budget defense and oversight processes, the National Assembly discovered that out of the N2bn contract for the Enugu Terminal Building, N1.7bn had already been paid to the contractor, and what is left to complete this project is just N300m. Hence, the National Assembly approved N500m for the project — which is even N200m more than was required.”

They quoted a newspaper publication in April quoting Aviation Minister, Hadi Sirika, as saying “We just last week released N1.7bn to the contractor and hopefully also, within the shortest possible time, we will release another N300m for him so that they can quickly finish the airport terminal.

Reacting to the President’s allegation that the National Assembly jerked up its budget unilaterally, the legislators argued that the increase would not raise the deficit level, given the increase in the oil price benchmark from $45 per barrel to the actual price of $51, which generated additional N523.65bn for the Federal Government.

According to them, “the public should note that this increase in the legislature’s budget was also necessitated by the drastic inflation of the last four years; the need to rehabilitate the National Assembly’s deteriorating facilities, like the elevators which shutdown almost weekly; spending hundreds of millions to procure diesel to constantly power the entire complex; and the need to immediately upgrade the security facilities of the complex. It is important to point out at this juncture that the collapse of the CCTV system facilitated the mace theft in April.

In a case of “we were not the only beneficiary of the budget padding,” the legislators wondered why the President singled out the NASS budget increase for querying, given an agreement between the National Assembly and the Executive, represented by the Ministry of Budget and National Planning, detailing how the additional revenues were allocated among the three arms of government. For example, they noted that the National Judicial Council’s initial budget proposed by the executive was raised by 10% to N110bn, while that of the Niger Delta Development Commission (NDDC) got N10.687bn, or 15.01% more to N81.882bn. There was also an additional N33.437bn appropriated for the outstanding liabilities to the NDDC by the Federal Government to enable the commission settle some of its contractors that were owed over N1tr; while the National Assembly got an additional N14.5bn in funding.

They also noted that the National Assembly increased the Public Complaint’s Commission’s budget from N4.2bn proposed by the President to N7.48bn, to ensure that they meet their mandate, the same reason why the National Human Rights Commission got additional N1.513bn at N3.013bn.

“It is therefore very clear that the three arms of government benefited from the increase which was mutually agreed on with the Ministry of Budget and Planning.

“In fact, we have correspondences addressed to the leadership of the National Assembly from Ministry of Budget making requests on how to spread the increment arising from the Benchmark differentials.

“It should be noted that the budget of the National Assembly as at 2014 was N150bn, which is still N10.5bn more than our current figure despite increased national challenges that requires frequent public hearings held on almost a daily basis at high costs; and intense oversight, which has become more thorough & incisive in order to check the Executive.