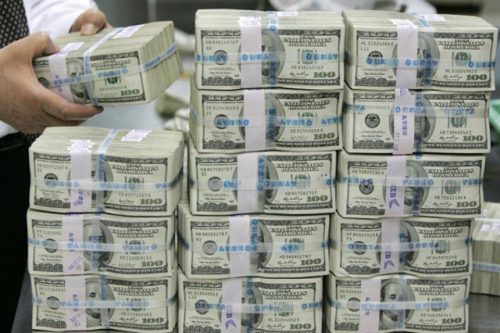 Nigeria’s Foreign Reserves Decline By US$1.112bn In One Month

Post Views: 537 New data by the Central Bank of Nigeria (CBN) on Wednesday showed that the nation’s foreign reserves has declined steadily by US$1.112...

New data by the Central Bank of Nigeria (CBN) on Wednesday showed that the nation’s foreign reserves has declined steadily by US$1.112bn or 2.34% in the past one month.
According to the information available on the CBN website, the reserves level dropped from $47.621bn on July 13, to $46.508bn on Tuesday, August 14, 2018.
The reserves last touched that level on April 3, when it stood at $46.506bn, rising from $46.257bn on March 29, 2018.
Before the gradual slip, the nation’s reserves had peaked at $47.865bn on May 11, 2018, meaning that it has fallen by $1.356bn, representing a decline of about 2.83% since then.
The continued decline, just as in the indicators of the Nigerian Stock Exchange (NSE) in recent months, is contrary to expectations of a sustained surge in foreign reserves by members of the CBN Monetary Policy Committee (MPC) as expressed in the communique No. 119 at the end of its two-day meeting on July 24, 2019.
The committee had while noting the reserves at US$47.2bn on July 23, 2018, expressed optimism and hope of further increases in the level in “the near term,” citing the favourable crude oil prices.
The committee, had advised the CBN “to sustain its current efforts to maintain investor confidence and ensure accretion to external reserves.
“The MPC also called on the Federal Government to continue to build fiscal buffers against possible oil price shocks in the future. Noting that the rise in the monthly distribution of revenues at the FAAC (Federation Accounts Allocation Committee) portend the danger of the absence of reserve buffers to absorb shocks in the future.”
As if the advice of the MPC for government to build fiscal buffers is coming late, oil price continued on the downtrend on Wednesday, as Brent Crude slipped $1.31, or 1.8% per barrel to $71.15pb, after touching a low of $70.30, according to CNBC.