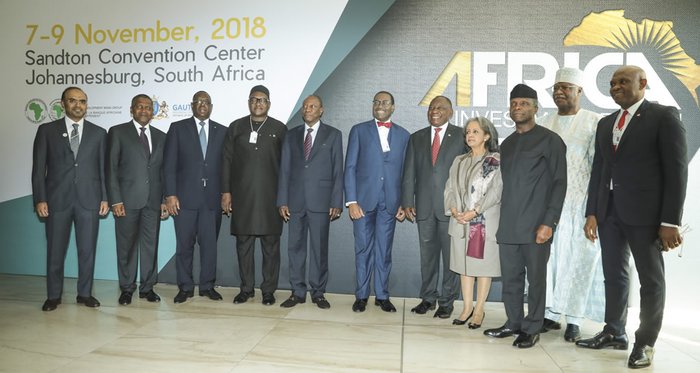 As the Africa Investment Forum (AIF) opened Thursday in Johannesburg, South Africa, African Development Bank (AfDB) President, Dr. Akinwunmi Adesina, said 306 project transactions valued at US$208.8bn have been developed across the continent to lure investors.
Of this, 60 projects and deals worth US$40.4bn will be discussed over a three-day period, by investors and promoters in boardroom sessions to fast track their closure, or remove policy and regulatory constraints inhibiting closure.
An additional US$28bn of projects will be showcased in “gallery walks” which have yet to move to boardroom investment conversations.
With over 330 investors expected to participate in the boardroom investment conversations, Adesina expressed delight that “the demand by investors has been overwhelming, so much so that 92% of the investments Boardrooms have been oversubscribed. That’s remarkable for a first inaugural investment forum,” Adesina said.
In his opening remarks, the AfDB boss lauded the “impressive gathering” of stakeholders, indicating that their “presence here shows you care about Africa, and that you have confidence to take up more investments in Africa.”
Giving an overview of existing opportunities in the power and agriculture sectors, President Adesina said: “we always asked what’s the next China after China? Well, appropriately, China figured it out. It’s Africa.”
He acknowledged that Africa has massive infrastructure deficits, from ports to railways, roads, energy, and information and communication technology infrastructure needed to spur its competitiveness in global markets. The African development bank estimates the continent has a financing gap of $68-108 billion per year for infrastructure.
A statement by the AfDB listed participants at the forum to include representatives ofb pension funds, sovereign wealth funds, capital markets, project sponsors, institutional and financial investors seeking to invest in Africa.
Adesina said, “but it’s all about how you see it: a glass half empty or a glass half full. Let’s see the challenges as a glass half full. That means Africa has an investment opportunity of $68-108 billion a year for infrastructure alone.”
“Which continent will have consumer and business expenditures that reach $5.6 trillion in just seven short years,” he wondered. In answer to the poser, he cautioned: “Don’t think far: think Africa!”
The power sector alone, according to the bank, provides a US$30bn annual investment opportunity, tapping into Africa’s vast resources of gas, solar, hydro, wind and geothermal. Huge investment opportunities abound to make Africa the leading region on renewable energy in the world.
The AfDB said it is spearheading the development of the Desert to Power to develop 10,000 MW of solar across the entire Sahel region. This will become the largest solar zone in the world.
The AIF, it said, seeks to help reduce intermediation costs, improve the quality of project information and documentation, and increase active and productive engagements between African governments and the private sector.
While Adesina described Africa as the “next global frontier for investment,” South African President Cyril Ramaphosa expressed hope that the deal would be concluded and that all would take part in “the deals that are going to be made here.”
The event was attended by President Alpha Conde of the Republic of Guinea; President Macky Sall of Senegal; President Nana Dankwa Akufo-Addo of Ghana and President Sahle-Work Zewde of Ethiopia.
Others included Vice President Yemi Osinbajo of Nigeria; Prime Ministers of Rwanda, Edouard Ngirente and Cameroon, Philémon Yang, as well as ministers representing the Kingdom of Morocco, Cote d’Ivoire, Tanzania, Niger, and Gabon. In attendance also were Governors and Board members of the African Development Bank.