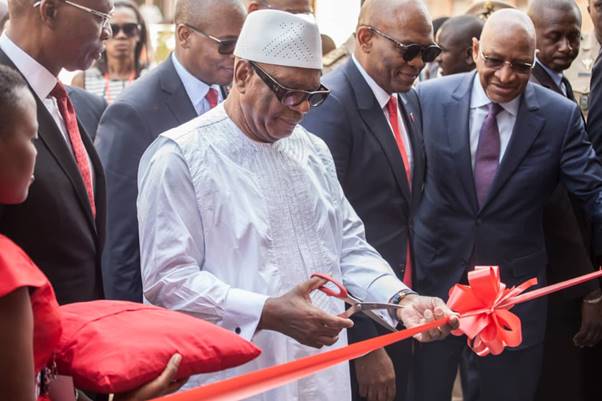 Post Views: 344 The United Bank for Africa Plc, on Monday commenced full banking operations in the Republic of Mali, extending its footprint and fulfi...

The United Bank for Africa Plc, on Monday commenced full banking operations in the Republic of Mali, extending its footprint and fulfilling the aspiration of deepening banking penetration in Africa, making it the 20th African countries where the group now operates, besides global operations in the United States, United Kingdom and France.
The bank’s latest addition in Mali was flagged off by the President, Ibrahim Aboubacar Keita, who noted at the opening ceremony: “Tony promised it and he did it,” referring to UBA Group’s Chairman, Tony Elumelu on his promise made several years ago to bring UBA to Mali.
The Malian president praised UBA Group for the vision to expand the bank’s footprint to Mali, just as he commended the tenacity and commitment of its group chairman to the development of the continent.
He urged Africa’s financial institutions to follow the developmental philosophy of UBA Group and its chairman in growing infrastructure, deepening financial inclusion and being catalysts for eradicating poverty in Africa.
Responding, Elumelu asserted UBA’s sustainability principles and philosophy and its commitment “to democratising banking on the continent. We are progressive partners for African corporates, institutions and governments whilst also helping to fulfill the financial aspirations of individual customers. Our train has finally arrived in Mali. We are here for mutual progress; we are here for shared prosperity.”
Also speaking, Group Managing Director, UBA Plc, Kennedy Uzoka, expressed enthusiasm on the Group’s operation in its latest outpost, saying: “We are in Mali to offer world class financial services that will surpass the expectations of our customers. I assure you that UBA is poised to deliver excellent services to the entire population of Mali.”
CEO, UBA Mali, Alhassane Sissoko told customers that the bank is optimistic on the competitiveness of its franchise in Mali with strong potentials for accelerated market share gain over the near to medium term.
He re-assured private and public sector players of good things to come, stressing that “the advent of UBA in Mali marks a turning point in the history of the Malian banking sector with new opportunities for businesses and individuals. We will always have in mind, the progress of our customers.”
Also present at the occasion were the country’s Prime Minister, Soumeilou Boubeye Maiga; Mayor of Bamako, Adama Sangare; Minister of the Economy and Finance, Dr Boubou Cisse; Minister of Digital economy and Communications, Harouna Touré; among other dignitaries.