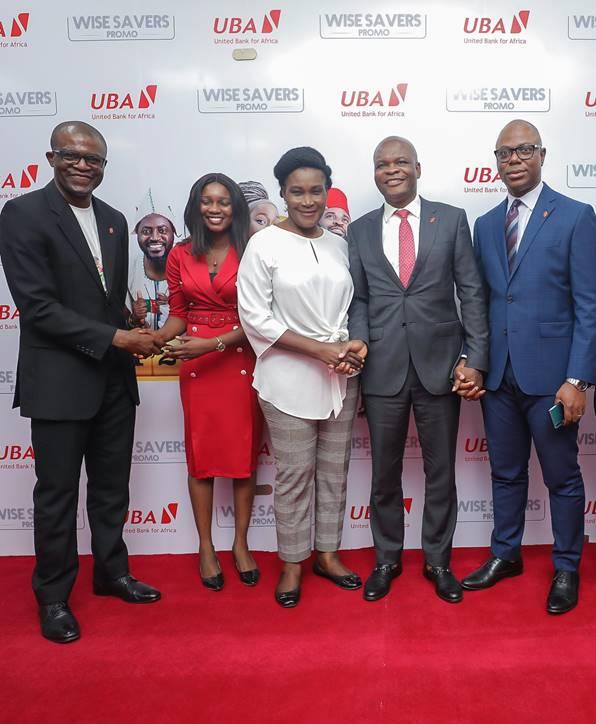 Post Views: 494 Another 20 winners went home with N30m, at N1.5m each in the second quarterly draw of the United Bank for Africa (UBA) Wise Savers Pro...

Another 20 winners went home with N30m, at N1.5m each in the second quarterly draw of the United Bank for Africa (UBA) Wise Savers Promo on Thursday, April 18, 2019, and witnessed by the Consumer Protection Council, National Lottery Regulatory Commission and Lagos State Lottery, Board, brought total amount won by the 40 winners, so far, to N60m.
Some of the lucky winners during the second edition, held at bank’s UBA House headquarters cut across the country’s various regions, including Alli Abiodun Ganiu, Tari E Francis; Onah Joseph, Okwandu Faith Ezinne, Igwedinma Chiedozie Onyekachi, Mgbakor Edmund Eke, Nwokoye Adeseye Ifeanyichukwu and Achi Sheyin Micheal.
The promo, which commenced in September last year is expected to run till September 30, 2019, and will see another 40 customers from across Nigeria become millionaires, winning N60m in the remaining quarters of the year. At the end of the promo, a total of N120m will have been won by 80 customers.
Speaking at the event, UBA’s Executive Director, Ayo Liadi, expressed satisfaction at the level of response received from customers across the country, adding that the campaign was targeted at rewarding loyal customers and also inculcating in them the habit of saving regularly.
He noted that there was a remarkable increase in the number of participants in this edition, compared to the maiden one, adding that the bank’s objective of helping customers’ save for the rainy day is being achieved.
According to him, “it is very easy to spend money but to save is a habit all must imbibe. Our key objective is to encourage our customers to save regularly. We are here to support our customers and to encourage them to save as well.”
Liadi urged other customers to take advantage of the subsequent opportunities the remaining two quarterly draws offer, stressing that “there is no better time to give back and delight customers than this challenging economic period where people need all the support they can get to make life more meaningful. With this in mind, we decided to prioritize our customers as we always do at UBA by giving them plenty to cheer about and that is the reason why another 20 more customers have been made millionaires today.
“During the recent cheque presentation to the first quarter lucky winners, I watched with bated breath how happy and elated each of the winners became. You could easily see the joy and happiness in their eyes indicating that the N1.5m would make a huge impact in their lives. That in itself will spur us to do more in fulfilling their dreams” he said.
Also, the bank Head Retail Liabilities, Tomiwa Sotiloye, explained that the promo was consistent with the bank’s novel initiatives of prioritizing customers and that it was necessitated by the invaluable belief the Bank has in its customers.
“We will continue to listen and give them nothing short of the best that they deserve. UBA will not relent, because we are impressed with the impact this has made so far and will continue to touch the lives of our loyal customers positively”. Sotiloye noted.
To qualify for the draw, customers must save at least N30,000 in their UBA savings account, or make installments of N10,000 each over a period of three months, just as none UBA customers can open a savings account on any of its numerous bank channels, including Magic Banking (*919*20#) and LEO, or in any of the UBA branches across the country, and start saving.