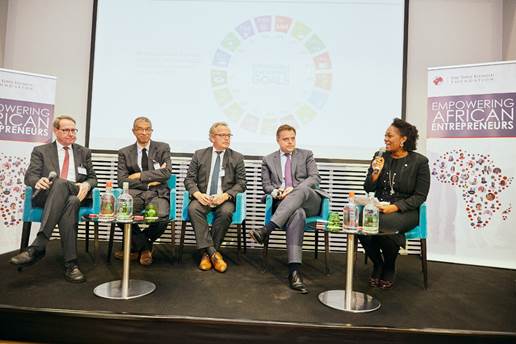 Post Views: 284 The Tony Elumelu Foundation recently hosted leading stakeholders in the development finance sector to a case study session in the Euro...

The Tony Elumelu Foundation recently hosted leading stakeholders in the development finance sector to a case study session in the European Union capital, Belgium in what it said is to demonstrate that Africa can also bring solutions to the table.
The event described as the Foundation’s unique approach to catalysing entrepreneurship in scale across the continent, had as the theme: “A Convening on Africa’s Economic Transformation: A Case Study of the Tony Elumelu Foundation.”
The occasion also served to present results of the foundation’s first five years of unique Entrepreneurship Programme, through which it had trained, mentored and seeded 4,470 African entrepreneurs.
Another 3,050 newly announced entrepreneurs are to receive seed funding, just as and drawn over 200,000 applications to its 2019 cycle, as part of Tony Elumelu’s $100m investment in entrepreneurial philanthropy, as an example of how vital capital could be targeted efficiently and effectively, at African businesses best able to create significant economic and developmental impact.
Declaring the event open, Koen Doens, Deputy Director General, DEVCO, EU, agreed that “Africa needs to create jobs by the millions to match the needs of its exponentially growing population. It will achieve this only if it unleashes a generation of empowered entrepreneurs. The Tony Elumelu Foundation contributes to this massively. The European Union wants to play its part and contribute to this endeavour.”
During a question and answer session with EU-Africa relations expert, Annie Mutamba, Founder, Tony Elumelu, highlighted the growing interest in the foundation and its unique approach, while welcoming a new type of intervention in Africa.
“We very much believe in collaboration, mutual respect and a shared commitment to transform Africa. Africa is ready but we need to do this through the right sustainable manner, that enables our people to become self-reliant, and independent, instead of perpetuating dependency. We need to implement practical solutions on the ground through entrepreneurship, which empower people economically and addresses issues of extremism, migration, and insecurity.”
Phillippe De Backer, Minister for Digital Agenda, Telecommunications and Post, Belgium, also commented: “There is an increasing desire in Europe to engage Africa, including its grassroots in a structure and targeted approach with the right processes. The Tony Elumelu Foundation offers this platform.”
The foundation, in March, announced 3,050 selected entrepreneurs for its 2019 cycle, continues to grow in scale, ambition and impact, and now actively leverages technology to support entrepreneurs through TEF Connect – a digital hub designed to link entrepreneurs across Africa, and which already has 500,000 users.
On the foundation’s future plans, he said: “We want to make sure that we impact more, reach more, touch more lives and get more women involved. We want to see more Northern Africa participation. We would like to reach 10,000 a year, with support from partners to empower additional entrepreneurs. We want to eradicate poverty and create wealth in a sustainable way.
“Ultimately, we want a larger and broader entrepreneurship ecosystem, that supports young Africans, and we want to deepen our engagement with government to create the enabling environment to support these Africans to succeed – the right investment climate, training, education, access to capital and most importantly creating the right investment culture,” he stressed.
The event also attracted dignitaries such as: Carl Michiels, Director, European Centre for Development Policy Management (ECDPM); Bruno Wenn, Former CEO/Chairman at DEG-German Investment and Development Company, and Advisory Board Member, Tony Elumelu Foundation; Viwanou Gnanssougou, Assistant Secretary General, African, Caribbean and Pacific (ACP) at the European Council of the European Union, and Ifeyinwa Ugochukwu, CEO of the Tony Elumelu Foundation.