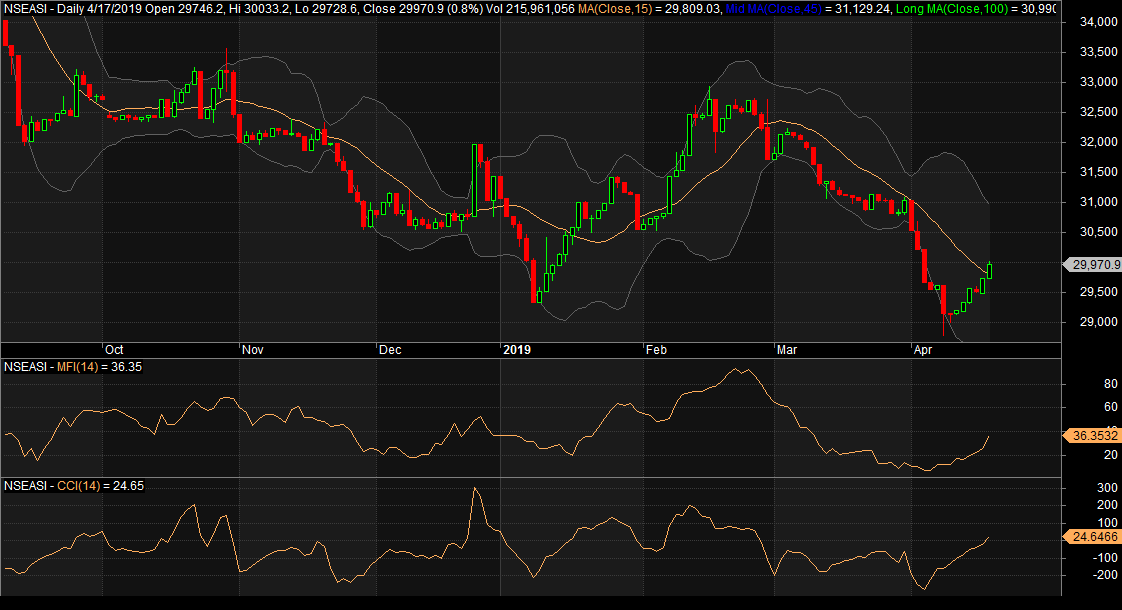 Post Views: 243 Market Update for April 17 Nigeria’s equity market at the midweek had yet another interesting but volatile session, consolidatin...

Market Update for April 17
Nigeria’s equity market at the midweek had yet another interesting but volatile session, consolidating its positive outing on the back of the encouraging consumer price index of 11.25% for the month March as released Tuesday by the National Bureau of Statistics (NBS). This supported the recent rate cut by the Central Bank of Nigeria (CBN), as well as the mixed earnings reports released by the nation’s three biggest banks by balance sheet size.
The much expected Q1 earning season which we envisaged will serve as a catalyst for the market after the post-election decline, kicked off Tuesday and Wednesday with the big banks presenting mixed performance just as we earlier projected. Earnings contracted, reflecting the weak economic fundamentals and activities in the country for the first quarter of 2019 that was mainly election season. During the period, the economy took the back seat as politicking was the order of the day.
However, the positive economic data and the seeming weak corporate earnings may support the market’s recent recovery wave, due to the prevailing low valuation and likely inflow of funds to the equity segment. Although, we must note that the uptrend is yet unconfirmed in this seeming recovery wave, as volume traded remains relatively low.
It is obvious that the weak economic and market fundamentals have affected businesses, given that results released so far show flat and even negative toplines, even as the companies managed to post a positive bottom line on the strength of foreign exchange gains, and drop in loan loss provisions that boosted their profit levels, among others.
The Nigerian Stock Exchange (NSE) All-Share index gapped up in the morning, a situation that lasted till afternoon, after breaking out the 30,000 psychological lines to test intraday highs of 30,033.22 basis points from lows of 29,723.55bps. It moved up in a 3-wedge advance but pulled back in the last minutes to close the day at 29,970.86 bps on a low traded volume. The index upside made 5-waves up to the highs for the day at 29,970.86bps and then bounced around up near the highs all day, consolidating a couple of times.
Wednesday’s market technicals were positive but mixed as volume traded was lower than previous day’s in the midst of flat breadth and strong buying sentiments as revealed by Investdata’s daily sentiment report that shows a buy position of 80% and sell volume of 20% of the total daily transaction volume index of 0.57.
The energy behind the day’s market performance was weak but looking up as shown by Money Flow Index of 36.35 points, from the previous day’s 25.70bps. This indicates gradual inflow of funds into the market, despite the seeming low liquidity, just as buying interest for cheap stocks are looking up.

Index and Market Cap
At the end of midweek’s trading, the NSEASI gained 224.62bps, closing at 29,970.86bps, after opening at 29,746.24bps, representing a 0.76% rise, while market capitalization went up by N84.37bn to N11.26tr, from its opening value of N11.17tr, also representing 0.76% appreciation in value.
Attention: Join Investdata buy and sell signal setup to get all our in-depth analysis of the picture and to get access to our carefully created watch list of stocks. To become a member, send ‘YES’ or ‘STOCKS’ to the phone numbers below. The number of stocks on our watchlist has increased due to the prolonged market correction. Take advantage of this service to buy right and sell right during this Q1 earnings season and beyond.
The day’s upturn was driven by demand for stocks such as Dangote Cement, Nestle, NB, FBN Holdings, Access Bank, Dangote sugar, Dangote Flour Mills, Oando and FCMB. This impacted positively on the Year-to-Date loss, reducing it to 4.64%, just as market capitalization drop fell to N463.43bn, or 3.91%, from the year’s opening level of N11.72tr.

Mixed Sector Indices
Sectoral performance indexes for the day were largely bearish, except for the NSE Consumer Goods and Insurance that were in the green, while others closed lower, led by the NSE Oil/Gas and industrial indexes with 1.47% and 0.37% respectively. Market breadth was flat as decliners slightly outweighed advancers in the ratio of 17:16.
Market activities in volume and value were down by 32.78% and 30.69% respectively to 216.01mshares worth N3.23bn, as against previous day’s 321.36m units valued at N4.66bn.
Mid week’s volume was driven by financial services stocks like Access Bank, Chams, UBA, Zenith Bank and FCMB.
The best-performing stocks for the day, were Access Bank and Chams with gains of 9.92% and 9.64% respectively, closing at N0.6.65 and N0.36 per share. While investors reacted to the impressive Q1 numbers by Access Bank, which showed early signs of its business combination with Diamond Bank, there also the impact of the three kobo dividend declared by Chams. On the flip side, Transnationwide Express and UACN Property lost 9.76% and 9.64% respectively, closing at N0.36 and N0.28, on profit taking and market forces.

Market Outlook
We expect a mixed performance depending on market forces as traders speculate ahead of Q1 numbers, which would combine with March inflation data to give direction into how this year could turn out after the weak 2018 financials.
Investors look to government’s policy direction as the market faces low liquidity problems in the ongoing earnings reporting season, vis-à-vis market and economic fundamentals.
Given the drop in the prices of major blue chips in recent times, creating entry opportunities, we expect speculative trading to shape the market direction going forward.
The volatility witnessed from last week until Tuesday was driven by traders and investors repositioning ahead of dividend declaration by major listed companies.
The ongoing volatility will continue as investors and fund managers rebalance their portfolios, with eyes fixed on political space and ongoing full year company earnings position and post-election market dynamics. Investors should review their positions in line with their investment goals, the strength of the company numbers and act as events unfold in the global and domestic environment.
However, we would like to reiterate our advice that investors should go for equities with intrinsic value,
We advise investors to allow numbers to guide their decisions while repositioning in any stock, especially now that stock prices remain low in the midst of mixed company numbers, weak economic and market fundamentals.
We appreciate all the participants and facilitators that made our Port Harcourt Chart Summit a success. Believing all the strategies discussed will impact positively on their trading if implemented.

TAKE ACTION
The difference between you and others who are not aware of what I am sharing with you is ACTION. Take action that will transform your life throughout 2019 and beyond by getting the just concluded and life-transforming INVEST 2019 TRADERS & INVESTORS SUCCESS SUMMIT and CHART SUMMIT Home study pack (USB) that you can play on your phone, Laptop and Television set. The events were a successful, insightful and educative outing that not only offered direction as to where investors should look for profitable trade in 2019 and beyond, insight into industries, sectors, and companies to seek worthwhile returns. What stocks should you buy? Grab the pack for the 10 Golden Stocks with the possibility of offering in 2019 multiples of what broader stocks do, coming out of this market correction environment.
Don’t sit on the Fence call or text Stock to 08028164085, 08032055467, 08111811223 now.