Key Financial Ratios
• This report observed the three-month financial performance of Guaranty Trust Bank Plc for the period ended 31st March 2019 and compares same with figures in the similar quarter of 2018.
• As noted above Non-Performing Loan ratio for the review period was 7.03%
• Comparing the released statistics with the corresponding quarter of 2018, we established that key performance ratios marginally improved over the performance indices of 2018. 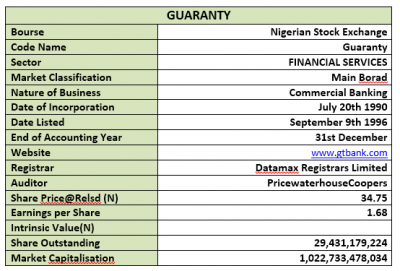 Company Figures
• Gross Earnings for the period improved marginally by 2.18% over the comparable period of 2018 to N106.07 billion, as against N103.81 billion in the preceding first quarter.
• Interest Income stood at N74.48 billion, which is 7.79% below the amount reported in the same quarter of 2018.
• Interest Expense equally stepped below 2018 estimates by 22.85% and is currently estimated at N16.26 billion, when compared to N21.08 billion in the previous year.
• Profit before Tax reported for the quarter under analysis is N56.98 billion, representing 8.29% improvement over the N52.62 billion announced for the first three months of 2018.
• In a similar manner, the Net Profit for the period is estimated at N51.60 billion, better than the N44.67 billion made is the corresponding quarter of the prior year.
• Total Comprehensive Income, therefore, builds above 2018 estimate by 15.11% to N51.60 billion, up from N44.83 billion. 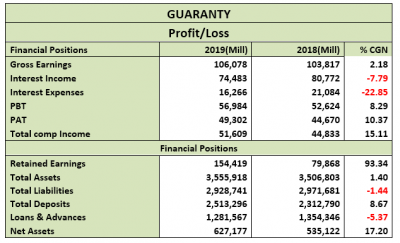 Volatility Ratios
• The estimated beta value of 1 for Guaranty Trust Bank implies that it has the same volatility as the market itself, even though it is less volatile when compared to its industry peers at 1.49 average.
• In our opinion, this is due to the assumed high price the stock is currently sold on the exchange floor, compared to others in its group. Investors seem to settle for other stocks with lower unit prices.
• Total Debt to Equity Ratio established that ‘deposit liabilities and other debt’ are 4.67x of the Equity Value, which is typical of the players in the financial services sector. This is also an advantage, given that it will use cheaper debts to improve performance indices.

Investment Ratios
• Following a similar trend as the company earnings, the estimated Earnings per Share is N1.68, which shows that the bank’s performance overrides that of 2018 by 10.37%.
• The said earnings yielded 4.82% of the current market price of Guaranty Trust Bank on the floor of the Nigerian Stock Exchange as at the time this report was made available to the investing public.
• Reflecting reduced confidence and at the same time a nearer recouping time of investment, the P/E-Ratio dropped by 29.01% to 5.19x as against the previous 7.31x.
• Revealing an overpriced status, the Price to Book value stood above unity at 1.63x, though below the previous 2.44x.
• Further revealing this stand is the Book Value per Share estimated at N21.31 compared to the N34.75 it is selling on the floor of the exchange when the result was released to the market.
• We have also checked the Operating Expenses Margin, which confirms the impact of operating expenses of the bank’s income. In our opinion, 15.33% is good for the bank, especially if this could be maintained.

Valuation
After carefully exploring our blend of valuation models, we have valued each unit of Guaranty Trust Bank Plc at N40.50. Thus, considering the current market price of N34.80 (as at the time this report was concluded), we Rate Guaranty Trust Bank shares a Hold.