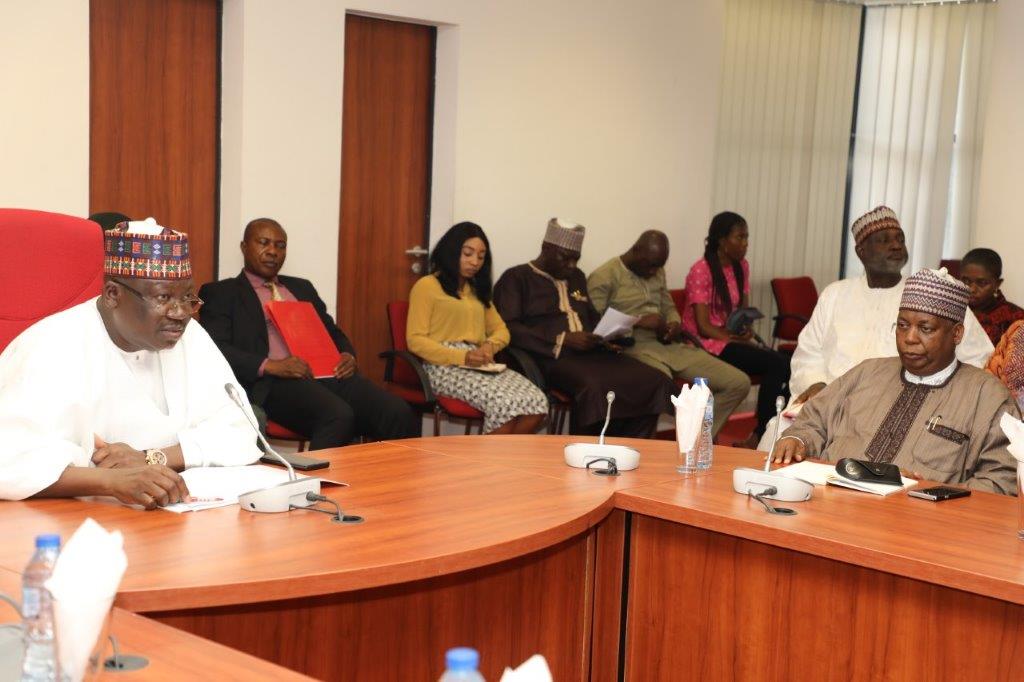 Post Views: 282 Senate President, on Wednesday, promised that the upper chamber of the National Assembly under his leadership would immediately commen...

Senate President, on Wednesday, promised that the upper chamber of the National Assembly under his leadership would immediately commence work on the Bill to Amend the Nigeria Deposit Insurance Corporation (NDIC) Act 2006.
Work on the bill, he noted, will begin afresh, given its importance, as the work earlier done by the 8thSenate had lapsed with the expiration of that Assembly.
In recognition of the importance attached to the bill, Lawan who spoke while receiving the management of the corporation further assured that the 9th Senate would give the bill the accelerated consideration it deserved.
Speaking earlier, according to a statement by Sunday Oluyemi, director, Communication & Public Affairs Department of the corporation, the Managing Director and Chief Executive Officer of the corporation, Umaru Ibrahim, who led the team, urged the 9th Senate to quicken the passage of the NDIC Act, 2006 (as amended) currently before the National Assembly.
Alhaji Umar who congratulated the Senate President on his election, along with the returning and first-time Senators on their victory at the polls, pledged the corporation’s resolve to work closely with the Senate leadership and the Senate Committee on Banking, Insurance and Other Financial Institutions to ensure a stable banking system which is critical to the stability of the nation’s financial system.
He recalled that in the past, the NDIC worked with the Senate to Amend the NDIC Act 2006 by holding seminars, workshops and actively participating in public hearings.
He lamented that the inability of the 8th Senate to pass the Bill unlike the House of Representatives which accorded the process the priority it deserved.
He, therefore, urged the Senate President to expedite passage of the Bill in view of its importance to the stability of the nation’s financial system.
Umar recalled the various challenges facing the economy and observed that only a stable banking system could guarantee the sustainable growth of the economy.
He added that the NDIC is partnering the Central Bank of Nigeria (CBN), and other relevant stakeholders through effective supervision and prudential regulation of the banking system.
The NDIC boss also enumerated the supervisory challenges facing the nation’s Banking System over the past few years, including issues related to risk management, corporate governance, non-performing loans, and the need for more efficient management, cybersecurity systems as well as consumer protection.
Continuing, he assured that the Financial Services Regulation and Co-ordinating Committee (FSRCC), comprising the CBN, NDIC, National Pension Commission (PENCOM), Securities & Exchange Commission (SEC), National Insurance Commission (NAICOM) and the Corporate Affairs Commission (CAC), amongst others, would continue to collaborate to ensure financial system stability.
He thereafter reiterated the corporation’s commitment to the sustenance of excellent relationship with the Senate particularly the distinguished Senators who would be on the Senate Committee on Banking, Insurance and Other Financial Institutions. The cordial working relationship, he noted, was not only crucial to the passage of the amendment of the NDIC, but other important Bills such as the Financial Ombudsman which was intended to provide a quasi-judicial framework for resolving disputes between banks and their customers.
While appreciating the NDIC’s management for the visit, the Senate President noted the importance of the corporation as an institution that ensured the safety and soundness of the banking system in Nigeria through the protection of depositors and acknowledged that it had done quite well in the discharge of its mandate over the years.
He assured his visitors that the Senate Committee on Banking, Insurance and Other Financial Institutions, when constituted, would work closely and assiduously with Management to ensure the protection of citizens against adverse activities in the banking sector.