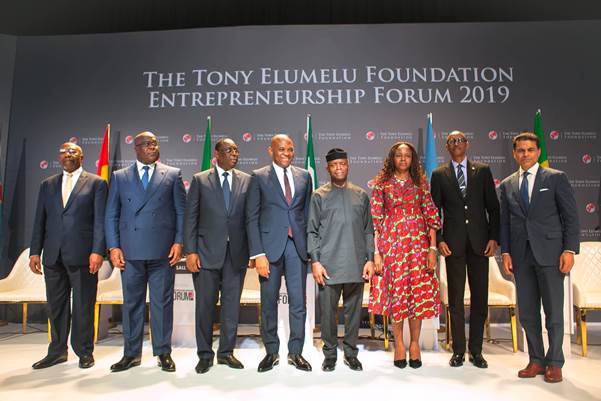 Post Views: 185 Over 5,000 participants, including 150 SME owners from across 20 African countries and over 60 global speakers from three continents c...

Over 5,000 participants, including 150 SME owners from across 20 African countries and over 60 global speakers from three continents converged in Abuja for the two-day Tony Elumelu Foundation Entrepreneurship Forum on July 26 and 27 in Abuja.
The speakers from the public and private sectors participated in interactive master-classes, plenary sessions, and debates aimed at generating ideas and defining concrete steps Africa must take to empower its youth and accelerate the continent’s development.
A statement by the foundation said guests interacted directly with young budding entrepreneurs from across the 20 African UBA-present countries who exhibited their innovative products and solutions at the UBA Marketplace, powered by Africa’s global bank, United Bank for Africa (UBA).
Presidential Debates moderated by the host of CNN’s show, Fareed Zakaria GPS, was a major highlight of the event focused on finding ways of eradicating poverty across the Africa continent through job creation.
The public sector leaders on the panel include President Paul Kagame of Rwanda; Macky Sall, his Senegalese counterpart; as well as Félix Tshisekedi of the Democratic Republic of Congo (DRC). Others were Prof Yemi Osinbajo (SAN), Vice President of Nigeria; and Dr. Ruhakana Rugunda, Prime Minister of Uganda, who represented the country’s President, Yoweri Museveni.
Healthcare played a dominant role in the conversations as leaders from the sector, including Dr. Awele Elumelu, Trustee, Tony Elumelu Foundation and Founder/CEO, Avon Medical Practice; Mrs. Aisha Buhari, First Lady of Nigeria, Madame Djena Kaba Condé of Guinea; and Madame Keïta Aminata Maiga of Mali, tackled the theme on the plenary session: “The Role of Healthcare in Economic Transformation”.
Other panelists included: Gilles Carbonnier, Vice President, International Committee of the Red Cross (ICRC); Oulimata Sarr, Regional Director ai, UN Women Central and West Africa; and Dr. Tedros Adhanom Ghebreyesus, Director-General, World Health Organisation.
At the Forum, Tony O. Elumelu, (CON), Founder of the Tony Elumelu reiterated the urgent need to create jobs on the continent and in the process catalyse Africa’s development, lamenting that extremism witnessed across the continent is a product of poverty and joblessness.
For him, “poverty anywhere is a threat to everyone everywhere… If our leaders understand the reason and rationale for our youths to succeed, they will do everything they can to support them.”
He also reiterated the role of technology as a key enabler to accelerating development, citing TEFConnect, the digital networking platform for African entrepreneurs launched by the Tony Elumelu Foundation in 2018. With over 500,000 registered users, the hub provides a platform for entrepreneurs to network and forge business partnerships regardless of their location.
In his keynote speech, Vice President Osinbajo commended the impact of the Elumelu Foundation, stressing that with “this particular intervention, Tony Elumelu has compelled us to focus on what really matters, our youth and their dreams. The message to Africa’s emerging business giants is a clear one: How and what can you contribute, like Tony Elumelu, to empowering the next generation, helping them to realize their own dreams?”
The forum ended with a tour of the UBA Marketplace, where entrepreneurs across the continent exhibited their products, as a pitching competition saw the winner walk away with a $5,000 grant from the United Bank for Africa (UBA).