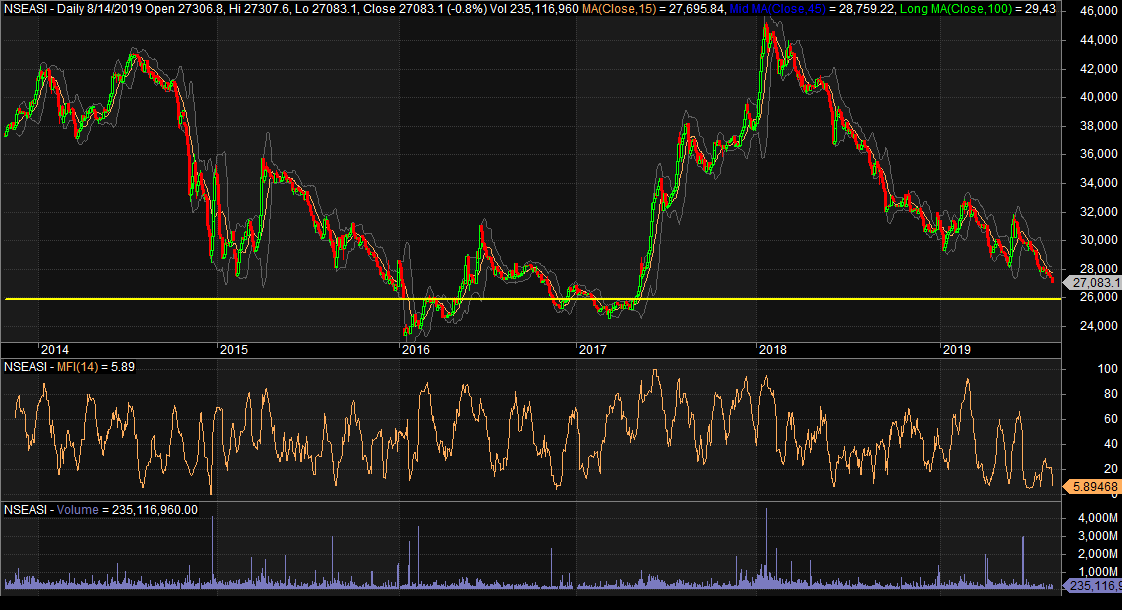 Market Update for August 14
Trading for the week resumed on the Nigerian Stock Exchange (NSE) Wednesday (owing to the two-day public holiday declared by the Federal Government to mark the Moslem festival of Eid-El Kabir) on a negative note.
Two significant things happened at mid-week’s trading: the benchmark NSE All-Share index touched a new 19-month low on the back of sell-offs in high and medium cap stocks ahead of consumer price index data and the inauguration of the federal cabinet; amidst strong selling momentum for many stocks that made new 10-year lows. Stocks that made a new 10-year low on the NSE include Total Nigeria, UACN Property Development Company, UAC of Nigeria, Nigerian Breweries, Guinness, Chemical & Allied Products, Oando, Ecobank Transnational Incorporated, Julius Berger, Honeywell Flour, Flour Mills, and GSK, among others. This happened on the back of persistent policy summersault and concerns over the Federal Government’s failure to reinvigorate the economy, now faced with a possible recession.
There is potential in the Nigerian Agric-business space as we continue the economic diversification agenda, which has seemingly remained a mantra over the past several years, even as successive governments failed to fashion a clear roadmap to achieve the programme. Diversifying the economy towards the agric sector, we believe, is not merely about extending credit facilities to framers. There must be a plan to impact the value chain, such that whether it is harvest season or not, prices of food items should not be significantly altered, with a good storage system in place. This will encourage farmers to produce more and get the adequate reward and the economy will be the ultimate beneficiary.
Since we have not, in truth, attained self-sufficiency in the various areas of food production, the Federal Government’s plan to ban importation, which should have been directed at the Nigerian Customs Service (NCS) and other border patrol agencies, rather than the Central Bank of Nigeria (CBN) as President Muhammadu Buhari did on Tuesday, should rather be gradual. This may likely create panic; uncertainty and fear that government can wake up one morning and make policies that would destroy investment. A gradual approach to the ban will also help the nation avoid demand-push inflation.
Meanwhile, Wednesday’s trading was a very negative and volatile session as the NSE’s All-Share index gapped down at the opening in the morning, moved lower, and oscillated between the midday and early afternoon. This could, however, not be sustained as the index went further down, touching intraday lows of 27,083.11 basis points, from its high of 27,307.60bps.
Wednesday’s market technicals were negative and mixed as traded volume and number of deals were higher than the previous session’s in the midst of negative breadth and sentiment, as revealed by Investdata’s Daily Sentiment Report, showing ‘sell’ volume at 100% and total daily transaction volume index of 1.15.
The impetus behind the day’s performance remained seriously weak as Money Flow Index read a mere 5.89 points, down from Friday’s 11.31bps, an indication that funds left some stocks and the market amidst persistent selloffs in blue-chip stocks.

Index and Market Cap
At the close of midweek’s trading, the All-Share index shed 223.70bps to close at 27,083.11bps, after opening at 27,306.81bps, representing a 0.82% decline, just as market capitalization lost N108.68bn, closing at N13.2tr, from an opening value of N13.31tr, which also represented 0.82% depreciation in value.
Attention: If you haven’t signed up for Investdata buy and sell signal setup, don’t delay. We have just added another risk management feature and new favorite stocks of the most revered traders and investors in corporate Nigeria to our watchlist, these stocks are with double potentials. To become a member, send ‘YES’ or ‘STOCKS’ to the phone numbers below. Take advantage of this service to buy right and sell right during this post Q2 earnings reports portfolio reshuffling and repositioning ahead of fiscal and monetary policy catalysts.
The day’s downturn was driven by continued selloffs in stocks like MTN Nigeria, Guaranty Trust Bank, Lafarge Africa, ETI, UACN, Total Nigeria, Dangote Sugar, Flour Mills, Cement Company of Northern Nigeria (CCNN), and Oando, among others. This impacted negatively on the NSE’s Year-to-Date loss, which heightened to 13.82%, just as YTD market capitalization gain reduced to N1.21tr or 12.61% from the year’s opening level of N11.72tr.

Bearish Sector Indices
All sectoral performance indices closed the session lower, except for the NSE Insurance that notched 0.45% up, while the industrial goods index led the decliners’ after shedding 1.55%, followed by Banking index with 1.26%, as just as Oil/Gas and consumer goods followed, dipping by 1.12% and 0.46%respectively.
Market breadth remained negative as decliners outnumbered advancers in the ratio of 27:4; market activities were mixed as traded volume was up by 6.48% at 235.12m shares from the previous day’s 220.8m units, while transaction value fell by 26.49% to N3.29bn, compared to Friday’s N4.48 billion. Volume was driven by trades in financial services stocks such as Guaranty Trust Bank, Zenith Bank, Access Bank, FBNH and Fidelity Bank.
Continental Reinsurance and Custodian Investments were the best-performing stocks, after gaining 4.32% and 3.33% respectively, closing at N1.45 and N6.20 per share, on the back of market forces and reactions to the industry recapitalization moves. On the flip side, UACN and NPF Microfinance lost 10% and 9.32% respectively to close at N4.95 and N1.07 on selloffs.

Market Outlook
We expect the mixed performance to continue as selloff persisted, despite the ongoing interoperation of economic indices and the corporate earnings reports released, as investors continue to reshuffle their portfolios in expectation of interim earnings reports of dividend-paying companies. Also, we see bargain hunters taking advantage of the-low prices stocks, as economic indices seemingly look positive. Discerning investors should target value stocks considering the current low valuation to position for dividend income and capital gain, especially as the market’s Price to Earnings ratio is 5.45x, which is well below the 8.24x average of its peers and a five-year average of 9.56.x. This revealed value and high upside potentials for a rally. But wait to confirm reversal before jumping into a new position.
They may also take into consideration the expected economic reforms as the government is set to assign portfolio to the screened minsters, just as Central Bank of Nigeria (CBN) had earlier rollout it plans to boost productivity and investment by instructing the banks to lend more to the private sector. This is aimed at reducing banks’ participation in government securities and lending more to the private sector to drive economic growth.
There is also the likely impact of portfolio repositioning for the last quarter of the year ahead of Q3 financials in the midst of analyzing Q2 numbers and unfolding political events.