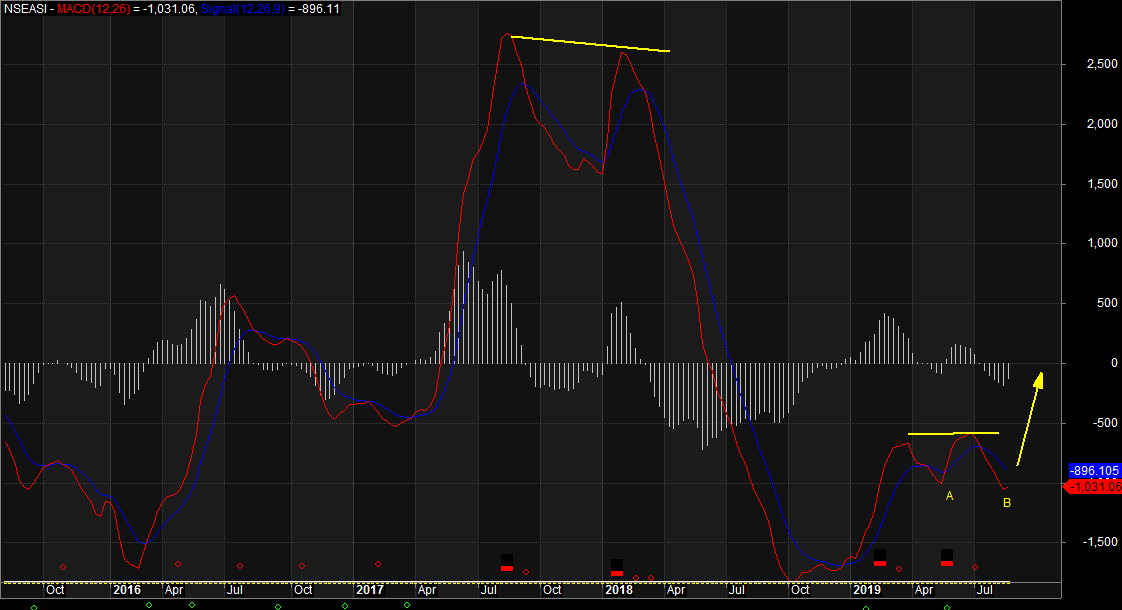 Post Views: 318 Market Update for the Week ended August 23 and Outlook For 26-30 Mixed and yet volatile trading is becoming the norm, rather than the ...

Market Update for the Week ended August 23 and Outlook For 26-30
Mixed and yet volatile trading is becoming the norm, rather than the exception on the Nigerian Stock Exchange (NSE) in recent times. This was, once again, the dominant theme on the bourse last week as the NSE’s composite index closed for the week higher as a result of the dominant low price attraction after recording a huge decline which now ranks it among the worst-performing markets across the world.
The index, however, turned positive last week, on the back of last week’s inauguration of the new cabinet and assignment of portfolios to the ministers by President Muhammadu Buhari for his second four-year term. Buying interests among market players were triggered across all classes of stocks that suffered huge losses, reflecting on all market indexes as they closed positive, except for the NSE Insurance that was in red owing to profit-taking in major insurance companies. Added to this was the fact that investors were cashing out of low price stocks to accumulate those paying interim dividends, the rest of which are likely to announce their results any moment from now.
Despite the mixed reactions to Nigeria’s new cabinet dominated by politicians, we still expect revitalization of the government’s Economic Recovery and Growth Plan (ERGP) agenda by infusing economic development stimulating policies.
Investdata believes that the Nigerian capital market alone can serve as a catalyst to jump-start the entire economy with little efforts if only the fiscal and monetary authorities would harness its potentials to drive the expected the all-important economic development. We believe economic growth with fewer resources is achievable while attracting foreign exchange inflow in the process.
The newly constituted Federal Executive Council is expected to start addressing issues around the economy: insecurity, power, education, healthcare, and infrastructure, among others, besides fast-tracking the disbursement and implementation of 2019 budget with a clear roadmap that comes with strategies on how to get things done. There is also need for a specific delivery time which must be constantly reviewed, to sustain effective implementation, thereby achieving predetermined goals and in the process boost investor confidence again.
The bear market rally witnessed in the week under review, came with many factors for and against it, ranging from the mixed half-year corporate earnings, positive inflation and Purchasing Managers’ Index (PMI) for the previous month, a decline in currency-in-circulation. There is also the prevailing low equity market liquidity, oscillating oil price and the likelihood of a slowdown in Nigeria’s Q2 GDP, in the face of a looming recession in the global economy amidst the escalating trade dispute between the U.S and China that continues to threaten world economic peace, especially Africa.

Movement Of NSEASI
Meanwhile, it was a bear rally in a downtrend with the week starting on a positive note as the All-Share index gained 0.71% Monday, as investors took a position in high cap stocks, which was however short-lived on Tuesday as the composite NSE All-Share index lost 0.21% on profit-taking. The market experienced a rebound at midweek on the seemingly positive news of the cabinet inauguration, gaining 1.09%. The bullish momentum was sustained on Thursday and Friday, as the index climbed by 1.01% and 0.62% respectively on the back of positive sentiments for blue-chip stocks. This left the week with a total gain of 3.25%, as against previous week’s 1.40% loss.
The seeming buying interests cutting across sectors and stocks during the week reflected on the market breadth which closed positive, with advancers outnumbering decliners in the ratio of 40:15. This was despite price adjustments in Custodian Investment, Ikeja Hotels and Lasaco Insurance for the 2018 full-year dividend declared.
Notwithstanding the seeming recovery in the week under review, some stocks including Okomu Oil, UACN Property, MRS Oil and NCR Nigeria, still hit new 52-week lows.
As usual, low and medium cap stocks dominated the gainers’ table, including the few interim dividend-paying companies; while the losers’ chart was a mix of low, medium and high cap stocks.
The momentum behind the week’s performance, however, remained weak, despite moving up as shown by Money Flow Index at 20.42 basis points, compared to 14.10bps in the previous week, indicating that funds entered few stocks and the market in the midst of cautious trading. Sentiments turned positive with a ‘buy’ position at 95%, while ‘sell’ volume was 5% on a transaction volume index of 0.90.

NSEASI Daily Time Frame
As research has shown, the general market direction makes up 50% of equity price movement, which means investors want to be in stocks during a bull or recovery market, when it is in a confirmed uptrend.
This confirmation usually occurs when the composite index follows through on four or more days after a rally attempt. The first two or three days of the rally are normally disregarded, given that its success has not yet been proven to follow through with power and conviction. A follow-through day occurs when at least one of the major indexes makes a large percentage gain on higher volume traded which should generally be in the region of 2% or more. All days of the rally do not need to be up, some may be down, however the low of the most current rally must not be undercut, or the rally would be considered a failure.
The current chart pattern and NSEASI action reveals an uptrend, as the index continues to trade below the upper band of the Bollinger and above its 20-Day Moving Average, just as the Relative Strength Index reads 49.76. But then, Money flow at 36.12 points on the daily chart.

Bullish Sectoral Indices
All sectoral and other indices closed higher for the week, except for the NSE Insurance index that ended the week 1.38% lower, while the NSE Banking index led the advancers, after gaining 9.19%. It was followed by the NSE Consumer Goods with 3.97%; while the NSE Oil/Gas and Industrial Goods indices lost 1.64% and 1.21% respectively.
Trading volume for the period rose by 220.50%, while value dropped by 88.43%, after 2.34bn shares changed hands for N19.71bn, compared to the previous week’s 725.61m units worth N10.46bn.
During the week, Zenith Bank released its audited half-year result showing flat gross earnings and bottom-line, despite which the directors declared a 30 kobo interim dividend per share (READ MORE).
Ecobank Transnational Incorporated and Oando Plc were the best-performing stocks for the period under review, after topping the advancers’ chart with 33.33% and 20.90% gains respectively, closing at N8.00 and N4.05 per share on low price attraction and market forces. On the flip side, Okomu Oil and NCR Nigeria shed 18.06% and 14.66% respectively, closing at N40.15 and N4.95, on selloffs.

Market Outlook
We expect a mixed performance due to profit-taking and expectation of the global economy and inflows arising from the 2019 budget implementation. However, discerning investors should take advantage of low valuation to buy into interim dividend stocks and other undervalued equities that have strong potentials to rebound with the general market.
Also, take into consideration the expected economic reforms as the government’s new cabinet swings into action, just as plans by the Central Bank of Nigeria (CBN) to reduce banks’ participation in government securities will expectedly boost private-sector lending, drive economic activities and investments.
Selloffs may persist in highly capitalized stocks due to portfolio restructuring. Hence, overall market performance may remain mixed, amidst the prevailing positive sentiments and negative breadth.
Market players should maintain a cautious outlook due to the low investor confidence, liquidity and the wait for major economic triggers. Hence, we advise investors to trade cautiously in the short-term, with their gaze fixed on blue-chip stocks that are selling more than 40% below their 52 weeks high, as we await positive catalysts to drive market recovery.
That notwithstanding, we would not overlook the possibility of a bargain-hunting motive supporting positive performance, especially with many fundamentally sound stocks remaining underpriced. With the prices of major blue chips continuing to drop in recent weeks, we expect speculative trading to shape the market’s direction this week, despite the seeming negative outlook.