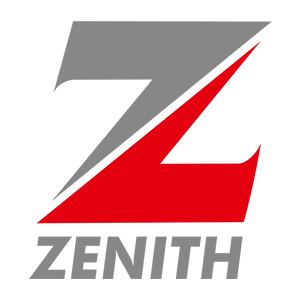 Zenith Bank recently released its half-year audited result, once again maintaining the same performance trend as its Q1 position, even as the numbers came slightly late, compared to the release date of 2018 numbers.
The consistent quarterly and yearly growth rate of the bank’s earnings over the years witnessed a slowdown in this latest outing, even as we expect a comeback in Q3, especially. This is expected, as the bank joins the fierce competition in the country’s retail banking space, deploying technology, innovative products, and services to meet the specific financial needs of customers while creating improved value for stakeholders, thereby sustaining and even improving on its dividend policy to reward investors.
Just like in the past five years, during which Zenith Bank consistently paid interim dividends, supported by the growth in profit over the period; it maintained the standard by once again offering to pay 30 kobo in line with market expectations. The offer was however despite the marginal decline in net interest income, an increased Impairment charge, depreciation and rising operating expenses that weighed down on its earnings.
The bank’s profit for the period was supported by growth in fee and commission income on the back of its bouquet of electronic products, collection services, investment in treasury bills and trading income.
The half-year position, after the huge provision for bad loans, shows the solid-state of the bank’s earnings as reflected in the profitability and investment ratios that came mixed, pointing to what should be expected at the end of the current financial year.
The loan loss provision increased by 41.3% to N13.7bn, compared to the previous half-year’s N9.7bn, while CAPEX increased significantly to 1.24%, compared to our 0.40% estimate for 2018.
The rise in loan loss provision, a witnessed across the sector is symptomatic of the state of the nation’s economy as borrowers/manufacturers come under severe pressure from bloating operating costs, especially that of powering their machines, wear and tear of their vehicles due to the terrible state of road infrastructure, which is capped by the very low purchasing power among Nigerians, as a result of which goods manufactured remain on shelves. This scenario is visible in the books of manufacturing companies quoted on the Nigerian Stock Exchange (NSE), with flat top-lines and bloating operating costs as they suffocate under a huge debt burden.
The good news however, is that the bad loans the bank has been forced to write off and provision for, would eventually boost the bottom-line in the form of a write-back when recovered, provided the nation’s economic fundamentals improve, just as inflation rate remains on the decline, while expansion in the manufacturing sector helps to enhance loan recovery.
In actual numbers, Zenith Bank recorded 3% increase in gross earnings to N331.6bn, from N322.2bn in the corresponding half-year of 2018; profit after tax grew by 9% to N88.9bn, from N81.7bn in 2018.
Despite the high Depreciation, Amortisation and impairment charges for credit losses, the profit margin for the period remained above the 15% international standard at 26.81% for Q2; just as Net Assets jumped to N819.5bn from N719.6bn last year.
Consequently, Earnings Per Share for the period increased to 283 kobo, from 260 kobo in 2018, representing a 9% growth, representing a replica of the price in 1.50x, which is lower than the 2.60x recorded last year. The second-quarter book value for the period stood at N26.10, which was 53% above its market value, revealing a high margin of safety.
Growth in total operating income, however, will further boost the bank’s bottom line in Q3, reducing it cost to income and NPL ratio below the regulator 5%, from the weakened position of 5.3% as it seeks to drive retail banking with technology and lend to customers through different products. These will enable it to meet the minimum Loan to Deposit Ratio of 60% stipulated by the Central Bank of Nigeria (CBN), from its current level of 51.2%. Meanwhile, the annualized Return on Equity (ROE) of 21.70% compares with our estimate of 23.71% for FY 2018. 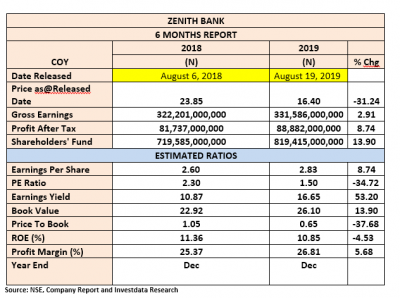 Valuation
On the strength of the bank’s intrinsic value and projected full-year Earnings Per Share of N6.18, we are positive about its performance at the end of the year. We expect income from investment and fees to improve further and support its Net Interest Margin (NIM), given that interest yielding assets came flat.
Thus, Zenith Bank is fairly priced at N35.85 per share, with trailing P/E at 3.32x and Q2 Price/Book Value of 0.82x.
Investors with medium and long-term goals, who desire to preserve capital, should look the way of this stock, given that Book Value shows that it is undervalued, compared to its share price on the NSE.
The Q3 numbers are expected to change the perception among investors towards the bank’s shares, and in the process drive its price subsequently.
We recommend a BUY for Zenith. Our target price is N35.85per share, which is a 100% upside to the last closing price of N17 each. 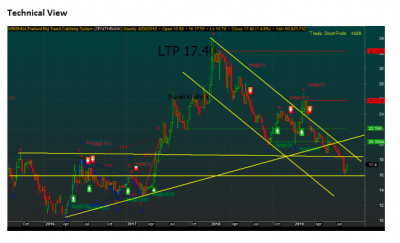 The price action of Zenith bank in the last one month has been mixed as it tries to resist further decline within a bearish channel that supports continuation or reversal of the current trend. It has retraced up within the channel to resist further decline on a positive sentiment for Q2 financials and the 30 kobo interim dividend.
RSI is reading 35.05 and money flow index is looking up and signaling that funds are entering the stock on a weekly time frame. The buying pressure on a weekly Time Frame is 82%, and Money Flow Index, 11.98 points, as it is currently trading below 20 and 50-Day moving average. 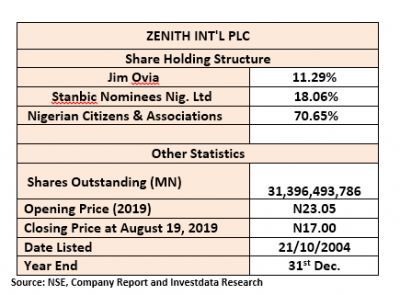 On the strength of the bank’s Q2 numbers, the potential of the bank becoming the first Nigerian bank to hit trillion Naira gross earnings and N200bn profit after tax marks has slowed down. This is notwithstanding the fact that it had consistently grown its numbers, becoming one of the most profitable banks in Nigeria over the past five years. The bank had also grown its bottom line to support net assets over the same period, before the decline it suffered in 2018 as shown in the table below.
Similarly, over the years, Zenith Bank’s Book Value has grown in the same direction from N18.93 in 2015 to N25.98 in 2018 after touching N26.17 in 2017.
On the strong performance of the bank, investor confidence and perception continue to support its share price with valuation tools pricing its stock at N35.85 each.

Four-Year Performance (2015-2018)
Financials emanating from the bank over the past four years reveal a stable, solid and robust performance as shown in the tables above and below. The numbers slowed down in 2018, after hitting its historic peak in 2017 as reflected in its profitability and investment ratios.
Gross Earnings during the four-year period grew by 45.8% to N630.34bn, from N432.34bn in 2015, while profit rose by 83.6% from N105.66bn to hit N193.42bn, the highest level so far. These performances supported the share price, as the bottom line continues to trend in the upward direction on a quarterly and yearly basis, amidst surprises in the economy and financial market.
Within this period, the risk and cost management efforts of the bank have improved significantly, resulting in enhanced value creation for stakeholders. The nature and complexity of the risks in its business require a strong and robust risk management structure to provide adequate oversight at all levels. Earnings Per Share remained strong and steady at N6.16, regardless of the tight regulatory environment of the industry and high costs of operation.
The bank’s earnings power rose from N3.37 in 2015 to N6.16, despite the economic recession and industry headwinds during these years.
As we stated earlier, Zenith Bank remains the most profitable and the highest dividend-paying bank in Nigeria, as its EPS of N6.18 beat analysts and market expectations. Return on Equity over the period moved from 17% in 2015 to 23.71%, which is a pointer to the fact that it has created value for stakeholders. 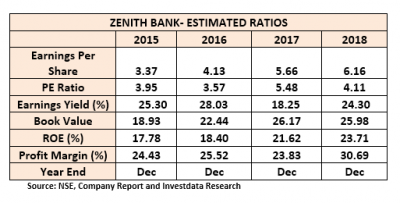