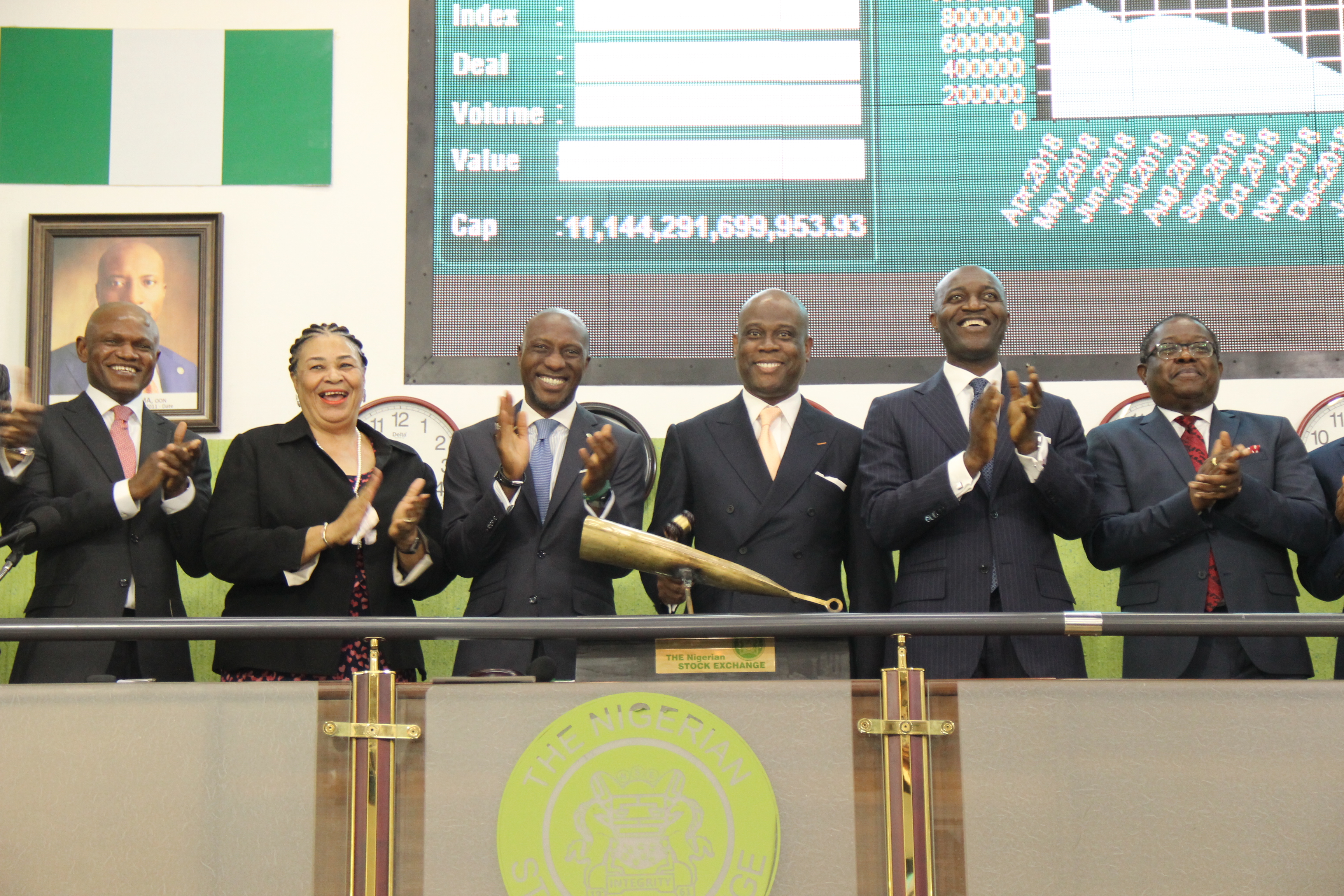 Post Views: 222 On Thursday, the management of Access Bank finally presented its audited result for the half-year ended June 30, 2019, to the Nigerian...

On Thursday, the management of Access Bank finally presented its audited result for the half-year ended June 30, 2019, to the Nigerian Stock Exchange (NSE), in line with its post-listing requirements. Understandably, the numbers came later than the previous half-year’s.
The growth in top and bottom lines for the period under consideration showed the impact of its continued capacity building and expansion drive on deposits and branch network expansion, as a result of its merger with Diamond Bank, a few months ago, thereby expanding its frontiers further across the country as well as other Africa countries. Credit quality and improvements in net income margin supported earnings position and helped to stand out in the industry, with a decline in impairment charges, increase in other operating income and fees, all of which boosted profit level.
Nonperforming loans (NPL) ratio declined to 6.4% from 10.0% as of Q1’19, reflecting a 34.1% decline in absolute NPLs to N196.3bn, compared to N297.7bn, following the integration Diamond Bank’s assets. Investdata believes that the bulk of these loans were likely restructured, given the flattish gross loan growth post-integration. The bank’s Capital Adequacy Ratio (CAR) at 20.8%; 49.7% Liquidity Ratio and Loan-Deposit ratio of 65.6% is in line with the regulatory guidelines, compared to the 60% benchmark set by the Central Bank of Nigeria (CBN) for all banks by the end of September 2019.
The bank recorded an impressive gross earnings income of N324.38bn, from N253.02bn in the comparable period of 2018, whereas profit ascended 59.02% up to N63.02bn, as against N39.63bn in the corresponding period. Despite the 25.5% increase in operating expenses, cost-to-income ratio improved to 61.0%, from 64.9% in 2018
The directors proposed an interim dividend of N0.25 per share, translating to a Dividend Yield of 3.62% on current market price, just as adjusted Price to Earnings ratio for the period stood at 0.91x, following which investors’ waiting period dropped significantly from 1.73x as a result of growth in its earnings power and the general down market condition.
Notwithstanding the improvement in Fee Income, overall Non-Interest Income weakened by 28.7%, owing to the much lower gains on investment securities at N4.1bn, as against the N59.6bn reported in 2018. The key drivers were the Derivative losses of N1.8bn in H1’18, as well as a gain of N33.4bn, and the much lower gain from equity investments of N5.9bn in H1’18 gain of N25.7bn.
The bank’s decision to tilt its robust balance sheet towards areas of opportunities was also shown within the review period, as investment and profit ratios remain strong and attractive. 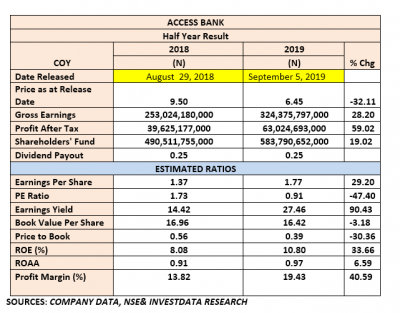 Return on Equity (ROE) and Asset (ROA) for the period under review stood at 10.80% and 0.97% respectively, as shown in the table above, Net Fee and Commission Income improved by 24.8%, supported by the 119.2% increase in Transaction and e-Business related fees and commissions, just as the 96.5% increase in account maintenance charges.

The price action of the bank reveals an imminent breakout of resistance level, following the impressive financials and interim dividend for income investors, despite serious attempts at a rebound which failed as a result of the prolonged bearish sentiment prevailing in the market and economy. The downtrend has been for almost two years, following which it made lower lows to resist further decline.
This rectangular chart pattern indicates a continuation or reversal of the trend. The strong support level of the bank in its pullback movement is N6.00 per share. The possibility of a breakout from the rectangle is high regardless of the mixed sentiments.
The Dividend Yields and low-price at the 3.62% yield and low market value, following which traders and Investors should look the way of Access Bank ahead of the breakout of its first resistance at N7.00 and the second resistant at N7.80. Alternatively, there could be a reversal to the first support level at N6.00 and second support price of N5.70. The trend momentum is weak at 29.36 points, despite its above 20 ADX.

Analysts Opinion/Recommendations
The undervalued nature of the stock and improvement in its earnings are evident, considering the projection for its 2019 financial year-end, especially as the stock continues trading at a 189.87% discount to our Fair Value estimate of N20.00 per unit.
However, we maintain a measure of skepticism nonetheless, given the unfriendly operating environment presented by the Nigerian economy, especially with the rate cut and insecurity across the entire northern Nigerian stretch and relative peace in several other parts, coupled with the delay in implementation 2019 budget.
On the strength of Access Bank, as well as the impressive and steady rise in its Book Value position over the last years and the short waiting period for as revealed by Price to Earnings ratio, the management must remain proactive with its Return on Equity (ROE) growth. We, therefore, maintain our BUY recommendation on Access Bank for traders and investors. 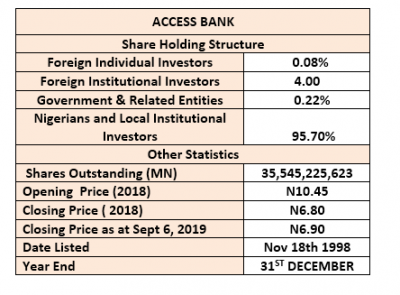 Healthy Balance Sheet and positive investment ratios
Access Bank’s strong retail banking prowess, boosted by the fusion of Diamond Bank, as well as the corporate and investment banking business segments have also further enhanced earnings and profit in the period under review. It will nonetheless enable the board to reward investors handsomely at the full year if the management maintains the current determination to ensure the newly acquired assets sweat optimal level. The ongoing consolidation of the merger will, no doubt, further enhance performance and show the bank a formidable competitor that it is poised to become, while delivering positive results in line with the Q1 and Q2 numbers, going into the future.
It is also noteworthy that the bank’s risk management and effectiveness improved, with cost-to-income at 61% from 64.9% in 2018. The relative stability in the Naira as the Central Bank of Nigeria (CBN) sustains its policy of defending the currency is an incentive for the bank, like its peers, to sustain offshore earnings through its operating network and in the process support bottom-line growth.

Valuation Analysis
Judging by its measurement and valuation metrics, the stock is currently trading at a 180.98% discount to our estimated fair value of N20, with a 24-month investment objective. In arriving at our fair value for the stock, we focused on the historical financial performance of the stock and our projection for full-year 2019.
Our Fair Value for Access Bank was calculated, using the Price to Book Value valuation method as well as the Dividend Discount Model, comprising our expected dividend estimate for the bank, adjusted for the risk of investing in the Nigerian Financial Services sector. We have placed a positive rating on the stock to buy. 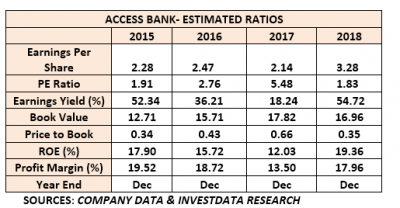