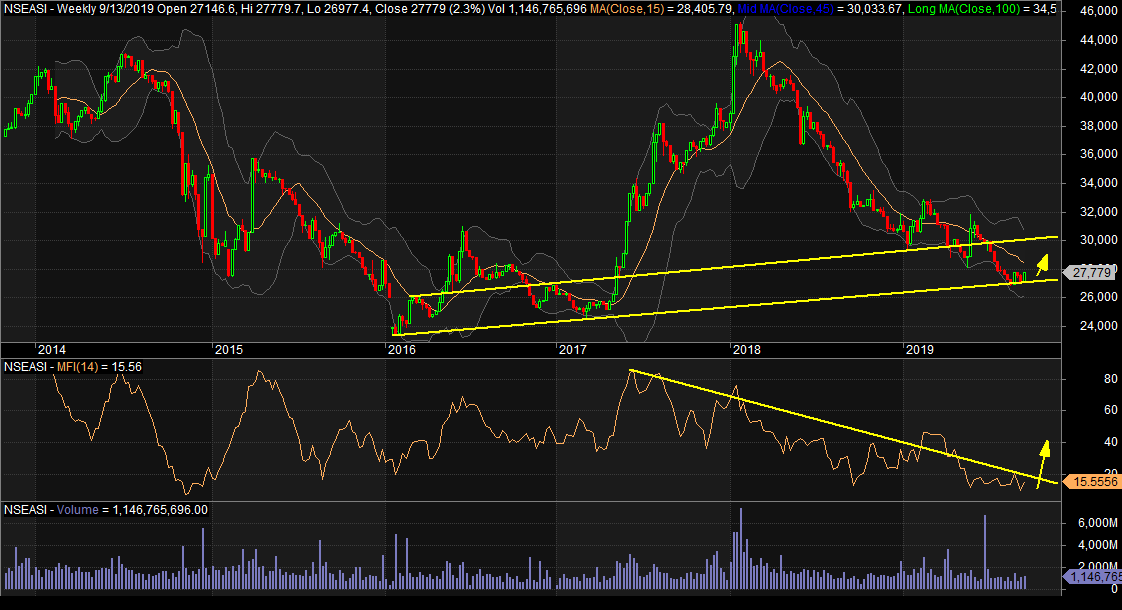 Post Views: 255 Market Update for the week ended September 13 and Outlook for Sept 16-20 The nation’s equity market had a mixed performance last week,...

Market Update for the week ended September 13 and Outlook for Sept 16-20
The nation’s equity market had a mixed performance last week, halting two consecutive weeks of selloffs, amidst rekindled buying interest by investors in highly capitalized stocks and blue chips at the midweek.
The interest waxed stronger thereafter, following which the week closed higher on positive external and internal political news, as central banks around the world returned to the era of Quantitative Easing (QE) to stimulate the global economy. There were also the effects of the positive outlook about the US and China dropping tariffs on some of their goods ahead of another negotiation meeting. This strengthened sentiment with many equity markets across the globe closing positive.
On the home front, we may not also overlook the judgement of the Presidential Election Tribunal, which at the midweek affirmed the victory of President Muhammadu Buhari at the February 23 polls, this may have calmed frayed nerves among investor, who now have a clearer political outlook, notwithstanding the decision of the main opposition Peoples Democratic Party (PDP) to seek redress at the Supreme Court.
The role and impact of government in investor’s portfolio and economic management cannot be overemphasized, because political stability and the state of the national economy drive productivity, consumption and investors confidence. These attract inflows that propel national growth and income. It is true also that government in any climate is the highest spender, besides providing an enabling business environment that sustains any progressive economy through policies and incentives. The monetary and fiscal policies are expected to complement each other, rather than conflicting as it appears in the case of Nigeria’s economy today. Economic news and data emanating from the government and its agency show a lack of coordination in policy formulation and envisioning an agenda capable of stimulating growth.
The Federal Government, last week, announced plans to reduce expenditure, as shown in its proposed 2020 budget size by 2.78% from N10.07trn in the 2019 budget as shown in its Medium Term Economic Framework (MTEF) 2020-2022 (READ MORE). In the same week, the government announced plans to raise Value Added Tax (VAT) from 5% to 7.2%, at a time the nation’s trade declined, as reported in the 2019Q2 Merchandise Trades Report released by National Bureau of Statistics with trade surplus of N588.8bn, from N831.6bn in Q1 2019 due to increase in imports and drop in exports. As a consuming nation with an economy that depends almost entirely on oil, whose price we do not have control over, there is no better time to stop paying lip service to economic diversification than now.
These, and many others have become sources of concern to many investors and businessmen, considering the current state of the economy, which does not require a conservative budget or a hike in VAT charges at this time.
Investdata believes that the effects of the twin moves of last week will negate what the monetary policy authorities are struggling to achieve with their earlier efforts to reduce inflation, boost productivity and consumption and others. This adjustment in VAT will lead to higher consumer prices, which will in turn spike inflation, while at the same weakening consumer spending and impact growth negatively. Even, if the government has reasons to raise VAT to fund the new minimum wage, the timing is wrong because it has not implemented the 66.67% increase in wage from N18, 000 to N30,000. Worse still, the Nigerian economy is still struggling.
Investdata Research believes also that the nation needs an expansionary estimate to stimulate economic activities capable of having multiplier effects on the national income, given the effects in increased productivity and consumption that will subsequently oil the macro-economy for good.
According to the NDIC, 98% of Nigerians have less than N500,000, which is $1,250 in their accounts, knowing that the poorest Nigerians are without banking accounts. On average, almost 60% of a Nigerian’s income is spent on food. This is across all segment including the rich, suggesting that many Nigerians spend 80% to 90% of their food. The government should, therefore, reconsider this hike in VAT and become more prudent, as it looks elsewhere for more revenue. For example, the Nigerian National Petroleum Corporation (NNPC), last time said it has saved N616bn from fuel importation. We believe such funds should be channeled into some projects.

Movement Of NSEASI
Meanwhile, the NSE All-Share index opened the week mixed and negative. losing 0.21% on Monday due to selloffs in high cap stocks, a trend that extended to Tuesday when the composite index lost 0.16% on negative sentiments. By midweek’s session, the market rebounded by 0.39%, coinciding with the tribunal’s affirmation of President Buhari’s mandate. The buying momentum continued on Thursday and Friday on the back of the positive global news and the subsisting low stock valuations with the NSEASI gaining 1.01% and 1.28% respectively. The positive sentiment impacted stocks like Nestle Nigeria, Guaranty Trust Bank, Seplat Petroleum, Airtel Africa, Ecobank Transnational International, and others. This brought the week’s total gain to 2.33%, as the index closed at 27,779.00 basis points, after opening the period at 27,146.57bps to reverse the previous week’s 1.38% negative position.
The week’s buying pressure was across all class of stocks, but mainly in high caps, following which the prevailing selloff was halted, as market players took advantage of low prices and interim dividend expectations to position. Market breadth for the period closed positive with advancers outnumbering decliners in the ratio of 39:19.
Within the week, the price of UBA Plc was adjusted for a 20 kobo interim dividend per share for the half-year ended June 30, 2019, the stock regained same day to set a new pattern for it price movement.
The momentum behind the week’s performance, however, remained weak as shown by the Money Flow Index at 15.56basis points, up from 10.29bps in the previous week, indicating that funds entered some stocks and the market on the strength of the improved political outlook and undervalued state of fundamentally sound stocks ahead of August inflation figure. Sentiment turned positive with a ‘buy’ position at 100%, while ‘sell’ volume was 0% on a transaction volume index of 0.77.

NSEASI Weekly Time Frame
As can be seen in the chart above, the NSE Index is indicating that the market has been on a downtrend, although attempting to reverse on double bottom chart formation pattern that supports the continuation of the trend. MACD on daily and weekly looks good as it has turned bullish on daily outlook. We expect bargain hunting to gather momentum in this new trading week.
The current chart pattern reveals a reversal, as the index continues to trade below the 20-day moving average, just as index action is on top of the lower band of the Bollinger, just as the Relative Strength Index reads 39.36. But then, Money flow is at 15.56 points on the weekly chart.

Mixed Sectoral Indices
The sectorial performance indices were largely bullish in the period under review, except for the NSE Insurance and Industrial goods indexes that closed lower at 2.13% and 0.41% respectively, while the NSE Oil/Gas index led the advancers, after gaining 7.19%, followed by the NSE Banking index’s 5.06%; just as the NSE Consumer goods notched 0.57%.
Market activities for the week were mixed as volume inched up by 4.55% to 1.45bn shares, from previous week’s 1.1bn units, while value declined by 20.89%, from N17.8bn to N14.08bn. During the week also, Stanbic IBTC listed additional 232,899,013 shares, being those of shareholders that opted to convert their 2018 full-year dividend to bonus shares.
The best-performing stocks for the period under review, were UACN Property and FBN Holdings, after topping the advancers’ chart with 51.52% and 24.14% gains respectively, closing at N1.50 and N5.40 per share on the back of recapitalization and low price attraction. On the flip side, Thomas Watts and Continental Reinsurance lost 9.52% and 7.98% respectively, closing at N0.38 and N1.50, on market forces and profit-taking.

Market Outlook
Being the third week of September, trading activities on the NSE will react to expected August inflation data, profit-taking, the global economic outlook and inflows arising from the 2019 budget implementation. However, discerning investors should take advantage of low valuation to key into interim dividend stocks and other undervalued equities that have strong potentials to rebound with the general market. The market’s downtrend is likely to reverse soon with strength seemingly returning after a long downturn ahead of the CBN Monetary Policy Committee (MPC) meeting slated for September 23 and 24.
Also, take into consideration the expected economic reforms as the government’s new cabinet swings into action, just as plans by the Central Bank of Nigeria (CBN) to reduce banks’ participation in government securities will expectedly boost private-sector lending, drive economic activities and investments.
The buying interest in highly capitalized stocks may continue due to portfolio restructuring. Hence, overall market performance may remain mixed, amidst the prevailing positive sentiments, breadth and low liquidly as market wait for the return of smart money.
Market players should maintain a cautious outlook due to the low investor confidence, liquidity and the wait for major economic triggers. Hence, we advise investors to trade cautiously in the short-term, with their gaze fixed on blue-chip stocks that are selling more than 40% below their 52-week high, as we await positive catalysts to drive market recovery.
That notwithstanding, we would not overlook the possibility of a bargain-hunting motive supporting positive performance, especially with many fundamentally sound stocks remaining underpriced. With the prices of major blue chips continuing to drop in recent weeks, we expect speculative trading to shape the market’s direction this week, despite the seeming negative outlook.