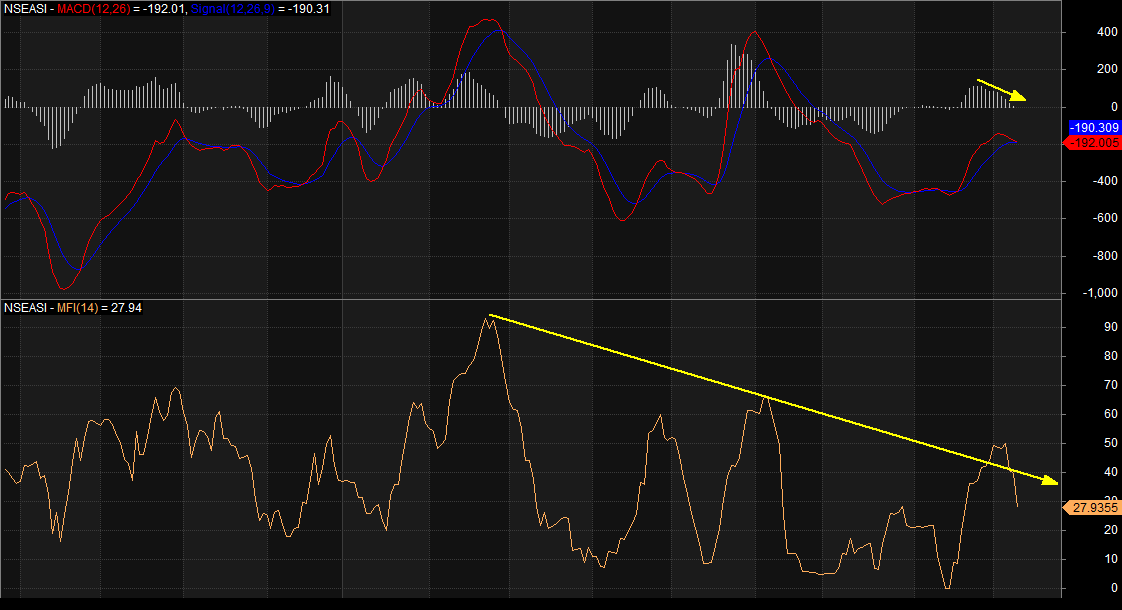 Market Update for September 10
Nigeria’s stock market moved lower for the fifth consecutive session on Tuesday, but attempted to retrace up as revealed by the candlesticks for the period, before pulling back on a high volume to make yet another lower lows amidst persisting indecision among market players on mixed economic data ahead of the release of August inflation numbers by the National Bureau of Statistics (NBS).
The continued mixed performance of the stock market in a downtrend in the first 100 days of the second four-year tenure of the Muhammadu Buhari administration shows the strength and impact of governance in the form of economic policies from the monetary and fiscal space. It is well known that these actions and inactions determine what investors and traders should expect from the market and economy in the nearest future. It is yet unknown whether Tuesday’s unveiling of the Federal Government new Medium-Term Expenditure Framework (MTEF), wherein it announced plans to spend N9.789tr in the 2020 fiscal year (READ MORE), even while the 2019 budget impact is still being awaited is enough stimulus to change the direction of the market. However, we note that increased liquidity from real-time economic stimulus will be necessary at this time if it will come.
As we have previously noted, some stocks that remain the most weather-beaten, year-to-date, have been trying to resist further decline and rebound, but for the persistent low liquidity and dwindling confidence among consumers and investors alike, in the face of growing concerns as to where the economy is headed.
Meanwhile, Tuesday’s trading started on the upside slightly and oscillated between mid-morning and midday before eventually pulling back by the afternoon to touch intraday lows of 26,977.36 basis points, from a high of 27,148.69bps. It then finally retraced up marginally within the last minutes of trading, closing the session lower at 27,047.58bps on mixed sentiments.
Tuesday’s market technicals were negative and mixed, with traded volume higher than previous day’s amidst a positive market breadth and mixed sentiment, as revealed by Investdata’s Daily Sentiment Report, showing ‘buy’ volume of 41%, while ‘sell’ position stood at 59% on total daily transaction volume index of 1.69.
The energy behind the day’s performance was weak, as Money Flow Index dropped to 27.94 points, from the previous session’s 39.64bps, an indication that funds exited some high cap stocks and the market in midst of selloffs and position-taking. The current stock prices and the earnings powers of companies as revealed by their half-year Price/Earnings ratios and the general market show that there are high upside potentials if the economy improves.

Attention: If you have not signed up for Investdata buy and sell signal setup, don’t delay. We have just added another risk management feature and new stocks of most revered traders and investors in corporate Nigeria to our watchlist. These stocks are with double potentials. To become a member, send ‘YES’ or ‘STOCKS’ to the phone numbers below. Take advantage of this service to buy right and sell right ahead of Q3 earnings reports portfolio reshuffling and repositioning ahead of fiscal and monetary policy catalysts.
The session decline was attributed to selloffs and profit-taking in stocks like Dangote Cement, Nestle, Forte Oil, CCNN and UACN, among others. The loss impacted negatively on the NSE’s Year-to-Date loss, as it climbed to 13.94%, even as YTD market capitalization gain dropped to N1.29tr or 12.27%, from the year’s opening level of N11.72tr.

Bearish Sector Indices
The sectoral performance indexes were largely in red, except for the NSE banking index which closed 1.00% up, while the Consumer Goods index led the decliners, after shedding 2.22%, followed by industrial goods index which slipped 1.61%; ahead of the 0.49% and 0.19% decline respectively by Insurance and oil/gas.
Market breadth was positive as advancers outnumbered decliners in the ratio of 19:12; while market activity in volume and value were up by 25.38% and 13.29%, respectively at 364.22m shares worth N4.86bn, from the previous day’s 290.49m units valued at N4.29bn. This volume was driven by heavy trades in stocks like Guaranty Trust Bank, Courtville Business Solution, Access Bank, Zenith Bank and FBNH.
UACN Property and FBNH were the best-performing stocks, topping the gainers’ chart with 8.47% and 7.53% respectively to close at N1.18 and N5.00 per share on the back of the proposed restructuring/divestment and low price attraction. On the flip side, Thomas Watt and Continental Reinsurance lost 9.52% and 7.36% respectively, closing at N0.38 and N1.51 on market forces and profit-taking.

Market Outlook
We expect the trend to slow down as bargain hunters take advantage of low valuation to trigger buying interest but any breakdown of this recent support level of 26,952.86 points will cause another panic but discerning investors should catch on it to average down because once there is direction through economic policies things will start change gradually as equity prices are underpriced, while investors watch these Sectors that have become defensive recently insurance, banking, industrial goods, services, and oil/gas ran true to bullish action in no distance time.