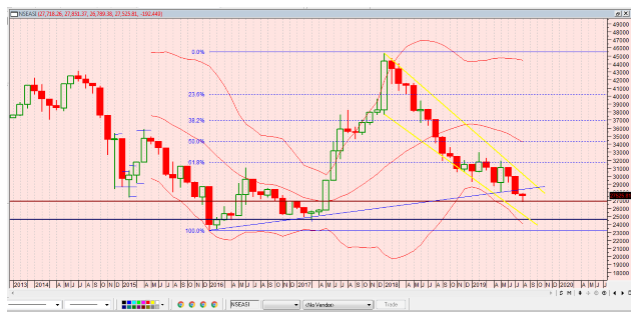 Post Views: 230 August Market Roundup Another bearish and mixed month ended on Friday, as predicted in the Investdata July market roundup, as the trad...

August Market Roundup
Another bearish and mixed month ended on Friday, as predicted in the Investdata July market roundup, as the trading in August remained volatile on a downturn in the midst of continued selloffs. In the heat of the volatility and downward slant, the share prices of over 30 companies hit new 52-week lows as indecision continued among market players, just as low liquidity prevailed during the period.
There were however some other factors that militated against the benchmark Nigerian Stock Exchange (NSE) All-Share index, ranging from mixed reactions and expectations from President Muhammadu Buhari’s new cabinet to the different posturing by the fiscal and monetary authorities on the nation’s debt portfolio. There was also the impact of the nation’s weak economic fundamentals, despite the seeming positive macroeconomic indices.
During the month under review, the composite NSEASI oscillated on the influence of a low price attraction and initially positive news of the appointment of ministers, following which the index broke down its psychological level of 27,000 basis points. It, therefore, hit an intra-month low of 26,789.38 basis points, from its high of 27,851.37bps, before closing the at 27,525.81bps on Friday, August 30, 2019, representing a 0.69% decline from an opening figure of 27,718.26 basis points. During the month also, market capitalization closed at N13.39tr, representing 0.89% value loss from an opening value of N13.51tr.
The magnitude of losses suffered within the month dragged the NSE index low, as it tested 26,789.38bps. During the period also, the market was down for 11 trading sessions and up in nine, besides witnessing a bear rally attempt in a rebound, as the market’s year-to-date loss position stood at 12.42%.
Despite the seeming rebound from the dip, the index remained among the worst-performing emerging markets in the globe and Africa, reflecting the myriads of challenges facing Nigeria’s economy and governance.
Investdata notes that NSE-listed companies posted mixed half-year numbers which revealed the state of the economy. However, these numbers seem relatively okay, given the prevailing low equity prices, following which the market remained attractive for income investors, ahead of Q3 upcoming earnings season. The undervalued state of some stocks, especially those with high potential to rally should guide traders’ positioning now.
The buying volume of total transactions for the month was 69%, while selling position was 31%, as it continued the three months of bear transition after the rebound in May was halted, even as volume index for the period was 0.57.
The market’s mixed trending was due to selloffs and profit-taking among high cap and blue-chip stocks.
Traded volume for the month was down by 9.64% to 4.22bn shares, compared to the 4.67bn units that changed hands in the preceding month. Market breadth for the month was negative with decliners outweighing the advancers in the ratio of 56:22 to extend the bearish trend.
The NSE Industrial Goods Index topped the sectoral performance chart for the period, gaining 1.63%, thereby outperforming the NSE benchmark index that closed in the negative. It was followed by the NSE Premium index’s 1.18%, helped by MTN Nigeria’s value appreciation.
On the other hand, NSE Gas/Oil was the worst-performing indexes, after shedding 12.16% as Seplat, Forte Oil, Conoil and Total Nigeria hit their New Year lows; followed by the NSE Insurance sector’s 7.68% decline, reflecting the high selling pressure on the shares of Continental Reinsurance and NEM Insurance, just as the NSE 30 lost 4.53% to reveal selloffs in blue-chip stocks. Other sectors that closed in the red during the month were: NSE Pension, NSE Consumer goods and NSE Banking with 4.35%, 4.10%, and 3.59% respectively to reflect investors and traders’ wait-and-see attitude. 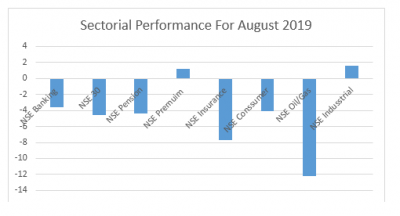 Best Performing Stocks
The month’s best-performing stocks were C & I Leasing which gained 32.73% of its opening price, after galloping on the strength of its quarterly earnings report that was released recently and market forces; followed by Berger Paints, which appreciated by 31.58%. CCNN rose by 28.86% in the period under view; just as BOC Gases chalked 20.71%; followed by JohnHolt, 19.57%; MTNN, 11.02%; Africa Prudential, 9.59%; AXA Mansard Insurance, 9.09%; and Sterling Bank, 8.70%; among others.

Worst Performing Stocks
The worst-performing stocks were Rak Unity Petroleum, which lost 25%, as a result of price adjustment for 10 kobo dividend; Continental Reinsurance Plc, 24.08% as a result of its weak Q2 numbers and selloff market trend; followed by the 23.30% drop in the price of Redstar Express; and UACN Property, 22.12% on the back of selloffs on unimpressive numbers by traders. 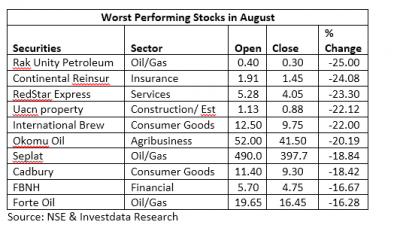 NSE ASI MONTHLY TIME FRAME FOR AUGUST
NSE Index has been trending down as revealed by the index action to form a bearish channel where the market closed within the channel after breaking down various support level to touch lower lows in the channel which has become the support and reversal imminent to create a new entering point for the discerning investor.

Where To Invest And Expectations For September & October
The global economy has remained unstable and gloomy as a result of the prolonged trade dispute between US and China, which seems to propel the recent slow growth in many developed economies as revealed by Q2 GDP data of these nations.
Back home, the seemingly positive economic data are yet to reflect on system, as low liquidity and money in circulation continue to slide, weak purchasing power, low productivity, and consumption persisted due to lack of economic direction and insecurity which the new cabinet are expected to address, going into future as they settle down for business and governance.
The nation manufacturing PMI expanded to 57.9ps in August of 2019 from 57.6ps in July. This figure points to the second consecutive month of faster expansion in PMI following a slowdown between May (57.8pts) and June (57.4pts). The expansion in the PMI is the fastest since February 2019, a situation attributable to the increased inventory build-up by importers of certain items that fell under the new Central Bank of Nigeria (CBN) forex restriction policy.
On the flip side, weak expansion was recorded in Production Level (58.7ps from 58.9ps), New Orders (57.1ps from 57.2ps), and Employment Level (57.1ps from 57.3ps). This we believe reflect the true broader economic position, as consumers’ purchasing power (to demand more items) did not improve in the said month.
It is expected that the PMI expansion would be sustained in the coming months. This will, however, depend largely on the implementation of the 2019 budget fully kickoff, as cabinet Ministers settle down after assuming office. The Federal Executive Council are expected to formulate policies capable of stimulating the economic policies and rolled out to propel growth.
The recently released audited half and full-year earnings reports by companies should give investors and analysts insight into how to reposition and rebalance their portfolios ahead of Q3 score-cards which will keep the market oscillating in the new month. The recent Q2 numbers are expected to strengthen market fundamentals as the business environment is expected to improve.
A few stocks still remain undervalued on the strength of their intrinsic value, a situation that should guide investors to know where to look while seeking to invest profitably for the rest of the year.
Traders and investors who understand the importance of combining fundaments and technical analysis in making investment decisions in the stock market should take this opportunity of pullbacks to the position in some sectors for short, medium and long term gains. This is especially true of the banking, agribusiness, building material, oil/gas, and consumer goods sectors, after carefully studying the recent price patterns and fundamental data available in the market.

What to expect in September and October
• Release of May/June full-year earnings (August is the end of the statutory 90-day for audited results). Numbers from blue-chip companies may strengthen market fundamentals if positive.
• The oscillating trend of equity prices as a result of the repositioning of portfolios along the line of positive numbers and profit-taking.
• Market outlook for the new month remains mixed as less quarterly and full-year scorecards are expected.
• Mixed sentiment and weak momentum as the investors expect strong economic reform policies with the implementation of the 2019 budget, just as the CBN sustains its intervention in the foreign exchange market, a situation that could reignite liquidity and confidence in the economy and market again.
• The relatively low Price to Earnings ratio in the market may further attract demand for stocks. But then, investors must invest wisely using bids, offers, and volume when making decisions as a trader.
• Managing risk and protecting capital at this point is very important, so you will determine when to buy or sell, by watching the stocks and the market, using technical analysis.
• Let numbers released by companies guide your decision and time to stay in that position.
To learn how to manage trading risk, get INVESTDATA comprehensive stock market trading and investing home study pack where short trading strategies and how to identify quality companies to invest.