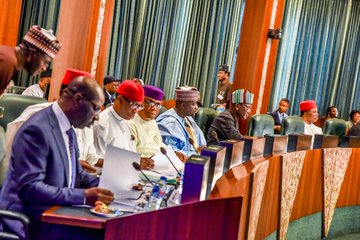 •States To Repay N614bn Budget Support Facility Over 240 Months
A 13 member ad-hoc committee set up by the National Economic Council (NEC) says Nigeria may lose as much as US$2.7bn this year alone, except evils such as crude oil theft, pipeline vandalism, and illegal oil bunkering are checked.
The NEC is chaired by Vice President Yemi Osinbajo and attended by governors of the 36 states of the federation and key cabinet ministers, among others.
The committee chaired by Governor Godwin Obaseki, while presenting its report to the council at its regular meeting in Abuja, said the loss was quantified based on the 22.64m barrel of crude oil loss valued at US$1.35bn as of 2019 half-year reported by the Nigerian National Petroleum Corporation (NNPC).
The annualized loss the committee noted in a report by ‘Laolu Akande, Senior Special Assistant to the President on Media & Publicity, Office of the Vice President, is based on the global oil price of US$60 per barrel.
A breakdown of the figure presented at the 97th regular meeting of the council show that a total of 9.2m barrels were lost through the Nembe Creek Trunk Line (NCTL) pipeline; followed by the Trans Niger Pipeline (TNP), 8.6m barrels; Trans Forcados Pipeline (TFP), 3.96m barrels; and Trans Escravos Pipeline (TSEP), 877,000 barrels.
The committee also noted the absence of a “governance structure for the pipeline such that no one is held accountable whenever there is a breach on the lines.”
It also noted the slow and inadequate prosecution of oil thieves, despite numerous arrests and seizures; and absence of petroleum products filling stations in most of its oil-producing Communities that make them resort to illegal bunkering and refineries. This situation, it added, was not helped by the huge internal and external markets for stolen crude oil like Ghana and some neighboring countries.
To check the problem, the committee made recommendations that will be presented to President Muhammadu Buhari, who is also Minister of Petroleum for the final decision and implementation.
The recommendations include restructuring of the maintenance of all pipelines so as to tackle the menace of oil theft, in addition to putting in place a legal framework that will ensure every criminal is prosecuted, imprisoned and all assets confiscated.
The committee also called for the setting up of special courts to try offenders, setting up of a legal task force to coordinate the prosecution of arrested offenders, besides training special judges to handle oil theft cases. The NNPC is also to engage the National Intelligence Agency (NIA) to identify markets for the stolen products; even as governors of oil-producing states must step up actions to develop their communities with the 13% derivation allocation while implementing programmes that will have an impact on the lives of the people.
The committee also urged such governors to create employment opportunities for the youths in these regions; just as it proposed an arrangement to be jointly funded by the Federal, State Governments and oil companies.
Vice President Osinbajo, also asked the NNPC to make a presentation to the council on the state of Premium Motor Spirit (petrol) and smuggling across the borders.
The governors requested clarification from the Osinbajo on the relationship between NEC and the newly formed Economic Advisory Council and were advised that both councils are advisory for the benefit of the President, but the NEC is established by the constitution.
According to him, “if NEC wants to be briefed regularly by the Economic Advisory Council (EAC), we will request the President to do that,” observing that such interaction will promote synergy.
Also at the meeting, the Minister of State for Budget and National Planning, Clement Agba, reported on the N614bn Budget Support Facility that state governments are expected to start servicing from September 2019, while repayment is over a 240-month period.
It was resolved that state governors should meet with the Ministry of Finance and Central Bank of Nigeria (CBN) to sort out repayment modalities, while the Vice President will ensure same and ensure the meeting among the various parties hold for a speedy resolution of the matter.
put balances in Excess Crude Account (ECA) as of September 17, 2019 at US$274,583,856.78; Stabilisation account, N23,796,349,487.76; and development Natural Resources Account Fund, N105,135,613, 817.27.