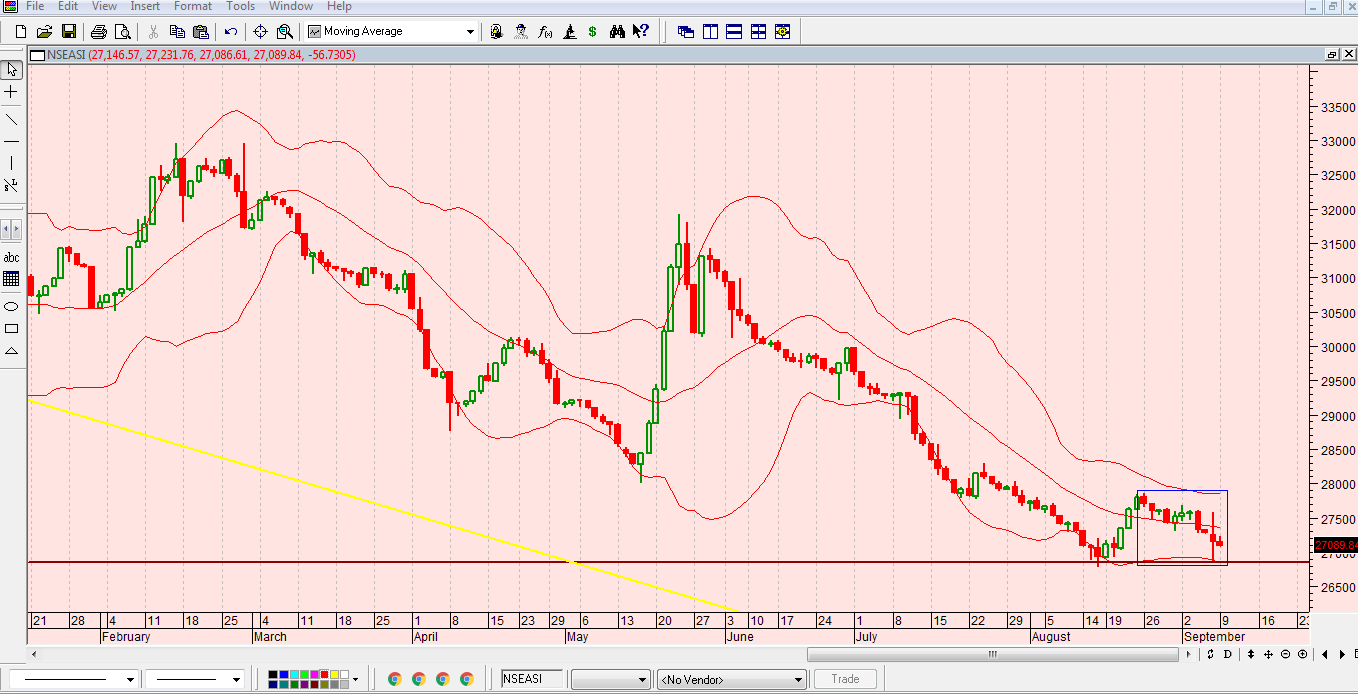 Market Update for September 9
Monday’s trading maintained the volatility and mixed sessions narrative as the benchmark index extended its downtrend on a high selling pressure due to investors concerns over the socio-political and economic situation in the country, especially with issues like heightening insecurity. Sadly too, its 100 days already in the second four-year term of President Muhammadu Buhari, but the government and its economic managers are yet to give the much-needed direction to trigger productivity and consumption. These will effectively change the recurrent stories of slow growth in the economy, such that expansion begins effectively.
The seeming mixed and positive economic indicators so far are an outcome of government trying to combine protectionism, free market, and mixed economic models or policies without giving any direction. Meanwhile, many companies continue to post negative earnings, while the stock market has maintained a downturn for almost two years, following which it now ranks among the worst-performing not only in Africa but the world.
Also, the slow implementation of the 2019 budget and the face-saving decision to rollover 60% of the plan into that of 2020 is not helping the economy, notwithstanding the promise by the government to present next year’s budget to the National Assembly before end of September. The 60% minimum Loan to Deposit ratio for banks as directed by the Central Bank of Nigeria (CBN) by end of this month will also inspire a new wave of lending, especially to retail customers. It is hoped that this will engender improved production activities and change the weak economic situation militating against big manufacturers and small scale businesses.
Trading on Monday opened slightly on the upside but remained stable and dull till midday to the afternoon before pulling back on selloffs and profit-taking in Nestle, Access Bank, and Stanbic IBTC at the last few minutes. This forced the market to close lower at 27,089.84 basis points after the Nigerian Stock Exchange (NSE) All-Share index had touched intraday low of 27,086.61bps, from a high of 27,231.76bps on a high traded volume.
The session’s market technicals were negative and mixed, as volume traded came lower than previous day’s in the midst of flat market breadth and more negative sentiment, as revealed by Investdata’s Daily Sentiment Report. ‘Sell’ volume of 98%, while ‘buy’ position stood at 2% on total daily transaction volume index of 1.40.
The momentum behind the day’s performance was weak, as Money Flow Index slipped to 39.64 points, from the previous session’s 40.71bps, an indication that funds exited some stocks and the market in midst of selloffs and profit booking. The current stock prices and the earnings powers of companies as revealed by their half-year Price/Earnings ratios and the general market show that there are high upside potentials if the economy improves.

Index and Market Cap
At the close of the day trading, the NSE All-Share Index shed 65.73bps, closing at 27,089.84bps after opening at 27,146.57bps, representing a 0.21% drop. Similarly, market capitalization lost N27.6bn, at N13.18tr, from an opening value of N13.21tr, which also represented 0.21% value loss.
Attention: If you have not signed up for Investdata buy and sell signal setup, don’t delay. We have just added another risk management feature and new stocks of most revered traders and investors in corporate Nigeria to our watchlist. These stocks are with double potentials. To become a member, send ‘YES’ or ‘STOCKS’ to the phone numbers below. Take advantage of this service to buy right and sell right ahead of Q3 earnings reports portfolio reshuffling and repositioning ahead of fiscal and monetary policy catalysts.
The day’s downturn was due to selloffs and market forces in stocks like Nestle, Stanbic IBTC, Access Bank, Dangote Sugar, Oando, FCMB, and Wema Bank, among others. The loss impacted negatively on the NSE’s Year-to-Date loss, as it climbed to 13.81%, just as YTD market capitalization gain dropped to N1.31tr or 12.89%, from the year’s opening level of N11.72tr.

Mixed Sector Indices
The sectoral performance indexes were largely bearish, except for the NSE Oil/Gas and Banking index that closed 2.72% and 0.51% higher respectively, while the Consumer Goods index led the decliners, after losing 2.86%, followed by Insurance and industrial goods index which slipped 0.32% and 0.02% down respectively.
Market breadth slightly positive as advancers outnumbered decliners in the ratio of 15:14; while market activity in volume and value traded were down by 6.67% and 33.39%, respectively at 290.49m shares worth N24.29bn, from the previous day’s 311.26m units valued at N6.44bn. Transactions were driven by trades in stocks such as Guaranty Trust Bank, FBNH, Transcorp Plc, Access Bank and UACN.
Again, UACN and UACN Property were the best-performing stocks which topped the gainers’ chart with 9.1% each to close at N6.60 and N1.08 per share on the back of their low price attractions and the proposed restructuring/divestment. On the flip side, Livestock Feeds and Lasaco Assurance lost 7.1% and 6.9% respectively, closing at N0.39 and N0.27 on market forces.

Market Outlook
We expect the trend to continue as bargain hunters take advantage of low valuation to trigger buying interest once the direction is given through economic policies, while investors watch these Sectors that have become defensive recently insurance, industrial goods, and oil/gas ran true to bullish action in no distance time.