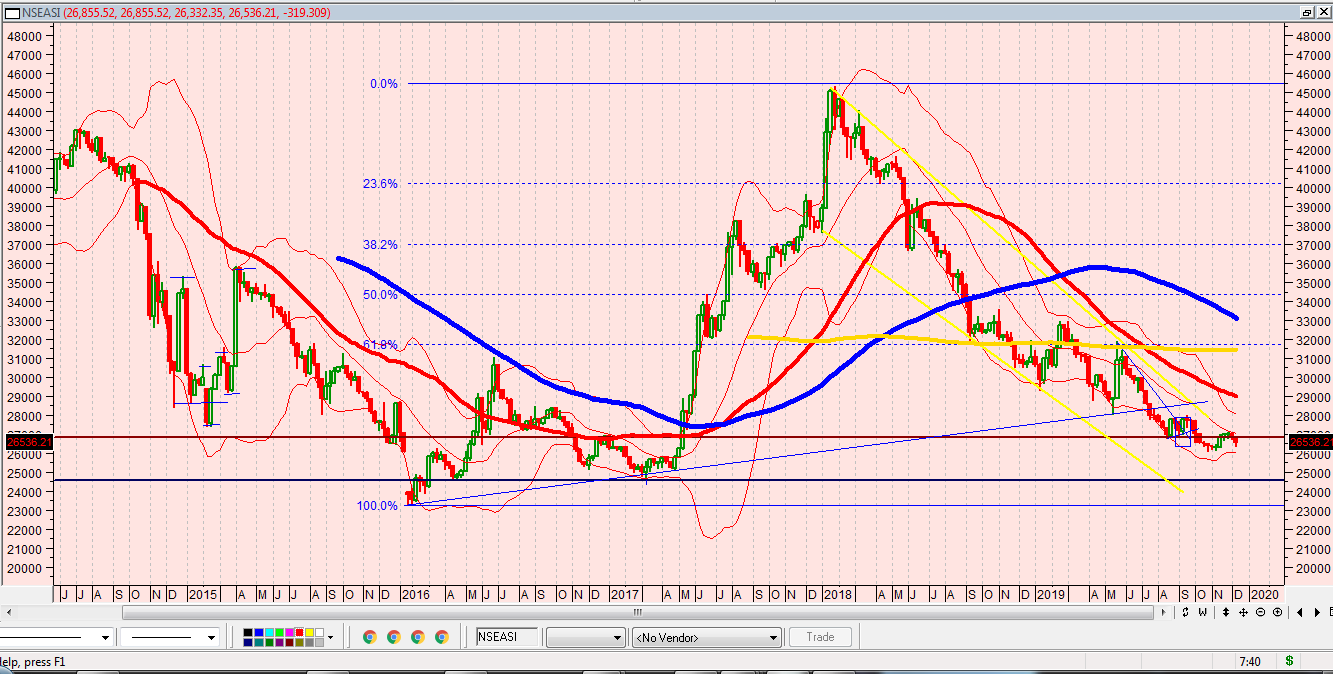 Mixed sentiment on the Nigerian Stock Exchange (NSE) continued last week as funds flowed in search of higher returns, despite the varied performance recorded in the period under review, extending the two weeks of bear-run.

This was attributed to profit-taking and indecision among market players after Moody’s downgraded Nigeria to B2 with a negative outlook, while the World Bank rated the nation lower than non-oil producing countries.

Within the week under consideration, over N1tr worth of OMO Bills and other fixed-income instruments, the lion’s share of which is expected to find its way into the equities or bond segments of the financial markets. We expect that pension funds managers and treasurers seeking to conserve capital may still look the way of Treasury Bills, despite the fact that rates are crashing to its lowest in the history of Nigeria, with 91-day bills hitting 5%, while the 182-day rate is going for 6.1%; and the 364-day also at below 10%.

This has further thrown real returns on TBs and other fixed-income market yields into negative, and as bond prices are rising, yields are declining. It is therefore expected that in order to hedge against inflation at 11.61%, more funds would be allocated to equities, going forward. That notwithstanding, most of these funds managers have adopted caution, despite the high dividend yields prevailing in the stock market, especially in the financial sector. Already, returns on pension assets or investments are threatened, because they are in single digit, at a time the inflation rate is at double-digit.

The recovery chart pattern this December will give an insight into what will happen in the first quarter 2020. Market readers and chart watchers will recognize this as a sign that a bullish market is underway, as discussed during Investdata’s Invest 2020 Traders & Investors Summit held on Saturday, December 7, in Lagos.

There, participants learnt from experts how to remain consistently focused and trade profitable, using various strategies, especially the earnings and dividend.

Given the changing dynamics in the nation’S financial market, amidst the low-interest rate regime in the money market, the stock market is likely to look up as factors in favour of the market are on the increase. Traders and investors should, therefore, take a timely position.

The global stock markets again had a mixed performance during the period under review, as concerns about US and China trade deals, elections in the UK, the unchanged interest rate in the U.S and the EU, as the Feds and the European Central Bank held their policy meeting during the week. The world’s positive economic outlook for 2020 is still shaking, especially against the possibility of social-economic and geopolitical tensions that may slow down activities in the new year.

Back home, the market extended its bear-run on a mixed sentiment and recovery attempt. The mixed performances were due to profit-taking, and the wait-and-see approach as the week’s trading opened on a negative note with the NSE Index losing 0.65%. This was sustained on Tuesday, as the losing momentum increased to 1.11% before being halted at the midweek with the composite NSE All-Share index gaining 0.19%, rekindling the buying interest. This continued on Thursday with the ASI chalking a further 0.51%, before reversing on Friday as the index fell 0.13% on a sell-down in high cap stocks, bringing the week’s cumulative loss to 1.19%. Within the period, the market opened for the week at 26,855.52 basis points, closing at 26,536.21bps, after touching an intra-week low of 26,332.35bps, on mixed demand for high cap and dividend-paying stocks, while traders targeted low priced stocks for short-term profit.

The week’s advancer table was dominated by low and medium cap stocks as top gainers, helped by increased buying interest in these classes of stocks for short-term profit, given the relatively small amounts needed to move price.  This was worsened by selloffs that hit highly capitalized stocks, creating buy opportunities ahead of the expected year-end rally.

Market breadth closed negative, as decliners outnumbered advancers in the ratio of 44:18, while momentum behind last week’s trading inched up was with Money Flow Index reading 52.10bps compared to 51.84 bps in the previous week. This is an indication that funds entered some stocks, despite the general market was down.

The week’s trading pattern showed indecision among players while accumulation was ongoing in some stocks with different price action patterns from NSE performance index. The lower rates regime is expected to reduce the cost of funds and consequently boost demand, thereby creating more employment opportunities.

Also, the Investdata Sentiment Report for the week revealed a strong buying pressure, with ‘buy’ volume at 39%, and ‘sell’ position of 61%, on a transaction volume index of 0.78.

The NSE benchmark Index’s action extended its pullback on the back of sell down and indecision among market players, remaining in a bearish channel as shown by the chart above. However, the reversal of this trend is a function of market forces, depending also on the November inflation reports, and the continued flow of funds into undervalued stocks. The weekly chart is forming a double bottom that supports a bullish reversal; while the daily chart kick-started the recovery, ahead of year-end window dressing by fund managers and quoted companies.

The index is currently trading below its 20-Day Moving Average on both time frames, even as volume traded increased. It also signals a high possibility of reversal any moment from now on positive economic news and compliance regulatory directive.  The Relative Strength Index read 36.03, indicating oversold. However, money flow is reading 52.10 points and looking up on the weekly chart.

The sectorial performance indexes for the week were largely bearish, except for the NSE Insurance and Oil/Gas that closed higher by 0.03% each, while the NSE Banking Index led the decliners, after losing 1.20%, followed by the NSE Industrial Goods with 1.15%, while the NSE Consumer Goods shed 0.46%.

Market transactions, in terms of volume and value for the week, were up by 9.47%% and 13.23% respectively, after traders crossed 1.04bn shares worth N14.46bn, as against the previous week’s 952.7m units valued at N12.77bn. This volume was majorly driven by trades in Union Diagnostic, UBA and Guaranty Trust Bank.

The best-performing stocks for the period were Presco and Dangote Sugar, which topped the advancers’ chart, after gaining 14.93% and 10.33% respectively, to close at N43.50 and N16.55 per share on low price attractive and rumoured buyout/backward integration plans. On the flip side, Charms and Union Diagnostic lost 18.92% and 15.38% respectively, closing at N0.30 and N0.22, on profit-taking and selloffs.

Being the full week before the Christmas holidays, we expect mixed performance in the new week, on profit-taking, capital wave and hope that fund managers would extend their position in undervalued equities with sound fundamentals. This is also based on the seemingly positive outlook for the domestic economy, ahead of policy statements and economic reforms.

Discerning investors, nonetheless, should take advantage of the current low stocks valuation to position for medium to long-term. It is noteworthy that the market is selling at a discount and therefore offers high upside potential.