Zenith Bank Plc presented its 2019 full-year audited financials through the Nigerian Stock Exchange last week in line with the post-listing requirement of the Nigerian Stock Exchange, as well as global best practice in good corporate governance practice. The timely presentation is expected to allow investors and traders to plan and take investment decisions about the future performance of the bank. Comparatively, the earnings report came slightly late, when compared to the presentation date of the 2018 numbers. We observe that the bank has maintained its tradition of improving its earnings capacity over the last two decades, a situation that has supported its high dividend payout and share price. This is notwithstanding the marginal 1.1% rise in the cost of risk, owing to the bank’s aggressive approach to lending, given that loans and advances improved by 26.46%, while effective cost and risk management helped the bank to further reduce its non-performing loan ratio.
Zenith Bank’s NPL ratio has remained below the regulatory 5.0% since 2018, dropping to 4.30% in 2019 from 4.98%in the 2018 position, a reflection of its improved credit quality.

We note that this is the first report card of the management team, under the leadership of Ebenezer Onyeagwu. It shows a sustained commitment to creating value for stakeholders at all levels, as revealed by its operational performance that continues to drive profitability and other investment ratios. We note also that this is the first audited score-card after the Central Bank of Nigeria began tinkering with the Loan to Deposit Ratio, which analysts say will weigh down on banks’ earnings, going forward.
Zenith Bank’s full-year statistics show a mild performance driven by non-interest revenue especially from trading income, while gross earnings and profitability levels increased, resulting 665 kobo Earnings Per Share from its N208.84bn bottom line, which was equally supported by fee income for the period.
However, the bank has set another new record, becoming the first Nigerian bank to cross the N200bn net profit region to remain the industry leader. The earnings and dividend yields of 34.20% and 12.85% respectively remain the point of attraction for discerning investors, which accounts for the mild positive investor reaction on the release date.
Gross earnings for the period under review inched by a marginal 5.1%, to N662.25bn, from N630.34bn in 2018, while bottom-line rose by 7.97% from N193.42bn in 2018 to N208.84bn. The drop in market value for the period reflected on the earnings yield, following which it moved to 34.20% as of released date, from 24.30% in 2018.
Although the banks operating expenses rose by 2.8%, we note the improvement in operating efficiency with cost to income ratio declining by 100bps, reflecting following which profit margin ratio stood at 31.54%, irrespective of the provisions for loan impairment, which climbed within the period to 30.81%. This, therefore, significantly ate into the bottom-line as reflected in the profit margin that inched up by 2.77% to 31.54% from 30.69% in 2018.
Shareholders’ funds improved by 15.47% to N941.89bn, from N815.75bn in the prior year; just as the 12-month Price to Earnings ratio for the period is 2.92x, which is lower than the 4.11x posted in 2018.
Book Value for the period stood at N30 per share, while return on equity for the year fell slightly down to 22.17% from 23.71% in 2018, just as growth in deposit base, as well as loans and advances, are signs of aggressiveness by management to make more impact in the economy and stakeholders. There is also the LDR of 54.09%, from 49.40% in 2018, just as liquidity and capital adequacy ratio remain above regulatory thresholds of 57.3% and 22% respectively. 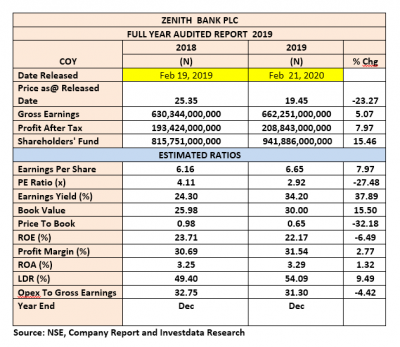 The bank’s aggressiveness in retail banking, corporate and ICT space has continued to drive its earnings capacity as reflected in investment and profitability ratios to actually reveal the high margin of safety of 51.13% from the market price of Zenith Bank as at released date. The retained earnings of 58% that have boosted the bank’s net assets and balance sheet, with retained profit up by 28.15% to N412.95bn from N322.24bn in 2018, a pointer to the fact that Zenith Bank is liquid enough to acquire any bank and at the same time support future dividend growth. The bank’s declining cost-to-income ratio at 31.30x, as against the 32.72x of 2018, and consistent growth in its book value are encouraging and exciting for discerning investors and traders, considering the nature of its services.

Valuation
Looking at the bank’s consistent growth in earnings on a quarterly and yearly basis, and despite the mild increases in current numbers, it has reduced the waiting period of investors’ at its Price to Earnings Ratio of2.92x, from the 4.11x position in 2018. On the strength of the 2019 financial year result, we upgrade the target price to N28.50. This guidance is indicative of stronger performance posted. Meanwhile, the Book Value of N30reveals the underpriced state of the bank, which is fairly priced at N36.

Analysts Opinion/Recommendations
As predicted in our review of Zenith Bank’s Q3 numbers that trading and fee income will support their profit line which actually was obvious in the released earnings report, despite the low-interest rate prevailing in the money market. Consequently, the recent cut in the bank charges, CBN policy on the Cash Reserve Ratio and over-regulation of its sectors may stand as headwinds in the current financial year. Traders and investors with short, medium and long-term goals, who desire to preserve capital, should look the way of this stock. As investment in the stock for the next 90 days, will beat any form of returns from the money market, Treasury Bills and bonds. We recommend a BUY for Zenith Bank 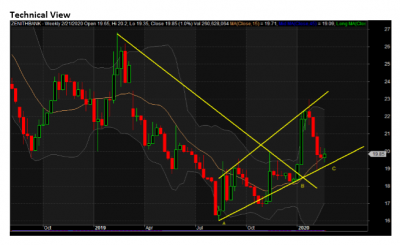 Zenith Bank’s price action over a three-year has been on the downtrend, breaking down various support levels to test a strong support level of N16, before rebounding and oscillating to breakout the downtrend line and the bearish channel. It is trending up within an up channel on a mixed sentiment. The candlestick formation at the bank’s financials signals reversal within the channel but depends on market forces in the new week. The bank’s RSI is reading 51.97 and Money Flow Index is looking down at 49.28 signal that funds are still exiting on a weekly time frame, but it is entering on a daily chart to read 55.83 indicating uptrend. For over six months, the bank’s price action has formed an upward trend pattern at the bull channel that supports the continuation of the trend. The bank is trading above its 20-day moving average on the weekly chart at N19.85per share. 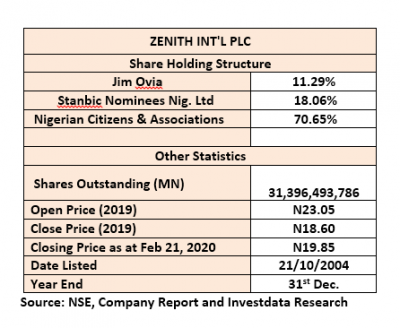 Four-Year Performance (2016-2019)
A critical look at the bank’s performance for the past four years shows a consistent improvement on the top and bottom lines, except for 2018 where it recorded a slowdown in the investment and profitability ratios for the period under review. The high and low performance of the bank is revealed by the numbers in the tables below. Its gross income for the period oscillated to reflect the changes in the economy, moving from N508bn in 2016 to touch the highest top-line for the period atN745.19bn before falling in 2018 to N630.34bn before rebounding in 2019 toN662.25bn, while profitability level has constantly been on the uptrend for the last four years with a growth of 61.1%to N208.84bn from N129.65bn posted in 2016.00. Earnings Per Share remained strong and steady at N6.65 regardless of the level of overregulation in the industry and the unfriendly economic situation, especially with the high Monetary Policy Rate (MPR), tight liquidity, rising inflation rate, dwindling discretionary income, and falling naira value. The bank’s earnings capacity rose from 413 kobo in 2016 to 566 kobo in 2017, and 616kobo and 665 kobo in 2018 and 2019 respectively, despite the various headwinds in the banking during the years. Its stable movement in Earnings Yield is a plus, despite the decline from 28.03% in2016 to 18.25% in 2017 and uptrend since then to 24.3% in 2018 and 34.20% in 2019.

The bank’s strategic risk and cost management efforts are paying off in its efforts to reduce non-performing loan ratio and improved profit margin to support the steady growth in terms of profitability, dividend payout and impacting the economy through its social responsibilities. Also, the bank has demonstrated its doggedness in retail banking and other factors that continually supports and drives profit. The bank’s branches within and outside the country, helped by the professionalism in service delivery at all levels, have demonstrated their capacity through the financials released over the past four years. Its innovations in its ICT platforms have contributed to making all the figures green. Investors, on the other hand, have followed the outstanding performances of Zenith Bank over time, taking strategic positions which continue to reveal value in its stock, while creating wealth as investors smile to the banks on biannual bases. Similarly, over the years, its Book Value has grown in the same direction from N22.44 per share in 2016 to N26.15 in 2017 to N25.98in 2018 and finally N30.00. On consistent earnings growth and Investor confidence, which is expected to support the price, given that valuation tools place the bank’s stock at N36per share. 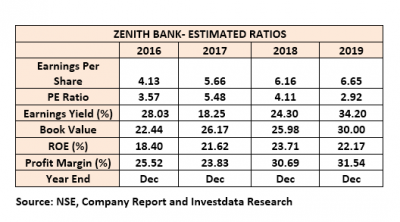