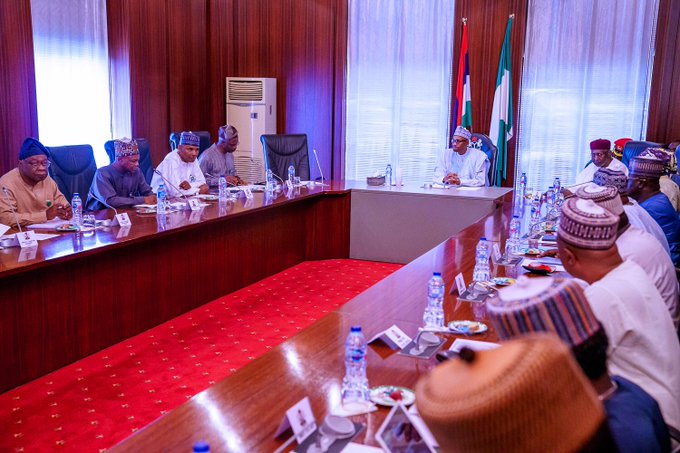 The Prof. Adedoyin Salami-led Economic Advisory Council, on Thursday held its maiden meeting with President Muhammadu Buhari, and urged the Federal Government to immediately tackle the challenge of coordination gaps among its Ministries Department and Agencies.
In a series of tweets on his personal twitter handle, as well as Garba Shehu, the President’s spokesman, Buhari described the council’s preliminary report as “very thorough,” just as “they made important recommendations which will be incorporated into our policymaking.”
He assured that Boss Mustapha, the Secretary to the Government of the Federation has been directed to immediately address the observed lapses in coordination between ministries and all agencies of government as recommended by the council
He warned that “the lack of synergy between ministries, departments and agencies will no longer be accepted.
“We are working for the country, not for personal interests. We have the same objective of service to the people and we will resolve this,” the President stressed.
In a review of the council’s work since its inauguration to replace the Economic Management Team (EMT), President Buhari expressed pleasure at the submission as contained in the executive summary.
He noted “the painstaking thoroughness of your preliminary report. I have noted the salient points of your report and these will be incorporated in government economic policies.”
Speaking about the challenges facing the economy and the tasks that rest on the shoulders of the members, the President noted that “the economy is the most delicate and sensitive of all aspects of national life.
“A little change in the matrix can lead to major disruptions in the national economy. For example, international changes in oil prices, bad harvests, conflicts in strategic global locations, a major epidemic or pandemic like the current Coronavirus, tariff changes in major world economies, to mention only a few examples that readily come to mind, can significantly affect our plans.”
President Buhari, who accepted that the EAC should now brief him more frequently, at least once every six weeks, instead of once every quarter, thanked the members for their patriotism and commitment in accepting the challenging responsibilities conferred on them.
While appreciating the work of the Chairman and his team for their patriotism and commitment to this work, he said the government looks “forward to our next meeting. We have agreed that these briefings should now happen more frequently.”
While submitting their report earlier, according to twitters by Garba Shehu, the President’s spokesman, “Prof Salami, supported by interventions by Council members, responded to questions by the President and his team in which they outlined a number of challenging opportunities facing the economy, and proffered solutions to most of them.”
Members of the committee are: Dr. Mohammed Sagagi, Vice-Chairman; Prof. Ode Ojowu; Dr. Shehu Yahaya; Dr. Iyabo Masha; Prof. Chukwuma Soludo, a former Governor of the Central Bank of Nigeria; Bismark Rewane; while Dr. Mohammed Adaya Salisu, Senior Special Assistant to the President on Development Policy, is the council’s secretary.