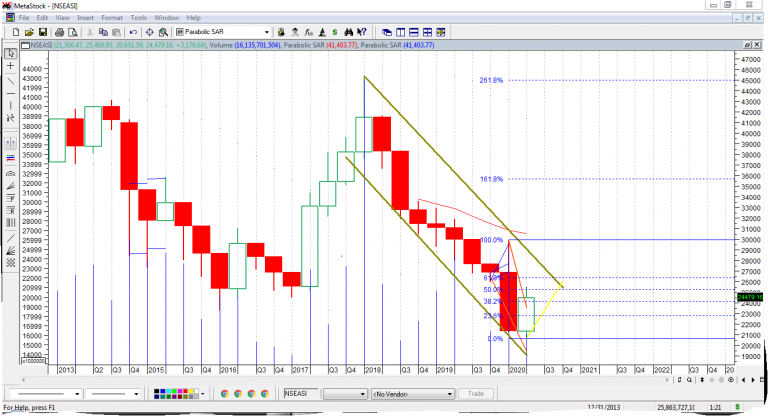 The Nigerian stock market, and indeed, its economy recorded a mixed performance for the first half of the year 2020, a year that has so far been full of surprising shocks, with equity prices and macroeconomic indices tumbling on the back of so many factors previously unforeseen by the best of forecasts, arising from the novel Coronavirus (COVID-19) pandemic that changed economic dynamics.

The period under review has forced the Central Bank of Nigeria (CBN) Monetary Policy Committee to adjust the benchmark rate downward to 12.5% and Cash Reserve Requirement (CRR), while interest rate on its various intervention packages was cut to 5%. This and other were responses to the negative effects of the pandemic as it hit stock markets across the globe and sent crude oil prices crashing helplessly to 21 year low in the international markets.

The Nigerian Stock Exchange (NSE) was not left out, as it touched its 11-year low in March on massive panic selloffs driven by the impact of the deadly virus and fear of the unknown. The sharp decline in crude oil price led to the review of Nigeria’s 2020 budget and crude oil production and benchmark price more than twice as government panicked, given that it remained a single major source of revenue for the country. Experts say this is a call for a whole-hearted economic reset and a call for government to begin the much needed economic diversification that many administrations have deceitfully mouthed, as well as restructuring the country to become a true federation.

Also noteworthy is therebound of the market in Q2 on the positive sentiment of oil price recovery, and increased liquidity as foreign investors that earlier sold down to exit the market repositioned on low prices because they were unable to exit at the CBN’s Investors & Exporters’ window of the foreign exchange market. This rebound was also supported by the two-month extension of the release date for the 2019 full-year and 2020 Q1 corporate earnings from to May and June respectively.

In the period under review also, the nation’s inflation rate remained on the rise. It has been on the increase for over 11 months, increasing from 11.02% in August 2019 when the Federal Government closed the nation’s land borders, triggering an astronomic rise in the prices of goods and services. The situation was further made worse by the worsening panic buying arising from event since the advent of COVID-19, as well as the rising insecurity situation and the hike in transportation cost. Nigeria’s inflation jumped to 12.4% in May 2020.

The mixed economic policies of the government and impact of COVID-19 reflected in the 2020Q1 GDP that slowed down to 1.83%, from 2.24% in 2019Q4, a sign that the nation is gradually sliding into another recession. This was not unexpected, especially given that the Q1 corporate earnings were mixed and below expectation. There also a possibility to the fact that Q2 numbers would be disappointing given the situation of the economy, with the lockdown. Already the weak macro-economic indices released, so far, especially the Purchasing Managers Index (PMI) which remained below the 50-point threshold, signaling a weakening manufacturing sector and low industrial output after recording two consecutive months of decline at 42.1 and 41.1 points in May and June respectively.

This, when considered alongside the rising inflation data have confirmed the possibility of an economic contraction, even as it disconnected from market fundamentals. Amidst the shaky economic fundamentals, the government and CBN have provided various stimulus packages to ensure the impact of the COVID-19 pandemic is not as severe on the economy as being forecast.

The early passage of the 2020 Appropriation Bill and is signing into law, coupled with the uncertainties surrounding the global coronavirus pandemic, have already altered all previous forecasts in the period under review.

Meanwhile, the composite NSEASI in the first half of the year lost a total of 2,352.91 basis points, closing at 24,478.16bps,  from the 26,842.07bps it opened, representing a decline of 8.8% as 41.16bn shares were traded, down from the 29.38bn units traded in the previous half-year. The selling pressure for stocks increased on sharp disconnection from economic condition that reflected in the Q1 unimpressive corporate numbers with investors expressing worry already due to the high probability of a dividend cut at the end 2020 financial year.

The selling volume of total transactions for the period was 41%, while buying position was 59% as it maintained the same down market for same period in 2019. Similarly, market capitalisation for the period dropped by N188.57bn at N12.77tr, from an opening value of N12.96tr, representing 1.46% depreciation in value. This was due to mixed sentiments as market fundamentals differed from the economic realities, despite the unstable crude oil price as well as the socio-political environment.

No doubt, the recent recovery in the equity market signals huge opportunities and upside potentials for stocks after the Q2 earnings season, even as recovery in the second half of the year is expected to enhance subsequent corporate earnings that will further drive prices, if the numbers improve.

This has created investment opportunities in the market, even as risk management remains key amidst the continued cautious trading and investing, as investors seek to protect their capital.

Market breadth for the period was negative and weak as the number of decliners outpaced advancers in the ratio of 68:24 to extend the bearish transition of 2019, after the market had suffered three consecutive years of downturn.

As shown in the sectoral performance chart below, the Consumer Goods Sector depressed the market the most in the half-year period losing 24.12%, more than double that of the composite NSEASI. It was followed by the banking index that fell 20.46%, while the NSE Oil/Gas dropped by 16.08%. Other sectors that suffered losses were: Main board, Pension and NSE 30, even as the NSE insurance, Industrial Goods and Premium indexes closed higher, rising by 6.29%, 5.30% and 2.41% respectively.

The best and worst-performing stocks in the first half of the year are listed in the table below.

Of the 24 stocks with share prices appreciation, 11 gained over 20%, compared to their closing value at the end of last year, with Neimeth Pharm as the best performing, after gaining 189.47%, helped by positive sentiments on the Federal Government and CBN interventions in the healthcare sector of the economy to check the impact of COVID-19. The price movement followed expectations that the move would boost the industry’s earnings power and profit. It was followed by the 106% rise in the price of Law Union and Rock Insurance, helped by the insurance industry recapitalization that investors hope would result in enhanced capacity and far better performance in subsequent financial years. It was followed by May & Baker, another healthcare stock topping the chart with 48.70% gain, among others.

The worst performing sectors in the period under review were manufacturing sector (Consumer Goods), Banking and Oil/Gas, followed by services providers. The half-year’s worst performing stocks in terms of share price movement were brewery companies, whose sales had dropped, led by International Brewery, which shed 56.84% on account of weak earnings and selloffs, as the company failed to pay dividend for the third consecutive financial year ended December 31, 2019. It was followed by Guinness Nigeria with a 61.75% decline in value, due to its dwindling earnings and poor payout, ahead of the release of its financials for the full-year ended Jun 30, 2020; Chams lost 43.24%; and Nigerian Breweries, 37.70%.

See others on the table below:

Technical View Of The Market

The NSE index action for eight consecutive quarters have been on the downtrend, due to mixed sentiments, as well as the shaky market and economic fundamentals before trying to resist decline in the just ended quarter, despite weak economic reality. This movement revealed a lack of confidence in the economy and its managers. The inconsistent policies and implementation style of the government and regulators have not helped matters before now, a situation that has been made most glaring by the Coronavirus outbreak which also exposed the lack of planning and savings on the part of government and its agencies.

Where to invest/Expectation For 2020 H2

The market and indeed the economic outlook for the second half of 2020 are becoming unpredictable and unstable, due to the continuing rise in new cases of the novel Coronavirus infections amidst the impending globally recession whose impact various governments,  regulators and multilateral agencies are working to reduce.

The shaky macroeconomic indices are indicating that all is not wellwith the domestic economy in the face of ravaging pandemic, which has exposed Nigeria’s economic vulnerability pushing it into what has been described as the worst recession in all of 40 years, expected to be confirmed by the Q2 GDP data. As mentioned earlier, key data like the manufacturing sector’s PMI released by the CBN showed a further decline in the month of June to 41.1 points, down from 42.1 and 51.1 points in May and March 2020 respectively. This reflects the sustained contraction and rising level of unemployment, with many experts calling for a total overhaul of Nigeria’s socio-political and even economic superstructure.

Ahead of the Q2 earnings reports, funds are still leaving the nation’s equity market for safer investments windows, and from one sector to sector as investors align their portfolios towards companies expected to benefit from the ongoing pandemic. These are companies whose earnings are expected to beat market expectations for the good of investors

For this third quarter and rest of the year, this weak economic data are expected to change due to the impact of government intervention and likely economic recovery.

With the second quarter earnings reporting season kicking off this month, it could expectedly prolong the assets revaluation and depress price due poor corporate performance.

Traders and investors who understand the operations of the stock market and the economic cycle know that they are instruments to identify leading sectors and at the same time forces behind price performance so far to take advantage and position in those sectors for medium to long term gains. This is especially true of the telecommunication sectors, as well as the healthcare and agribusiness companies.

Meanwhile, the 2020  half-year financials due to be released soon should help investors project whether the companies are likely to post better Q3 outings or not after studying the target company’s 2019 full year numbers and Q1 2020 earnings to show trend and direction.

Equity price movements as we have always noted in INVESTDATA, is a function of earnings and dividend payment at any time. This is in addition to information emanating from these companies that are expected to attract more market players, dividend investors and possibly foreign bargain hunters to the market.

INVESTDATA analysis shows that over the past three years on the Nigerian stock market, the month of July and August have been bearish, despite being an earnings reporting season which suggests that traders should be cautious and watch their position when the numbers start rolling. This will enable the investor know when to cut loss immediately and move to other stocks that are already on their watch list.

What to expect in July and August

Again, the current undervalued state of the market offers opportunities to position for the short, medium and long-term, which is why investors should target fundamentally sound, and dividend-paying stocks for possible capital appreciation going forward. Also, traders and investors need to change their strategies, because of the NSE’s pricing methodology, the CBN directives, and their impact on the economy in the nearest future.

NB: The home study packs of our Invest 2020 Opportunities and Trade Ideas Summit, containing different Stocks for various investment objectives in 2020 and beyond, How to invest or trade profitably in changing market dynamics and recession and mastering earnings season for profitable investment are available. To obtain your pack send ‘Yes’ or ‘Stock’ to 08028164085,08032055467, 08111811223 now.