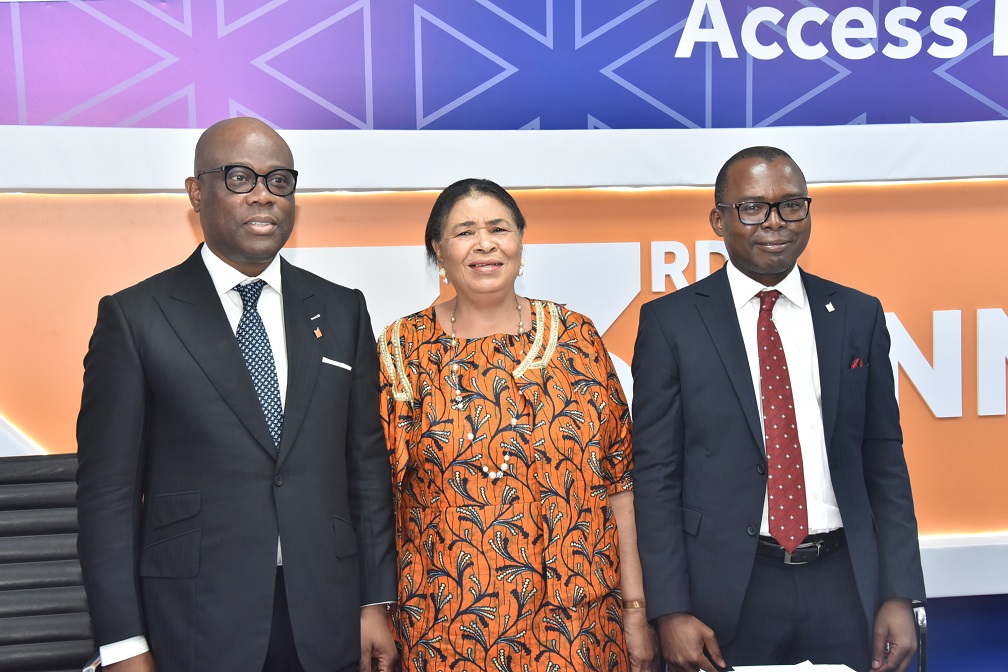 The board of Access Bank Plc, on Monday, announced the completion of its Scheme of Arrangement with holders of its fully paid ordinary shares of 50 Kobo each, resulting in the listing of Access Holdings Plc as the parent entity of the bank and related group companies on the Nigerian Exchange Limited.

The bank, it said in a statement to the NGX by Sunday Ekwochi, the Company Secretary, was subsequently delisted; following which the board of Access Holdings announced the appointment of  Bababode Olukayode Osunkoya, an independent non-executive director as chairman, Herbert Wigwe, Group Managing Director, a position he held in the bank until now, and Bolaji Olaitan Agbede, executive director.

The group also announced the appointment of Roosevelt Ogbonna, a chartered accountant and former deputy managing director of the bank since 2017, as new chief executive, from May 2, 2022.

The statement also announced the resignation of Adeolu Bajomo, as Executive Director, Information Technology and Operations with effect from September 30, 2022, following “his decision to pursue other personal interests.”

Bajomo, the group affirmed, “confirmed that he has no disagreement with the Board and there is no matter relating to his resignation that needs to be brought to the attention of the regulatory authorities.”

Osunkoya, whose over 30-year career has traversed banking, accounting, asset leasing and consulting, is the Managing Partner at Abax-OOSA Professionals (Chartered Accountants), prior to which he worked as the Principal Partner of Bababode Osunkoya & Co from 1994-2007. He commenced his career in 1984 at Premier Hotel Limited, Ibadan, where he had his mandatory National Youth Service Scheme, after which he joined Z.O. Ososanya & Co. (Chartered Accountants) in 1985 and distinguished himself, rising to the position of an Assistant Audit Manager in 1988. He, thereafter, moved to Abacus Merchant Bank Limited, where he worked between 1989 and 1993 and rose to the level of a manager, among others.

Wigwe, a transformational leader, seasoned banker, and financial expert with over three decades of professional experience, joined Access Bank in March 2002 as Deputy Managing Director to co-lead its transformation to world class financial services provider, becoming its Group Managing Director/Chief Executive Officer, 12 years later in 2014. He commenced his career at Coopers & Lybrand, Lagos as a management consultant before qualifying as a Chartered Accountant, before a stint at Capital Bank, from where he joined Guaranty Trust Bank and spent over a decade working in the Corporate and Institutional Banking Division, where he rose to the position of Executive Director in charge of Institutional Banking.

The Fellow of the Institute of Chartered Accountants of Nigeria, and the Institute of Credit Administration, and Honorary member of the Chartered Institute of Bankers of Nigeria (CIBN), is chairman of Access Bank subsidiaries in Ghana and UK, and Access Investment & Securities Limited. Wigwe is also a Non-Executive Director of Central Securities and Clearing System (CSCS), as well as Unified Payments Services Limited. He is also on the board of Nigerian Mortgage Refinance Company Plc and NG Clearing Limited.

The statement described Ms. Agbede as a versatile professional with over 27 years’ experience in Human Resources management, customer relationship management and banking operations, with proven record of successful people integration during mergers and acquisitions, culture transformation and execution of corporate strategies.

She commenced her professional career in Guaranty Trust Bank and served in various capacities within the Commercial Banking and Operations functions, rising swiftly from Executive Trainee level to manager in the 9 years between 1992 and 2001. She subsequently served as the Chief Executive Officer of JKG limited in 2003 a business consulting outfit, from where she joined Access Bank in 2003 as an Assistant General Manager, responsible for managing the bank’s portfolio of chemical trading companies. She became Head, HR of the Access Bank Group since 2010, overseeing the human capital development of the group.

Holder of a 1990 Bachelor’s degree in Mathematics and Statistics from the University of Lagos, the member of the Chartered Institute of Management UK and Chartered Institute of Personnel Management of Nigeria, subsequently obtained a Master of Business Administration degree from Cranfield University in 2002. She has attended several renowned leadership and professional development programs including the High-Performance Leadership Programme organised by the IMD and the Strategic Talent Management Programme organised by the London Business School.

Other members of the board of Access HoldCo include Abubakar Aribidesi Jimoh, also an Independent Non-Executive Director, a versatile professional with experience in client relationship management, treasury, market risk, credit risk management, operational risk management, project and portfolio management. He is the Group Managing Director of Trustbanc Group a leading investment management firm, before which he led the transformation of Associated Discount House (ADH) from to a Merchant Bank (Coronation Merchant Bank Limited). Prior to joining ADH, he was a General Manager and Divisional Head at the UBA Group with responsibility for balance sheet management, market risk and investors relations. He was also the Chief Risk Officer for various business segments including UBA Africa and UBA Capital.

He worked with the Royal Bank of Canada Financial Group between 1999 and 2005 in various capacities, and was Chief of Internal Control Officer and Divisional Chief in charge of Private Sector Portfolio Management with the African Development Bank between 2005 and 2008, among others, Holder of a Bachelor’s of Science and a Master’s of Science in Finance from University of Lagos, he is a Chartered Financial Analyst and an Associate member of of ICAN and CIBN, a Chartered Internal Auditor and Certified General Accountant of Ontario and Canada.

Mrs. Fatimah Bintah Bello-Ismail, a lawyer of over 36 years, she began her legal career at the Department of Public Prosecution at the Federal Ministry of Justice Lagos before working as a Counsel at Kehinde Sofola & Co, one of the top law firms at the time. She also worked at the Nigerian Social Insurance Trust Fund (NSITF) and Continental Merchant Bank (formerly Chase Merchant Bank), before becoming the Managing Partner at Universal Chambers- a financial, commercial and legal services firm.

She graduated from the Ahmadu Bello University Zaria, in 1984, was called to the Nigerian Bar in 1985, a former Council member of the Nigerian Stock Exchange, and currently serves as a Non-Executive Director on board of Nigerian Exchange Group Plc.

Mrs. Ojinika Nkechinyelu Olaghere, is the Managing Director of Rickela Consulting Limited, a management consultancy business involved in training, capacity building, coaching and advisory services. The seasoned professional with over 33 years’ experience in banking, administration and consulting, joined Access Bank Plc in 2007 as a General Manager in the Enterprise Resource Support Group where she spearheaded the seamless rationalisation of the Bank’s assets following the acquisition of Intercontinental Bank. She retired from Access Bank Plc in June 2018 as Executive Director, Operations and Information Technology, during which time she ensured the seamless upgrade of the bank’s major IT infrastructure as well as the Operations Transformation Programme which resulted in the bank being ranked amongst the top five in KPMG’s 2018 Banking Industry Customer Service Survey.

Prior to joining Access Bank, the Bachelor’s of Arts degree holder in French Language from the University of Nigeria, Nsukka and Fellow of ICAN, spent 16 years with Ecobank Nigeria, where she worked in the Operations and Consumer Banking Groups.

Olusegun Babalola Ogbonnewo, has over 30 years’ experience across banking, human capital development, operations and technology, payment systems and fintech, and is currently the Operating Director, Tengen Family Office. Prior to this, he occupied several roles in Access Bank Plc between 2006 and 2017, including Group Head, Channels Services; Head, Transaction Services Division; Group Head, Domestic Payments; Group Head, Central Processing Centre Group; a Group Head, Settlements and Payments. He also served in various capacities in Guaranty Trust Bank between 1993 and 2006 including Head, International Settlements, and Divisional Head, Banking Operations and Information Technology. He was HR Officer, Branch Manager and Programme Officer in Peoples Bank Nigeria Limited between 1990 and 1992.

Oluseyi Kolawole Kumapayi a highly accomplished and result-driven professional with over 20 years of banking experience across Finance, Strategy, Risk Management, and Treasury, joined the bank in 2002 as the Head of Financial Control and Credit Risk Management. Prior to joining Access Bank, he held controller and analyst positions in First City Monument Bank Limited and Guaranty Trust Bank Plc respectively, and was the Group Chief Financial Officer of Access Bank Plc from 2008 to November 2020, when he was appointed as the Executive Director, African Subsidiaries.

A graduate of Harvard Business School, the ICAN fellow who is a member of the Global Association of Risk Professionals (GARP), CITN and CIBN, who is also a board member of the Ogun State Security Trust Fund, holds a Master’s degree in Mechanical Engineering from the University of Lagos, and a Bachelor’s of Science degree in Agricultural Engineering from the University of Ibadan.

Board members of the banking subsidiary are: Ogbonna, a natural choice in line with the effectiveness of the group’s robust succession planning arrangement, having been the DMD of the bank since 2017; Victor Etuokwu, DMD, Retail North; and Mrs. Chizoma Okoli-Deputy Managing Director, Retail South.

Etuokwu, with about decades of banking experience cutting across Operations, Information Technology, Business Development and Retail Banking, was appointed an Executive Director of the Bank in 2012 and his appointment was renewed in 2022 following the expiration of his second term. He commenced his professional career in Citibank Nigeria where he served as Head, Operations and Records and Reconciliations, joining Access Bank in 2003, leading several critical projects including the mergers with the defunct Intercontinental Bank Plc and Diamond Bank Plc.

Holder of a Bachelor’s of Science degree and a Master’s in Business Administration from University of Ibadan and University of Benin respectively¸ he is an Honorary Senior Member of the CIBN and represents the bank on the boards of E-Tranzact Plc and Unified Payments Services Limited. He also sits on the Board of Access Pension Fund Custodian Limited.

Mrs. Okoli also has over three decades of robust banking experience, beginning in 1992 as an Executive Trainee in the defunct Diamond Bank Plc where she distinguished herself and rapidly rose through the ranks to become an Executive Director in 2016. Following the Bank’s merger with the defunct Diamond Bank in 2019, she was appointed Executive Director, Business Banking Division. She obtained a Bachelor’s of Law degree from University of Benin and a Master’s in Business Administration from Warwick Business School, United Kingdom. She is an Honorary Senior Member of the CIBN and a Member of the Institute of Credit Administration of Nigeria.