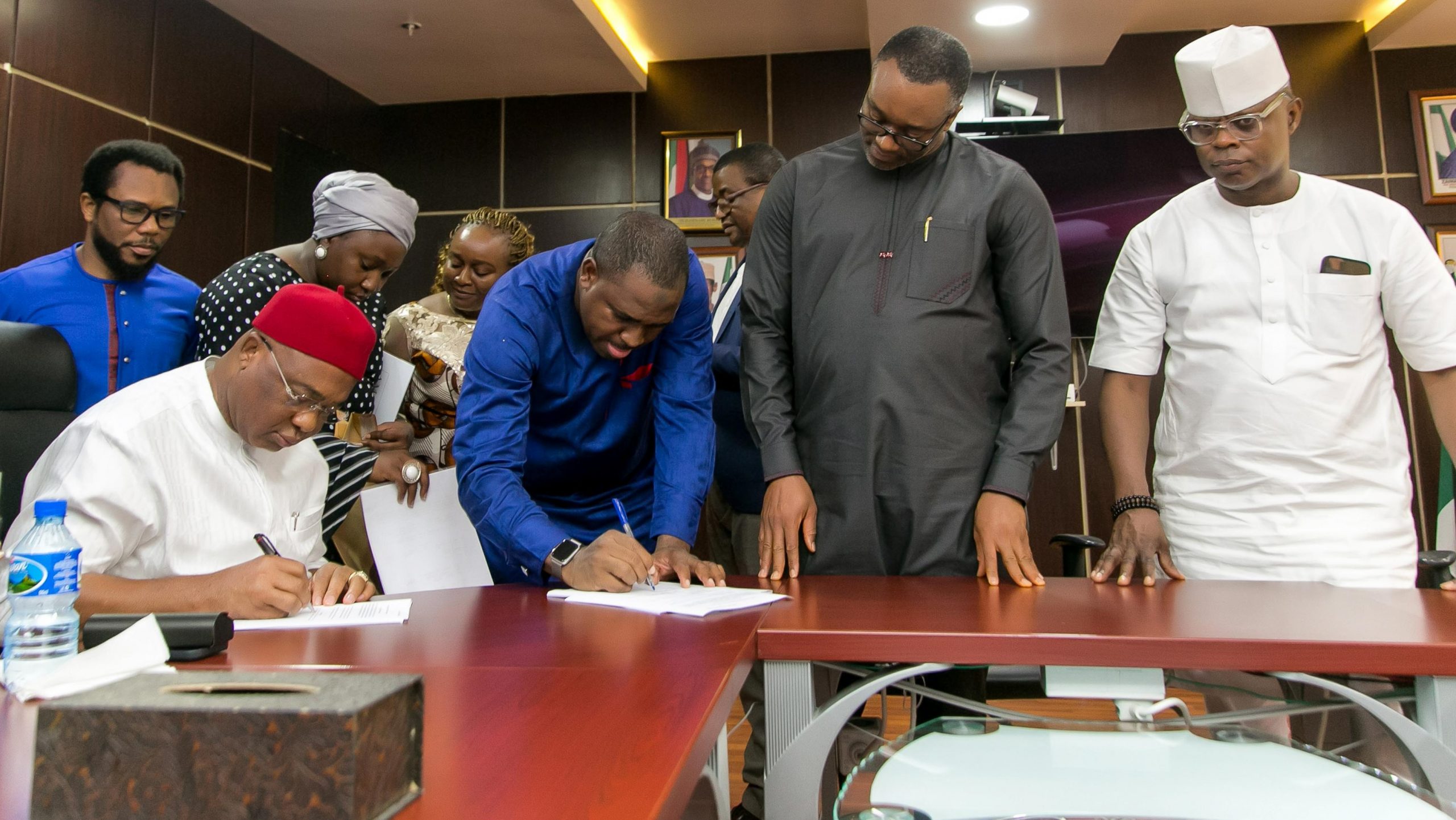 Photo Caption: Imo State Governor, Senator Hope Uzodimma, supervised by Dr. Eberechukwu Uneze, Executive Director at AMCON, and other officials of the corporation, as he signs the acknowledgement copy of the title documents…in Abuja on Friday.

As part of its strategy to partner, support, and help revitalize businesses in its portfolio over huge debt, the Asset Management Corporation of Nigeria (AMCON) in Abuja on Friday at its Abuja headquarters, handed over the original title documents of Standard Shoe Company Limited (SSCL), a footwear manufacturing factory co-founded by the Imo State Government in 1974 to Governor Hope Uzodinmma of Imo State.

The ceremony, AMCON said in a statement by Jude Nwauzor, its spokesman, followed the full resolution of the indebtedness of Standard Shoe Company Limited, after months of engagement between both parties, because of the critical impact resuscitating such a massive factory would make in the manufacturing sector of the Nigerian economy.

The statement did not however say how much the debt that resulted in the takeover during the first phase of EBA purchases from Oceanic Bank in 2011, two years after it stopped production due to lack of working capital, resulting in its inability to meet up with the loan obligations.

Speaking before handing over the documents to governor Uzodinma, Dr Eberechukwu Uneze, Executive Director in charge of Asset Management, who represented the Managing Director/Chief Executive, Ahmed Lawan Kuru, said AMCON was not only happy that the Imo State government finally resolved the indebtedness, but because the state will now assume ownership of the factory, and contribute to job creation efforts, while enhancing the internally generated revenue.

Uneze who commended the governor for making efforts to resolve the outstanding loan obligation owed AMCON by the Imo State government, added, expressed appreciation at the effort because none of his predecessors “made this much effort to resolve this debt.

“So, it is a huge impact you have made. I hope this will energize the State and encourage the good people of Imo State,” he said.

Also speaking after receiving the documents, Governor Uzodimma, while recounting the pleasant experience he had with AMCON all through the negotiation process encouraged other obligors to approach AMCON freely and willingly because the corporation is not hostile, but only interested in its recovery mandate and in the genuine growth as well as development of the country… This is what I saw during the negotiation period concerning what Imo State was owing AMCON.

“I am very happy about the cooperation we (Imo State government) received, and I assure you that we are going to revive the industry by employing our young men and women to stimulate industrialization in the State. The people will be happy to see the industry come back to life. On behalf of myself and the people of Imo, I am very grateful to AMCON,” he stressed.