Bargain-Hunting In Underpriced, Sound Stocks Ahead, Amidst Attractive Dividend Yields 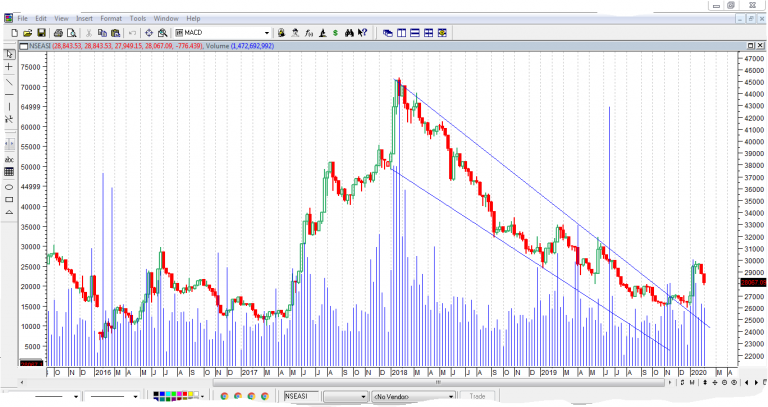 Market Update for the Week Ended February 7 and Outlook for Feb 10-14
Equity prices on the Nigerian Stock Exchange, last week slumped further, making two trading weeks of market reactions to the decision of the Central Bank of Nigeria CBN) Monetary Policy Committee MPC) to adjust the industry’s Cash Reserve Requirement for banks in the country. This was made worse by reactions to the mixed to emerging earnings reports as listed companies file their unaudited Q4 numbers without any dividend announcements yet.
This situation, coupled with the Coronavirus threats which triggered selloffs by foreign fund managers in many emerging markets in the early days of the week, further heightened concerns among investors following the recent US visa ban on Nigerians in the face of rising insecurity and the slow economic recovery. The lack of real coordination between the fiscal and monetary policy authorities in the country has not helped matters, with no complementary action to all the unconventional policy actions of the CBN to boost national productivity.
Last week, the Nigerian stock market, in four trading days, was bearish, closing just one day in green as it attempted to rebound but gave up in the aftermath of continued sell pressure. In the process, investors seemingly ignored the first audited full-year result for the financial year-end December 2019 presented by Infinity Trust Mortgage Bank during the week, along with the offer to pay 0.035 kobo (three and a half kobo) dividend to its shareholders. This corporate action ushered in the all-expected dividend announcement likely to trigger ‘buy’ interests again, as more early filers release their audited accounts in the coming weeks.
Meanwhile, despite the excess liquidity witnessed during the week owing to the maturity of investments in the CBN Open Market Operation and Treasury Bills windows, more of which would mature in this new week. This is likely to further crash money market rates, and in the process trigger profit-taking in fixed income instruments like bonds and commercial papers. This is because investors may not rollover their positions, but hold cash or look the way of the equity market for the short-term, especially now that the corporate results with dividend declaration have kicked off.
It is also important and interesting to note, when investors respond in a manner opposite to the general expectation, such subtle indications often reveal the minds of market players, because at such times perhaps, many are feeling a bit less adventurous towards taking investment risks. If such sentiment carries the day, then it might be a good time for investors to look the way of defensive stocks with strong fundamentals, which are selling below their book and fair value.
However, major stock markets of the world recorded positive outings last week, driven by a number of developments that suppressed the weak sentiments of the previous week, created by the ravaging effects of Coronavirus, the new virus from China. Top among these developments was China’s announcement of a slash in tariffs imposed on some goods from the U.S, as well as the positive labour data. The effects of these were however dampened by concerns over the economic spillover of the zero growth prediction in China in the New Year that would impact negatively on the U.S and others, due to the global interconnectivity

Movement Of NSEASI
The composite NSE All-Share Index closed for the first trading session of the week on a negative note, losing 1.08%, a trend that was sustained till midweek with the index shedding 0.35% and 1.19% respectively. The market attempted to rebound on Thursday by gaining 0.17% but gave up on Friday, losing 0.26% due to continued ‘sell’ pressure to wrap-up the week on negative sentiments.
The NSEASI, which opened the week at 28,843.53 basis points, touching an intra-week high of 28,843.53 basis points and low of 27,949.15bps on an increasing ‘sell’ pressure and profit booking in all sectors except Insurance, closed the week at 28,067.09bps, representing a 2.69% decline on a lower traded volume. Also, market capitalization fell to N14.62tr, from N15.2tr, representing a 1.61% value loss. This was lower than the rate of decline in the index, due to the effects of the additional 2.26bn ordinary shares of Abbey Mortgage listed on the NSE (READ MORE); a well as the right issue issues shares of International Breweries (READ MORE).
The week’s Advancers’ table was dominated by low cap stocks, as sell pressure hit medium and large companies as repositioning in high Dividend Yield stocks continued in the midst unaudited and mixed corporate earnings that impacted the week negatively while investors cautiously awaited the release of audited accounts and corporate actions.
Also, the prevailing negative sentiment was evident in market breadth that was down during the period, with decliners outpacing advancers in the ratio of 49:15. The momentum behind the week’s performance was strong despite sliding down marginally, as revealed by the Money Flow Index of 73.60bps, compared to the 75.46bps of the previous week.
The low volume of trade resulted from indecision among market players ahead of the release of audited 2019 full-year scorecards, even as Investdata’s Sentiment Report for the week was negative at 13% ‘buy’ volume, and 87% ‘sell’ position, on a transaction volume index of 1.19.

NSEASI Weekly Time Frame
Technically, the NSE is pulling back and this trend is likely to continue unless positive audited accounts with dividend declaration start hitting the market next week as many fund managers are holding cash in expectation of economic data like January inflation and Q4 2019 GDP reports slated for February 17 and 24 respectively. This will determine which windows they will be looking at equity or fixed income market as assets repricing persist in the financial market.
The negative sentiment behind the NSE Index price action and trading pattern for the week remained dicey despite the earnings expectations that support a reversal in trend. The index touched 27,949.15bps within the period, an indication of wake inflow into the market as institutional investors and fund managers position for the last two weeks is weak ahead of the audited earnings season.
MACD remains bullish on the weekly chart and bearish on a Daily Timeframe, with the composite NSE index sustaining a downward movement that signals a slowdown in the recent recovery as selloffs and profit-taking persist at the end of the first trading week of February.
The NSE’s benchmark index on a weekly time frame is trading above its 50-Day Moving Average, The Relative Strength Index read 50.53, indicating relative strength. However, Money Flow is reading 73.60 points and looking down on the weekly chart which is an indication that funds are leaving the market and individual stocks.

BearishSectoral Indices
All the sectorial performance indexes for the week were down, except for the NSE Insurance that closed marginally up at 0.23%, while the NSE Industrial Goods Index led the decliners, after losing 4.07%, followed by the NSE Oil/Gas, Consumer Goods and Banking indexes that were down by 3.05% 2.23% and 1.51%, respectively.
Market activities, in terms, of volume and value for the week were down by 5.13% and 22.13% respectively, as investors exchanged 1.48bn shares worth N20.3bn, as against the previous week’s 1.56bn units valued at N26.07bn. This volume was mainly driven by trades in financial services stocks, especially in Zenith Bank, FBN Holdings and Guaranty Trust Bank.
The best-performing stocks of the week were Law Union & Rock Insurance and UBN, which topped the advancers’ chart after gaining 58.57% and 17.80% respectively, closing at N1.11 and N6.95 per share on bargain hunting over the industry consolidation, and sentiments. On the flip side, C & I Leasing and Royal Exchange Assurance lost 26.53% and 16.67% respectively, closing at N5.40 and N0.25 per share on selloffs.

Market Outlook
We expect more corporate earnings release to dictate the market direction in the midst of profit-taking and repositioning by market players, as more OMO and bond investments mature, making more funds available for equity investment, despite the fact that funds managers are holding on to cash. This is just as more liquidity finds its way to high Dividend Yield stocks with sound fundamentals, which will also be based on a seemingly positive outlook for the domestic economy, despite the mixed outlook for 2020 from various analysts.
Discerning investors, nonetheless, should take advantage of the current low stocks valuation to position for medium to long-term. It is noteworthy that the market is selling at a discount and therefore offers high upside potential.
We should, however, not overlook the possibility of a bargain-hunting motive supporting positive performance, especially with many fundamentally sound stocks remaining underpriced. With a dividend yield of major blue-chips continuing to look attractive in recent weeks, we expect speculative trading to shape the market’s direction, despite the seeming mixed outlook.
Again, the current undervalued state of the market offers investors opportunities to position for the short to long-term, which is why investors should target fundamentally sound and dividend-paying stocks for possible capital appreciation in the New Year. This was noted in the 10 golden stocks and trading ideas for 2020, as discussed extensively during the Investdata 2020 Opportunities & Trade Ideas Summit.
Also, traders and investors need to change their strategies, because of the NSE’s pricing methodology, CBN directives and its impact on the economy in the nearest future.
Meanwhile, we thank all the participants of the PHC Invest 2020 Summit last weekend, as we also welcome you all to a bullish 2020. The home study packs of Invest 2020 Opportunities and Trade Ideas Summit containing the 10 Golden Stocks for 2020 are available with an average return of 13.37% in less than 30 days. To obtain your pack send ‘Yes’ or ‘Stock’ to 08028164085, 08032055467, 08111811223 now.