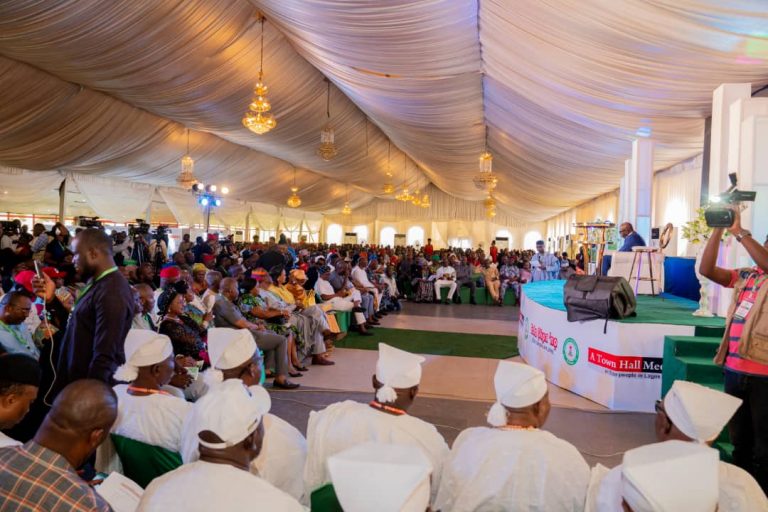 •Says Industrial Park Takes Off This Year
Governor Godwin Obaseki of Edo State, at the weekend in Lagos, assured that the ongoing Benin River Port project in Gelegele, near the state capital, Benin City, is one that will redefine the state’s economy over the next 100 years.
Addressing indigenes of the state resident in Lagos and environs at a Town Hall Meeting organized by Unuedo Renaissance, a group of professionals from across the three senatorial districts of Edo, the governor said the River Port, as well as the Industrial Park, which will take off this year, will boost the administration’s plan to boost job creation and improve the socio-economic landscape.
The Industrial Park is expected to create over 170,000 direct and indirect jobs on completion will be home to over 1000 companies and generate over $3bn annually.
Obaseki said his government is “not thinking about the next election… We are (rather) thinking of the next generation. Where will Edo be by 2050? Where will Edo be in 30 years?
“What we need to do is rigorous regional plans,” he told the gathering.
Speaking on “unveiling the future,” at the meeting with the theme: “Edo’kpa no (Edos are one), he said the government is fashioning a 2050 development plan, to envision what the state should look like over the next 30 years, based on realities of today, peculiarities of yesterday and expectations for tomorrow.
The Master plan, he assured, will involve everybody, because all his “administration is doing is about tomorrow, because tomorrow must come.”
“The Benin River Port is the goldmine. We can attract 30% of the cargo going to the Lekki Deep Seaport,” even as the construction of the Benin River Port would offer opportunities to export agricultural and manufactured products produced in the state.
During the question and answer session, the governor assured that the Edo Dry Port on Sapele Road, Benin City, in collaboration with the Nigerian Shippers’ Council, will commence operations this year.
He explained that the state is not left out in the area of manufacturing, especially as “6 million metric tons of cement per annum will be produced by Dangote Cement and BUA Cement groups from their facilities in Edo, by the end of 2021.
Importantly, he said God placed Edo State as a hub for road transport to access various parts of the country, even as efforts are ongoing to make it a rail hub also.
As part of the development efforts of the government, he said, air passenger traffic has increased by 50%, following which the present Benin Airport constructed in 1956 with a four-kilometer runway has become grossly inadequate.
“We have to build an international airport… Edo is the next Silicon Valley in Nigeria.”
Governor Obaseki also spoke of the ongoing transformation in the education system beginning with primary schools with focus now on secondary education, lamenting that “something has gone wrong with Nigeria’s secondary education. To address the challenge, he said his administration is planning an educational summit to hold soon.
“… By the time I finish in Edo State Government, we would not have to carry files again,” he assured, adding that as part of the Ease of Doing Business efforts by the government, anybody can get Certificate of Occupancy within 90 days of applying for one for N100,000.
For Obaseki, “by 2050, my dream is that Edo will host the Olympic Games.”
At the town hall meeting, representatives from the three senatorial districts made presentations, beginning with Dr. Mahmoud Dako, who called for the declaration of a state of emergency in the health sector of Edo north. Also importantly, he urged the government to address the challenges of staffing and equipping of secondary schools, just as he sued for peace in the polity.
For Matthew Egbadon, former Speaker of the State’s House of Assembly, who spoke for the Esan Community of Edo Central Senatorial District in Lagos, the state government should provide potable water in the area.
While appreciating the laudable development projects being executed by the government across the state, he lamented the marginalization of Esan people politically, especially in the area of state and federal government appointments that have been appropriately exclusively by the two other zones.
For this reason, he stressed, “Esan people are worried… Edo is standing on bi-polar, rather than a tripod,” as originally designed, drawing applause from the excited crowd as an affirmation that he indeed spoke their minds on the issue.
He also lamented the spate of insecurity in the state with miscreants taking over, thereby making the state unattractive to investors, urging the governor to look into areas of comparative advantage of the zone, especially the backward integration in cassava envisioned by a previous administration.
Bright Ogbebor, who spoke on behalf of Edo South, applauded the governor for the good work, following which he should be allowed to complete for the development of the entire state.

Photo caption: A cross-section of participants at the town hall meeting of Edo People in Lagos organised by Unuedo Renaissance on Saturday, January 19, 2020.