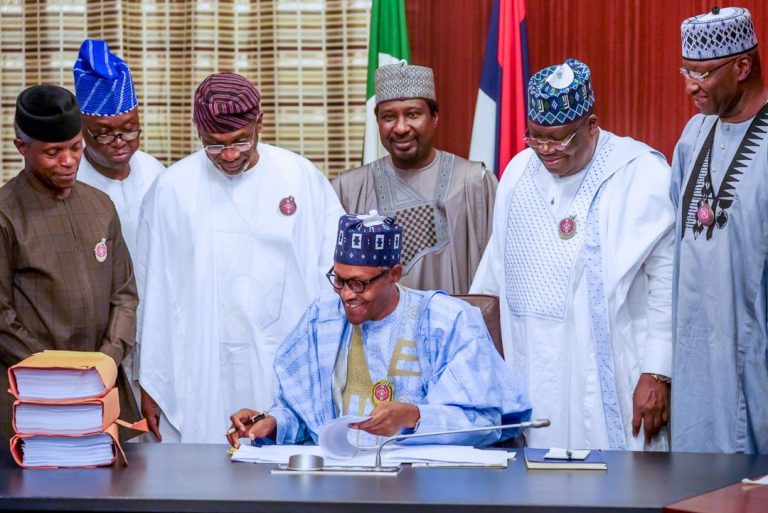 Like a dream come true, Nigeria achieved the National Assembly’s plan for a January-December budget cycle, with President Muhammadu Buhari signing the 2020 Appropriation Bill passed into law for the first time since the return of the country to democracy in 1999.

Senate President Ahmed Lawan first mooted the idea of returning the nation to the January-December cycle soon after he was elected on July 31, 2019.

Although a budget of N10.33tr was laid before a joint session of the National Assembly on October, N10.59tr was signed into law on Tuesday by President Buhari.

This was however lower than the N10.729tr recommended by the Senate during the October 3, 2019 passage of Nigeria’s 2020-2022 Medium Term Expenditure Framework and Fiscal Strategy Paper (MTEF/FSP).

The budget, however, seems to have ignored criticisms that the spending plan represents an attempt by the federal government to build castles in the air, in the words of analysts at the investment banking group- Afrinvest. The fear, they argued, is based on the fact that the government has ignored lessons from the recent dire straits of its budget performance, particularly in the area of the underperforming actual revenue projections at 44.7% and 47.8% in 2018 and 2017 respectively.

Those at Cordros Securities Research see the budget as ambitious, even as it may not be realistic after all, wondering how the government plans to pool NGN2.6tr, representing 32.4% of the total revenue, projecting a crude oil price of US$57 per barrel and production of 2.18m barrels per day. This, it noted, is against the backdrop of “weaker global economic growth expectations, amidst heightened trade tensions, (following which) the supply and demand dynamics of crude oil are currently at disequilibrium, with supply running faster than demand, which has caused prices to trend lower.”