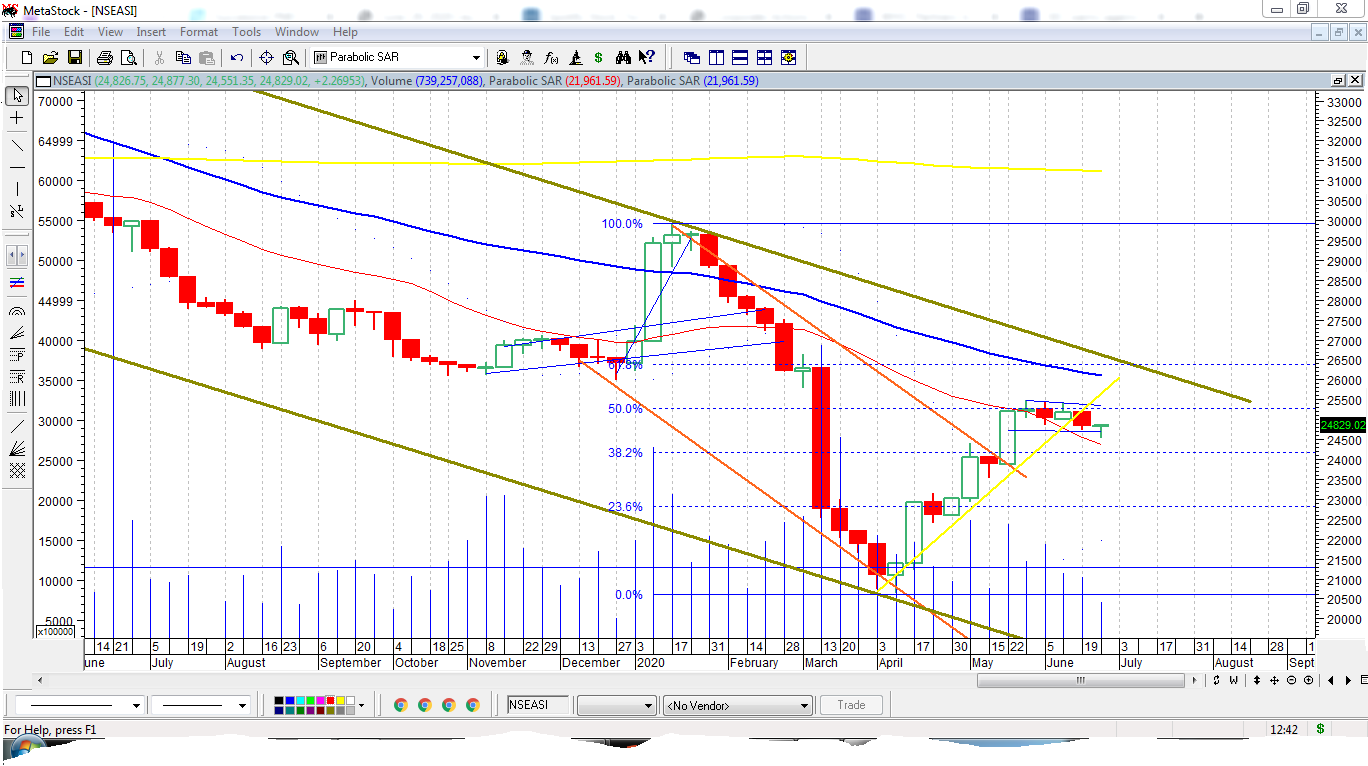 Post Views: 208 Market Update For Week Ended June 26, & Outlook for June 29—July 3 It was another week of distribution and volatility on the Niger...

It was another week of distribution and volatility on the Nigerian Stock Exchange (NSE), with the All-Share Index closing marginally higher. This followed last-minute ‘buy’ interests in high priced stocks like Airtel Africa and Nestle Nigeria, as investors and traders positioned ahead of their dividend qualification date, and Annual General Meeting respectively on Friday. The situation halted the bearish mood of the market on a seemingly improved buying sentiment.

It was also a week of disappointing news, including the release of troubling economic data with the World Bank projecting that Nigeria’s economy will contract by as much as 5.4% in 2020. The nation continued to record a significant increase in the number of novel Coronavirus (COVID-19) pandemic cases, occasioned by the nation’s increased testing capacity. The Federal Government, also during the week, announced the approval of N2.3tr economic stimulus package, that complement the Central Bank of Nigeria’s efforts at reducing the impact of the global economic crisis.

The shaky macroeconomic indices are indicating that all is not well with the domestic economy in the face of ravaging pandemic, which has exposed Nigeria’s economic vulnerability pushing it into what has been described as the worst recession in all of 40 years, expected to be confirmed by the Q2 GDP data. Already, key data like the manufacturing sector’s Purchasing Managers Index (PMI) released by the CBN showed a further decline in the month of June to 41.1 points, down from 42.1 and 51.1 points in May and March 2020 respectively. This reflects the sustained contraction and rising level of unemployment, with many experts calling for a total overhaul of Nigeria’s socio-political and even economic superstructure.

Ahead of Q2 earnings reports, funds are still leaving the nation’s equity market for safer investments window, and from one sector to sector as investors aligned their portfolios towards companies expected to benefit from the ongoing pandemic. These are companies whose earnings are expected to beat market expectations for the good of investors.

As we have always noted, in any market situation there are opportunities, especially with the earnings season around the corner to change the market momentum and action. You don’t have to be smart before you can make money in the stock market because the way it moves is always changing. As such, what you need is to think differently and educate yourself, using home study packsand videos, especially mastering the earnings season for profitable trading andinvesting in any market situation/cycle. That means we do not equate an “up” market with a “good” market and vice–versa. Markets present different opportunities to make money at differenttimes.

The global stock market, in the period under review, was mixed amidst investor concerns about tariffs and trade relations, the oscillating oil prices and the COVID-19 resurgence, which are among factors propelling fears around the globe, even as governments of various countries are going into deep debt to curtail the crisis.

As a result of the week’s bear dominance, there were four straight trading sessions of down markets, beginning on Monday when the composite ASI closed 0.29% down on extended profit taking from the previous week. The trend was sustained until Thursday when it shed 0.02%, 0.38% 0.12% respectively bowing to selloffs. There was respite on Friday with the 0.84% rebound which was enough to close the week slightly up.

This brought the week’s cumulative gain to 0.01% against the previous week lost position of 1.41%, to remain in the correction mood.

Consequently, the benchmark index NSEASI crawled 2.27 basis points up, after opening at 24,826.75bps, touching an intra-week high of 24,877.30bps, from its low of 24,551.35bps on profit booking and selloffs. With the market at its distribution phrase, it seriously calls for cautious trading and the need to hold cash, because a selloff is underway ahead of the Q2 corporate earnings. This is because most companies are likely to post disappointing numbers in the absence of positive economic fundamental or information capable of triggering positive sentiments at the moment. Friday’s gain reduced the losing momentum as the market closed above its opening level at 24,829.02ps, compared to previous week’s close, and below the 25,000 mark.

Similarly, market capitalization gained N1.16bn during the week, closing at N12.95tr, from the previous weekend’s N12.95tr, representing a 0.01% flat position in investors’ portfolio, after the share prices of Prestige Assurance, Dangote Sugar and GSK were adjusted for script and cash dividends of two for 11 bonus shares, N1.10 and 0.55 kobo respectively.

The top advancers log for the week were mixed, despite the fact that decliners were more in the ratio of 43:18, while energy behind the week’s performance was relatively strong, as the Money Flow Index read 58.77bps, compared to 53.18bps in the previous week, despite the selloffs.

The NSE’s index action has side trended into the distribution stage on a daily time frame. The weekly range, as revealed by the chart above supports pullbacks, considering the decline in daily traded volume which peaked at 581.61m shares on May 27, 2020, which is a strong sign of weakness, despite the weekly bullish MACD which has crossed over the signal line. The index traded slightly above the 20-Day Moving Average, within the long bearish channel, just as buy volume stood at 85%, and the money flow index up at 58.77 points.

On a weekly time frame, Relative Strength Index has remained flat to side trend, reading 47.76 just as momentum behind the market’s recovery has started to regain strength. This despite the continued profit taking ahead of Q2 economic and earnings data, as portfolio repositioning continues at a time of global economic reset and fear of coming global recession.

The strength behind the NSE’s index movement on a daily and weekly chart have been weakened with the ADX reads 20.48 points from last week 21.78points, on positive sentiments as revealed by Investdata’s Sentiment Report for the week, showing 85% ‘buy’ volume and sell position of 15% with the transaction volume index at 0.49.

All the sectoral performance indexes were down except for the NSE Consumer Goods index that closed flat, while the NSE Oil/Gas led the decliners after losing 4.84%, followed by the NSE Industrial Goods and Insurance that closed 2.03% and 1.57% south respectively.  Last week also, the NSE Banking index dropped by 0.52%.

The week’s transaction in terms of volume and value were down by 29.52% and 15.5% respectively, as investors traded 739.38m shares worth N8.56bn, down from the previous week 1.05bn units valued at N10.13bn. The week’s volume was boosted by trades in financial services, consumer goods and oil/gas stocks, especially FBN Holdings, Guaranty Trust Bank, Nestle and Seplat.

After a long time, Airtel Africa featured on the Advancers’ table along with ABC Transport as best performing stocks for the period, gaining 9.92% and 9.80% respectively, closing at N328.70 and N0.56 per unit on positive market sentiment ahead of dividend qualification dates. On the flip side, PZ Cussons and GSK lost 21.43% and 17.61% respectively, closing at N3.85and N5.85 per share on selloffs and price adjustments for cash dividend of 55kobo.

The benchmark index’s candlestick formation supports reversal but looks somewhat as the expectedly Q2 earnings decline are being factored into the ongoing asset revaluation by fund managers and individual investors after three weeks sideways trend to enter distribution and  correction as profit taking gains momentum.

We cannot also rule out investors pricing in the recently wobbling economic data from May Inflation rate of 12.4%  and PMI of 41.1 points which thrown returns on most investment classes into a negative with yields below the level which showed that inflation has risen close to  the Central Bank of Nigeria’s benchmark Monetary Policy Rate (MPR) at 12.5%.  Declining industrial productivity that points to recession.

The sectoral rotational wave will help investors to cash in on low cap stocks and sectors that have suffered huge losses before now. Already investors are looking the way of healthcare, Airline services providers, among sectors likely to be impacted positively in the much anticipated global and domestic economic reset.

Also, the possibility of continued funds inflow to the low priced stocks is high, due to the higher yields and upside potentials, considering the low rates on offer in the money and bond markets. In the meantime, investors should also look out for developments around the implementation of the CBN’s funding plan for small and medium scale businesses.

Already, we notice that investors are taking position in healthcare and other defensive stocks likely to survive this meltdown, as seen in the increased trading in them, even as the global markets continue on the recovery path, with the gradual easing of the lockdown.

While discerning investors should prepare to take advantage of stocks revaluation to position for the medium to long-term, it is noteworthy that the Nigerian equity market is selling at a discount and therefore offers high upside potential.

Expect a pullback that will support the upside potential, especially with many fundamentally sound stocks remaining underpriced, and the dividend yield of major blue-chips continuing to look attractive in recent weeks, we expect speculative trading to shape the market’s direction, despite the seeming mixed outlook.

To position for the short to long-term, investors should target fundamentally sound, dividend-paying stocks, for possible capital appreciation in the coming months. Also, traders and investors need to change their strategies, because of the NSE’s pricing methodology, the CBN directives, and their impact on the economy in the nearest future.

Meanwhile, the home study packs, videos on strategies and how to invest profitably in this changing market dynamics and recession.  Mastering Earnings Season for Profitable Trading and Investing in any market situation/Cycle are available. To obtain your pack send ‘Yes’ or ‘Stock’ to 08028164085, 08032055467, 08111811223 now.