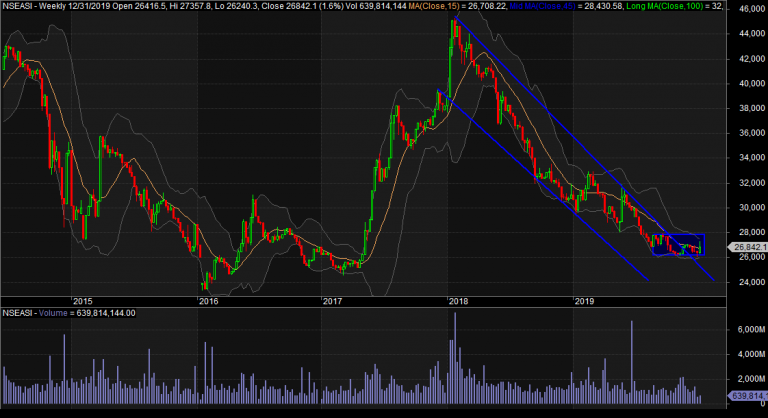 It was a mixed performance at the end of trading on the Nigerian Stock Exchange in 2019 in the midst of political activities, being an election year characterized by high levels of uncertainties, insecurity, and introduction of new economic and regulatory policies that propelled mixed sentiments. These, in turn, extended the bearish nature seen in 2018, following which the market again closed the year in negative territory, making 2019 one of the six worst years of the decade, after the benchmark NSE All-Share Index lost 14.60%, which was, however an improvement considering the 2018 decline of 17.81%. Recall that the NSE shed 17.36% in 2015; 16.31% in 2011; 16.14% in 2011; with the lowest negative position in the past decade being the 6.17% loss it suffered in 2016, a post-election year.

The mixed sentiments and buying interest that prevailed in the year under review resulted from risks associated with the 2019 general elections that were the major focus in the first quarter of that year, as governance was consigned to the back seat, following which the NSE index, in reaction, oscillated within the period.  The political environment after the incumbent President was declared the winner of the presidential election and the inauguration period weighed investor confidence and subsequently on stock prices due to the lack of direction. Recall too, that the 2019 budget was only signed into law on May 28, a day to the commencement of the second four-year term.

But the listing of telecommunication giants- MTN Nigeria in the second quarter, as well as others like Airtel Africa, Sahco, in addition to the Access Bank-Diamond Bank merger rescued the market from being worse than 2018. Last year’s decline was despite the increased number of delisted companies. They are: Great Nigeria Insurance, Diamond Bank, Newrest ASL, First Aluminum, Skye Bank, Fortis Microfinance and Dangote Flour, when compared to 7UP, African Paints, Afrik Pharm, Paints &

Coatings Manufacturing were delisted in 2018.

The unconventional monetary policy initiatives of the Central Bank of Nigeria, however, helped to stimulate economic activities, as seen in the Q3 GDP growth of 2.38%, despite the fact that the government was busy with interests jostling for political appointments, a situation that prevailed throughout the period. There were other regulatory initiatives from the NSE, Securities and Exchange Commission, National Insurance Commission. We acknowledge some fiscal measures in the final months of the year, particularly the early passage and assent to the 2020 budget, thereby returning the nation to the January-December budget cycle. Early disbursement of funds and implementation of the various initiatives captured in the budget, will expectedly kick off early this year, a situation that will have multiplier effects on the economy.

Added to this is the expected effect of the CBN directive that banks in the country should increase their Loan-Deposit Ratio. In the past year, the LDR of Nigerian banks was jerked up first from a mere 17% to 60% in September, then 65% on December 31. This, it is believed, has increased lending to the real sector of the economy by almost N4tr to drive productivity and growth in the economy in the period under review.

The prevailing low-interest rate regime in the money market due to the April 2019 cut in Monetary Policy Rate to 13.5% after staying unchanged at 14% for more two years, the LDR and restriction of corporate bodies and high net worth individuals from participating in the CBN’s Open Market Operation investment window further made more funds available in the financial markets, crashing money market rates, leading to declining yields in fixed income market.

These, coupled with the border closure have boosted activities in the nation’s manufacturing sector over the last five months, as shown in the CBN’s Purchasing Manager Index for the month of December at a high of 60.2point. This is likely to support economic activities and corporate earnings, especially manufacturing companies after their share prices suffered huge declines in 2019. The regulatory initiatives of the NSE regarding the new pricing methodology and NAICOM’s insurance industry recapitalisation in the last quarter of 2019 changed the trading pattern and supported the resistance of decline in the final two months of 2019. This was coupled with the impact of the capital wave and the historic year-end window dressing rally which closed positive and flat in November and December respectively.

The year’s trading started on a negative note in January, which was characterized by strong selling pressure and profit-taking from December’s upmarket in 2018, ahead of February’s general election. However, there was a reversal in trend in the heat of the election’s uncertainties following the plethora of electoral campaign promises and projections by foreign agencies, which triggered positioning in stocks a few weeks to the general polls. This impacted positively on the NSE index for the second month of the year, but as soon as the election results went against the popular expectations, investors sold down their holdings, even in the peak of earnings reporting season for the 2018 full-year and 2019Q1 results.  There was another reversal in May induced by the listing of MTN Nigeria, after the market had closed negative in June, July, and August, after which the NSE Index action resisted a further decline in September. It oscillated for the rest of the year, closing positive in November on the strength of regulatory policies and low valuation.

The NSE Index action as seen in the opening chart, revealed a breakout of a two-year bearish channel, resisting further decline despite the recent oscillation in the last few trading weeks of 2019.

The nation’s prolonged down market and mixed macroeconomic indicators during the year under review have made the NSE rank among the worst-performing exchanges in the world and Africa, as investors record huge losses on the average during the year.  The change in market sentiments offered insights into the 2019 downturn, which supported the mild and mixed quarterly earnings reports and mild improvements in macroeconomic indices. It, therefore, kept many investors and traders on the sidelines as reflected in the year’s Investdata sentiment report showing a sell-volume of 88% and 12% buy position, as against 2018 buy sentiment of 6% and sell position of 94%.

The other leg of the market which is the primary market recorded improved activity, compared with the previous years as more companies became listed, just as the market witnessed a torrent of rights Issues and Initial Public Offerings, despite the low investor confidence in the economy and market.

The market’s sectoral indices performance was bearish, with all 10 closings the year lower, led by the NSE Consumers Goods and Main Board indexes which lost 20.83% and 20% respectively to top the chart. 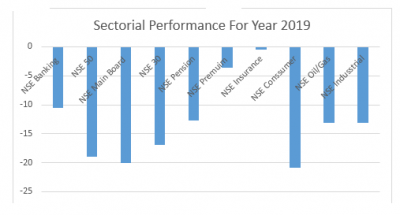 The significant decline in theNSE ConsumerGoods and the main board indices reflected the weak purchasing power of Nigerians, low economic activities and consumption, just as the labour market remained weak with the high unemployment rate and poor wages. We expect the N30,000 new minimum wage to address, just as the low-interest rate regime will boost consumption going forward, despite the rising inflation rate. Corporate earnings from these sectors were below market expectations within the period under consideration. This is also likely to turn around in the future.

Available data shows that market liquidity was low due to cautious trading by local institutional and foreign players, a situation that also revealed how much Nigeria’s stock market and economy depend on foreign funds. This, in turn, tends to dictate economic prosperity and wealth creation, especially when they moved in and out of the market at the slightest hint of trouble.

Knowing the danger of foreign investor dominance in any stock market, local investors and traders should plan their trades for 2020 in case they return before or after seeing the impact of recent regulatory initiatives and expected economic reforms expected to boost economic performance in the New Year.

It has been a year of downtrend narrative, mixed sentiments and economic performance as the best year of the decade was 2013, when the index gained 47.19%. Listed below are the top gainers in terms of price appreciation despite the bearish experienced in 2019.

A total of 26 stocks closed higher, with 13 of them growing their share prices by 20% and above, compared to 25 equities that advanced closed higher in 2018, 16 of which recorded double-digit price appreciation.

A further breakdown showed that the services sectors and kobo stocks dominated the top performance table for the year, a situation that may likely continue in the New Year with dividend stocks and others that had suffered losses within the period, rebounding on low attraction ahead of the 2019 full-year earnings season in Q1 2020 and the effects of an early implementation of the 2020 budget that is running concurrently with 2019. There are also the expected improvements in economic fundamentals. 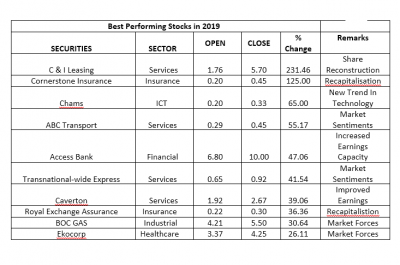 On the flip side, over 73 stocks closed the year south, mostly blue-chip stocks amidst the weak economic fundamentals and the strength of their unimpressive numbers, as they failed to live up to the hype that briefly surrounded them. They suffered significant losses over the past 12 months, especially the brewery companies. Others were due to mixed earnings, negative sentiments and general bearish trend in the market, due to the cocktail of factors earlier mentioned. 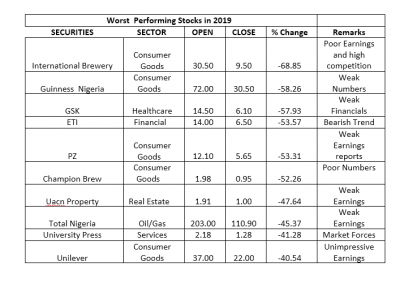