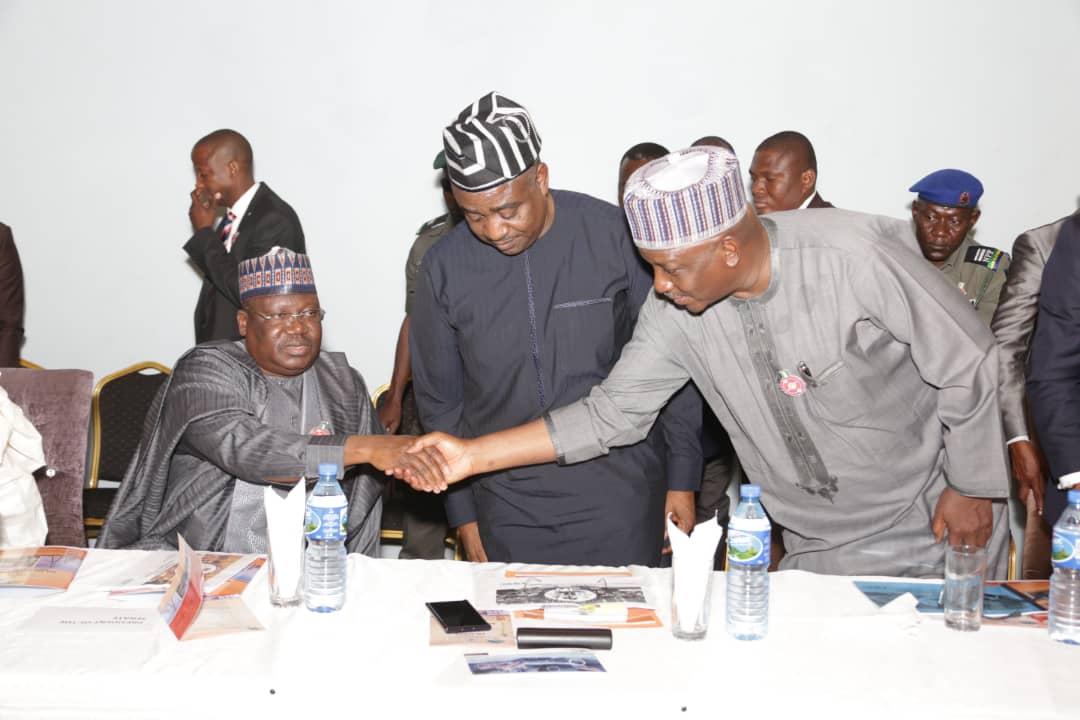 Post Views: 584 President of the Senate, Ahmad Lawan on Monday said the only way to overcome the legion of problems stalling steady power supply in Ni...

President of the Senate, Ahmad Lawan on Monday said the only way to overcome the legion of problems stalling steady power supply in Nigeria is for the Federal Government to urgently declare a state of emergency in the sector.

Declaring open a one-day round-table discussion with the theme: “Addressing Nigeria’s Power Problems” organized by the Senate Committee on Power, he said the 2005 and 2013 privatization of the power sector was a grand scheme to defraud Nigeria.

The Federal Government was represented at the round-table organized by the Senate Committee on Power were the Minister of Power, Saleh Mamman and Managing Director, Nigeria Bulk Electricity Trading PLC, Marilyn Amobi.

A statement by Ezrel Tabiowo, Special Assistant (Press), to President of the Senate

Quoted Lawan as lamenting that “if there’s any sector of our economy that is so important and yet so challenged, it is the power sector. I believe that this is a sector that needs a declaration of emergency.

“This is an opportunity for us in this round-table to exhaustively discuss not only the problems of the power sector in Nigeria but the solutions and way forward.

“The truth is that we all know what is wrong. What we really need to do is to have the political will to take on the challenges generally.

“From the electricity power reform of 2005 to the privatization of Gencos and Discos and to what is happening today, we know that everything is a fraud. If we play the ostrich, in the next ten years we will be talking about the same things.

“I think the time has come for us to have courage. I want to remind us, that we have signed the African Continental Free Trade Agreement. What will give us an edge is to have a competitive environment.

“Our industries and businesses must be able to produce things that can compete favourably with products produced in other countries in Africa. We are not in that position today, and we all know the consequences of that.

“Even our citizens, who have capital, will rather relocate to Ghana, produce whatever they want and bring to Nigeria to sell. Where does that leave our country? No employment opportunities; Nigeria becomes a dumping ground.”

The Senate President, therefore, called for a review of the privatization exercise undertaken by the Goodluck Jonathan administration which led to a takeover of the power sector by private Generating Companies (Gencos) and Distribution Companies (Discos).

He added that the National Assembly would make a significant contribution to the reform of the power sector through enabling legislation required to turn around the fortunes of power generation and distribution in Nigeria.

“If we went wrong with our privatization of Gencos and Discos, the time has come to look into it.

“Whatever we have to do to review these things, we should do. We must do it in the interest of the people of this country. We must admit there was something done wrong.

“This round-table actually is an idea of the Senate, that we should come together to talk among ourselves. Ours is to provide legislative interventions, but we are also part of the government.

“Therefore, whatever that is required to support the executive arm of government to turn-around this sector, in fact we are more than prepared to do so through legislation.

“If we are going to amend the power sector reform, we are prepared to do that, and expeditiously. Tell us where the issues are, because we can’t afford to delay any action to make the power sector of this country perform.

“In the sixties we were comparing ourselves with Indonesia, Malaysia and the rest, now we started comparing with Ghana, Togo. With all due respect, that tells us we are not making progress where other countries are.”

“This round-table is an opportunity to come up with measurable roadmaps because we are not going to leave the implementation to the executive alone. We want to participate in every inch of the way.

“Every bit of what is to be done; we want to be part of it, so that we can contribute meaningfully to take the power sector to the next level.

“It is really disheartening that we are still talking about 4,000 megawatts. I don’t understand this. Other countries within Africa are talking of so much, even Ghana is three times better than what we are doing.”

Lawan called on the federal government to deploy the political will towards revamping Nigeria’s failing power sector, saying, “We are yet the largest economy in Africa, for how long can we sustain that position?

“I believe that we have to declare a state of emergency on Power, and courageous decisions must be taken by the government”, the Senate President said.

Earlier, the Senate Leader, Yahaya Abdullahi, in his welcome address said the “interaction was arranged out of the concern of the Senate and National Assembly about the intractable problems that we have been facing in the power sector.”

According to Abdullahi, “a lot of resources and human effort have gone into finding solutions to problems that have put this country several decades backward, particularly because of the issues that have been raised and have undermined the development of power.”

Chairman of the Senate Committee on Power, Senator Gabriel Suswam, said, “There’s no doubting the consequential role which electricity plays in the economic development of countries.

The lawmaker lamented that Nigeria currently holds the position of being the second country in the world after India, with the highest population in the world without access to electricity.

Suswam identified challenges in the power sector to include: institutional and governance; infrastructural; political; legislative and environmental.

“Most institutions of government saddled with the responsibility of managing the power sector lack the capability and capacity to function effectively”, he said.

The lawmaker added that there is a serious infrastructural deficit in the entire value chain of the power sector, adding that “this more than any other challenge requires attention.”