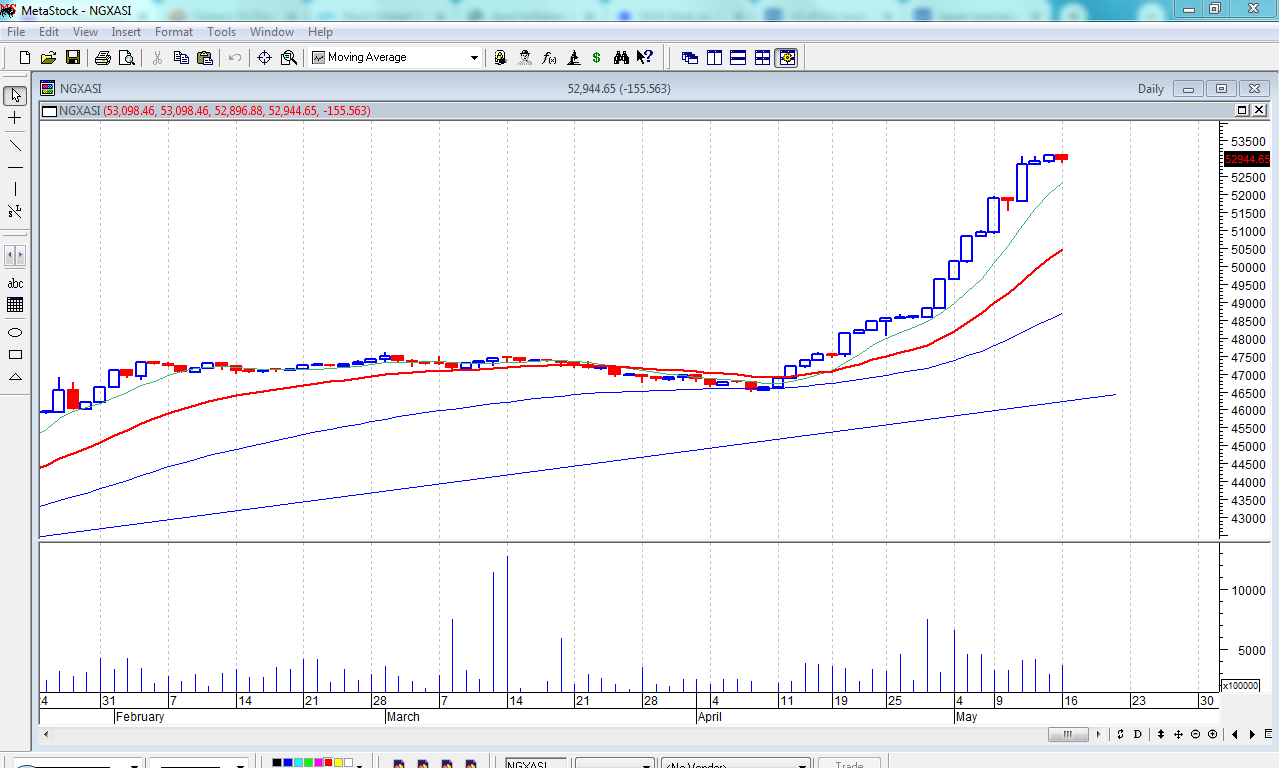 Market Update for May 16

Trading activities on the Nigerian Exchange opened the week on a negative note, thereby halting three consecutive sessions of bull transition while slowing down the galloping market that had formed a triple top chart pattern. This followed profit taking in some blue chip stocks that pulled back the composite NGX All Share Index marginally on a less than average traded volume, in the midst of impressive corporate earnings and rising inflation.

The decline coincided with the release of the nation’s Consumer Price Index by the National Bureau of Statistics (NBS), to the effect that inflation for the month of April hit an eight-month high at 16.82% month-on-month (MOM) from 15.92% in March 2022, indicating a rise of 0.9%. Year on Year (YOY), however, it decreased by 1.3%, lower than the rate recorded in April 2021 (18.12%), showing a slow and reduced pace in April, when compared to the same month the previous year.

Core inflation recorded 14.18% in April 2022, rising by 1.44% compared to 12.74% in April 2021. The core sub-index advanced by 1.22% (MOM), lower by 0.24% when compared with 0.98% recorded in March. The highest increases were recorded in prices of Gas, fuels, clothing, accessories, and so on. This huge spike in numbers most especially in the prices of food items and other consumables, can be associated with the soaring oil prices owing to the global crisis, which greatly compounded consumer spending, as well as prices of goods and services.

Despite the profit-booking by traders at Monday’s session, there was a positive market breadth attributed to investors search for stocks with good fundamentals and positive returns that are above inflation rate. Also, notable is the fact that players are keenly observing what is happening on the nation’s economic front, in the face of another slight decline in Central Bank of Nigeria (CBN) Treasury Bills’ primary market auction rates, especially the long-tenored 364 days.

With inflation hitting 16.82% as revealed by NBS report released on Monday, fixed income market players are likely to position more in high dividend-yield stocks as a hedge at a time the real rate of return has become negative. Stakeholders are, however, anxiously awaiting the plans by the CBN to intervene in the petrol and gas products sector, which as announced was targeted at making premium motor spirit and diesel available, thereby easing the pain of manufacturers, SMEs, and households across the country, in the face of the epileptic power supply.  We note also, and await the implementation of the directive by the National Assembly that the Nigerian National Petroleum Company provides aviation fuel for local airline operators, while another MPC meeting is around the corner, but nothing has happened to the CBN plans.

As stated earlier, selling sentiment has short-lived the uptrend, despite the move in some stocks as selloffs were witnessed across the major sectors except for energy, in the face of mixed volume patterns and earnings power. Tentatively, the continued mixed direction of the fixed income market yields and TB rates may continue supporting the flow of funds into the stock market, amidst the ongoing war in Ukraine that has influenced the global markets in recent times.

Oil prices rebounded to trade above $112 per barrel at the international market, on the news that Shanghai has signaled an end of the lockdown imposed due to the impact of the ravaging Coronavirus pandemic in the midst of the EU’s embargo on the importation of Russian oil and slight increase in production output by OPEC. The high prices of crude oil and diesel are pushing production and living costs up, heightening inflationary pressures across the globe on a weak economic outlook, thereby influencing monetary policies of central banks as they move to checkmate the impacts of the Russia-Ukraine conflict on the global economy to avoid a global recession. The nation soaring inflation is a potent threat to the fixed income market and investment yields, which should be an indication that more funds may likely flow into the equity space as institutional investors balance their portfolios.

However, we warn that market corrections are underway as a result of profit-taking, hence the need to rely on your stop-loss effectively at this point of distribution phase signals continuation, especially when the high cap stocks that control 70% of market capitalisation move down ahead of reactions to their earnings and expected dividend payments in May and June 2022.  Also, MPC meeting outcome next week.

The NGX index’s action pulled back slightly to remain in the distribution phase, trading above the ‘T-Line’ and 20-day moving average. The market is still strong ahead of any pullback since the strong support level is 51,805.41bps region, while volatility persists and uptrends towards the next breakdown sported around 52,917.76bps. Should the index break this point, the next visible support is 52,843.48bps.

Technically, the NGX index resisted further decline on impressive earnings and strong demand for stocks. The possibility of the market sustaining this trend is high as a function of stronger corporate earnings and improved economic conditions during this season, following which we advise investors to play defensive stocks to reduce investment risks around the market.

Meanwhile, Monday’s trading opened slightly on the downside and was sustained for the rest of the session, despite oscillating on profit-taking and buying interests in low priced stocks, a situation that pushed the NGX’s index to an intraday low of 52,896.88bps from its highs of 53,098.46ps, before closing below its opening points at 52.944.09 bps.

Market technicals were mixed and weak as volume traded was higher than the previous day’s in the midst of breadth favoring the bulls on a selling sentiment as revealed by Investdata’s Sentiments Report showing 24% ‘buy’ volume and 76% sell position. Total transaction volume index stood at 1.09 points, just as momentum behind the day’s performance was strong with Money Flow Index looking down at 89.35pts, from the previous day’s 95.94pts, indicating that funds left the market.

Monday’s downturn was driven by profit-taking and selloffs in MTNN, Lafarge Africa, GSK, Champion Breweries, Flour Mills, Zenith Bank, International Breweries and Fidelity Bank, among others. This impacted negatively on Year-To-Date gain, slashing it to 23.94%. Market capitalization growth stood at N6.73tr YTD, representing a 27.46% rise over the opening level for the year.

Performance indexes across sectors were in red, except for NGX Insurance and Energy index which closed 2.41% and 0.60% higher respectively, while NGX Industrial Goods led the decliners after losing 0.64%, followed by Consumer Goods and Banking with 0.62% and 0.24% respectively.

Market breadth remained positive, as gainers outnumbered losers in the ratio of 26:20; just as activities in volume and value terms were up, as investors exchanged 374.18m shares worth N4.96bn. Volume was driven by trades in Transcorp,  Jaiz Bank, Accesscorp, International Breweries, and Ikeja Hotel.

NNFM and Transcorp were the best-performing stocks of the session, gaining 9.55% and 8.53%, closing at N10.90 and N1.40per share respectively on the expected Q4 earnings report and impressive Q1 numbers respectively. On the flip side, Champion Breweries and Glaxsmith lost 9.84% and 9.49% respectively, closing at N3.94 and N7.15 per share, on profit-taking.

We expect the bulls to return an increasing position-taking ahead of Presco’s full-year result expected to hit the market on Tuesday, and portfolio rotations as market players digest the macro-economic data and  Q1 corporate earnings released, ahead of March year-end 2022 audited financials with dividend announcements to support uptrend in the new month amid the rebound in oil prices. Also, the market continues to interpret the rising inflation in relation to the crude oil price and other factors, in the midst of profit-taking and portfolio rebalancing. This will result in market players targeting fundamentally sound and dividend-paying stocks in the hope of dividend announcements.