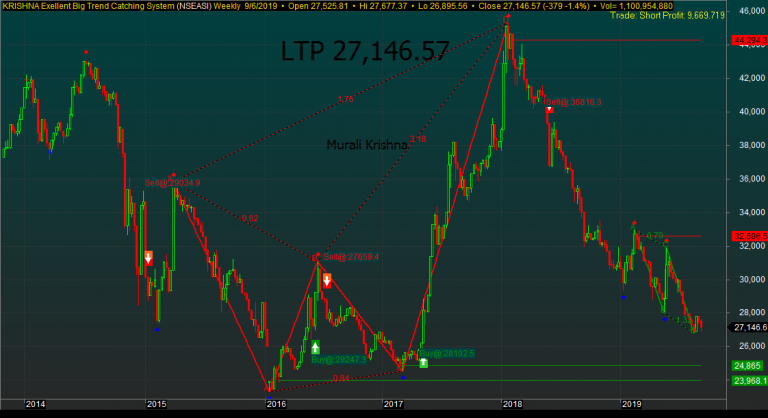 Market Update for the Week ended September 6 and Outlook For 9-13
The heightened volatility and mixed trading last Friday accompanied by selling pressure on highly capitalized stocks continued after the nation’s 2019Q2 GDP data came below market and analysts expectations with slower growth of 1.94% down from the Q1 position of 2.10%.
These points and other narratives that have not changed, but signal further potential weaknesses in the economy, despite the seemingly positive and mixed macroeconomic indices emanating from the National Bureau of Statistics (NBS) and Central Bank of Nigeria (CBN). They have been blamed for the continued selloffs in the absence of a sign of change in the Federal Government operating model and style, which is visible in the lack of urgency required by the economy on the part of the newly constituted cabinet. If this was not the case, the Federal Executive Council should by now have been rolling out policies or plans that would give the all-expected direction and stimulate the economy again after so many months of lull.
The week’s sharp decline was driven, in large part, by investors’ reaction to the attack on foreign investments as Nigerians retaliated the xenophobic attacks in South Africa back home, a situation that was not helped by the unguarded statement by Adams Oshiomhole, national chairman of the Nigeria’s ruling All Progressives Congress (APC). This situation was made worse by other concerns which weighed down the market, forcing a pullback that broke down the 27,000 psychological line again, as it tested 26,895.56 basis points. It then retraced up slightly to close the period under review at 27,146.57bps, as Guinness Nigeria, University Press, Dangote Cement, and Forte Oil hit their new 52 weeks lows on selloffs.
Movement Of NSEASI
Meanwhile, trading for last week started on a positive note as the composite Nigerian Stock Exchange (NSE) All-Share index inched 0.14% up on Monday, with investors extending previous day’s buying interests. This was sustained on Tuesday when the benchmark NSE index crawled 0.08% up on mixed sentiments. Midweek’s trading witnessed a pullback as investors reacted to the slow growth of Nigeria’s GDP in the second quarter, as selloffs hit high cap stocks. The trend continued on Thursday and Friday when the NSEASI shed 0.10% and 0.36% respectively as negative sentiments hit blue-chip stocks like MTNN, and Forte Oil, as well as others like Wema Bank and Transcorp. This pushed the week’s cumulative loss to 1.38%, which was much than the previous week’s 0.99% negative position.
The resurgent selloffs were mainly in high cap stocks, amidst profit-taking in low and medium cap equities that rallied recently across sectors and stocks during the previous week’s attempted rebound. Market breadth for the period closed negative with decliners outnumbering advancers in the ratio of 37:27, just as the share price of Guaranty Trust Bank, University Press, Tripple Gee and Stanbic IBTC were adjusted for the full-year and interim dividends declared by their boards.
The energy behind the week’s performance, however, remained weak as shown by the Money Flow Index at 10.29 basis points, down from 15.98bps in the previous week, indicating that funds left some stocks in the midst of indecision, the confidence crisis and low liquidity in the system. Sentiments turned mixed with a ‘sell’ position at 68%, while ‘buy’ volume was 32% on a transaction volume index of 0.71.

NSEASI Weekly Time Frame
The index chart shows that the market attempted to make a lower low in the week under review, but for the current low prices of a number of fundamentally sound stocks, we expect bargain hunting to gather momentum in this new trading week.
We, therefore, expect improved overall market performance on low valuation.
The current chart pattern reveals a reversal as the index continues to trade below the 20 day moving average and on top of the lower band of the Bollinger, just as the Relative Strength Index reads 33.49. But then, Money flow at 10.29 points on the weekly chart.

Mixed Sectoral Indices
Meanwhile, the sectorial indices were largely bullish last week, except for the NSE Consumer Goods, as well as the Oil/Gas indexes that closed down by 1.34% and 0.02% respectively, while the NSE Insurance index led the advancers, after gaining 0.59%. It was followed by the NSE Industrial Goods with 0.59%; just as the NSE Banking index’s 0.20%.
Transaction volume for the period rose by 220.50%, while value rose by 88.43%, after 2.34bn shares changed hands for N19.71bn, compared to the previous week’s 725.61m units worth N10.46bn. During the week also, Access Bank released its audited half-year result showing flat gross earnings and bottom-line, despite which the directors declared a 25 kobo interim dividend per share, preferring to conserve most of the net profit.
Cornerstone Insurance and International Breweries were the best-performing stocks for the period under review, after topping the advancers’ chart with 28.57% and 23.08% gains respectively, closing at N0.27 and N12.00 per share on low price attraction and market forces. On the flip side, University Press and Ikeja Hotel lost 18.20% and 18.18% respectively, closing at N1.12 and N1.17, on price adjustment and market forces.

Market Outlook
We expect a mixed performance due to profit-taking and expectation of the global economy and inflows arising from the 2019 budget implementation. However, discerning investors should take advantage of low valuation to buy into interim dividend stocks and other undervalued equities that have strong potentials to rebound with the general market.
Also, take into consideration the expected economic reforms as the government’s new cabinet swings into action, just as plans by the Central Bank of Nigeria (CBN) to reduce banks’ participation in government securities will expectedly boost private-sector lending, drive economic activities and investments.
Selloffs may slowdown in highly capitalized stocks due to portfolio restructuring. Hence, overall market performance may remain mixed, amidst the prevailing positive sentiments and breadth.
Market players should maintain a cautious outlook due to the low investor confidence, liquidity and the wait for major economic triggers. Hence, we advise investors to trade cautiously in the short-term, with their gaze fixed on blue-chip stocks that are selling more than 40% below their 52 weeks high, as we await positive catalysts to drive market recovery.
That notwithstanding, we would not overlook the possibility of a bargain-hunting motive supporting positive performance, especially with many fundamentally sound stocks remaining underpriced. With the prices of major blue chips continuing to drop in recent weeks, we expect speculative trading to shape the market’s direction this week, despite the seeming negative outlook.