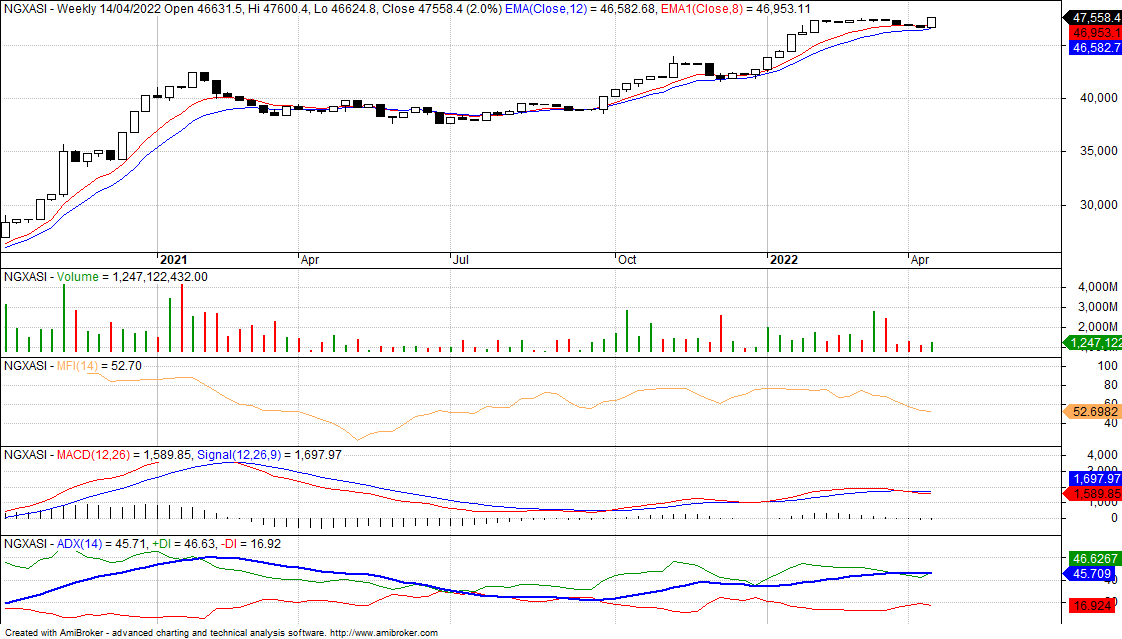 Trading activities on the Nigerian Exchange last week turned bullish as the benchmark index recovered its losses of the previous weeks resulting from panic selloffs and profit-taking due to global trends, arising from the aftermath of the war between Eastern European neighbours- Russia and Ukraine. Also, there were a couple of price adjustments in blue-chip and large cap stocks that pulled back the market down, creating attractive entry for smart money.

Especially after the institutional investors and other market players have done their due diligence on the recently released 2021 financials, which revealed the undervalued states of many stocks. It also showed the expected growth of these companies on the strength of sectors and industry fundamental news and other factors that will impact the performances of these companies positively, despite market volatility and uncertainty surrounding Nigeria’s pre-election year.

Market players are cashing in on the recent pullbacks to position in undervalued stocks with high upside potentials, which sustained the positive sentiments that dominated the week, just as the Money Flow Index revealed the entrance of funds into the equity space. This supported the increase in transaction volume during the period, despite being a four-day week, due to Easter holidays. During the week also the National Bureau of Statistics released the Consumer Price Index for the month of March, showing an uptick in inflation to 15.92%, from 15.70% in February, revealing three straight months of rise in inflation year-to-date, owing to the soaring food and energy prices, caused by the high cost of private power generation by many families and businesses.

The first quarter earnings season kicked off in the midst of rising cost of production and inflationary condition in the week under review with impressive numbers from United Capital, Infinity Trust Mortgage Bank, Living Trust Mortgage Bank, while the Q1 earnings report from Union Dicon Salt was not only below expectation, but disappointing. These expected numbers will demonstrate how well or not companies have been able to deal with the negative effects of the cost-push inflation on their performances in this new financial year. History has shown that for the most part, equities are actually a pretty good hedge against inflation, as companies push up prices in response to rising input costs.

The early stage of an inflationary cycle is where equities tend to do best. After that time, consumer sentiments sour, demand falls as prices rise, and so company revenues and margins suffer. But we are now at the early stage of this inflationary cycle, so we expect earnings to hold up. In the new week more companies’ earnings that would usually benefit from rising yields anyway as this increases their net interest margin. The energy sector also should report huge numbers on the back of surging energy prices. So, for now, we remain in a recovery and bullish camp, albeit with some expected more triggers along the way.

The failed peace talks between Ukraine and Russia in the face of the increase in sanctions imposed on the aggressor by the west continues, as Russia tries to reduce the impact, while gravitating toward allies like China and India. Also, central banks across the world continue to hike rates to checkmate effects of the rising inflation rate, which in mature economies is already hitting new highs.

This is already changing the global economic direction and expectations for 2022, even while COVID-19 remains potent.  If this war in Ukraine is not put to an end soon, it may lead to another round of global economic depression or recession. Already, the World Bank Group in its latest Economic Update released on Sunday predicted that the raging war and sanctions on Russia is already negatively impacting economies around the globe, with emerging market and developing countries in the Europe and Central Asia region hardest hit. The war, the group said, has added to mounting concerns of a sharp global slowdown, surging inflation and debt, and a spike in poverty levels, resulting in economic impacts that have reverberated through multiple channels, including commodity and financial markets, trade and migration links and adverse impact on confidence.

Meanwhile, the trading environment and conditions in the Nigerian market have changed on improved traded volume and positive sentiments, suggesting that more investors are buying more into blue-chips at a time of price adjustment for dividends recommended by their various boards. This is amidst reactions to the 2021 corporate actions and impressive earnings released so far, as reflected in the high payout ratios of most quoted companies that submitted their financials lately. This continued volatility may not be unexpected given the high-level of uncertainty and risks associated with a pre-election year.

The ongoing rally in the market requires proper technical analysis tools for timing your trades to avoid exposing your funds to unnecessary risks. Your investment time frame should determine the multiple time frames or charts you deploy when charting to make a decision. Buying into a strong group of stocks and sectors at the right time makes the difference in your portfolio and helps you to build wealth consistently in any market situation.

The trading strategies that will help you to navigate this current market trend include Learning and understanding how to use specific technical analysis tools. Investdata Technical Tool Box makes it easier for you to understand and use them effectively to enhance your trading results and bottom line. Try and get them, if you have not made an order.

In the midst of bullish trends witnessed during the week, the share prices of Fidelity Bank, NAHCO and Meyer, among others, hit new 52-week highs, as investors reacted to their strong numbers and corporate actions announced.

At the end of the week also, the NGX index action maintained a positive outing for a straight five trading sessions to recoup the losses recorded in the past four weeks to remain in the markup phase. Market capitalisation hit a new high of N25.63 trillion, after the composite index tested the last resistance level of 47,600.37 basis points that ushered in a new 14 year high as all eyes are set on the Q1 scorecards with hope that they will support the uptrend. The rising inflation is, however, a threat already with increased negative returns in the fixed income market. This may further attract more funds into stocks as hedge against inflation and protection of capital. Trading during the week opened on a positive note, as the NGXASI gained 0.22%, being an extension of the previous Friday’s green position, which was extended into the following day, when the index closed 0.72% higher. This trend was sustained at the midweek and Thursday when the market gained 0.34% and 0.40% respectively, bringing the week’s total gain to 1.99%, compared to the previous week’s decline of 0.45%.

Equity prices during the week closed higher after low, medium and high cap stocks dominated the top advancers table, amid buying pressure and repositioning of portfolio ahead of move Q1 numbers, as players taking advantage of the ongoing rally and breakout to buy-in.

We note that price adjustments during the week did not impact the NGX index, as a result of positive sentiment and strong buying interest, a situation that was reflected in major sectoral indexes that closed higher. This followed the rekindled buying interests in banking, telecom, consumer, industrial, insurance and energy stocks including the recently markdown Zenith Bank, GTCO, UBA, MTNN, Transcorp and Stanbic IBTC that some made payment for dividend, while others payment dates are ahead.

Market breadth for the week was positive as gainers outnumbered losers in the ratio of 51:18 on positive sentiments, as revealed by the investor sentiment report showing 96% ‘buy’ volume and 4% sell position. Money Flow Index, however, declined to 52.70bps from the previous week’s 53,98 points, an indication that funds left the market on a weekly time frame, while daily chart had confirm inflow of funds into equity space.

The NGX’s index action remains strong on a daily and weekly chart, as the index trades above the ‘T’ line on bullish engulfing candle to form a double top on relatively low traded volume and above 20- and 50-day moving average to signal strength. The candlestick formation, at the end of the week showed that the market is an uptrend, as market players digest the 2021 audited financials already released to reposition their portfolios for Q2, as Q1 corporate earnings give market direction. The candlestick pattern indicates a possible reversal of trend or continuation, depending on market forces in the new week. Meanwhile, long-term market recovery is strong. Also, the uptick in inflation remains a threat to fixed income market yields and return, as oil prices continue to oscillates and support market fundamentals. The NGX at this point is creating new buying opportunities for dividend income investors and traders if it breaks out 47,613.72points.

All the sectorial performance indexes for the week were in green, as NGX Banking led the advancers after gaining 5.59%, followed by Consumer Goods, Energy, Industrial goods and Insurance with 1.89%, 1.59%, 1.55% and 1.14% respectively.

The best-performing stocks during the week were Meyer and Learn Africa after gaining 41.59% and 20.23% respectively, closing at N1.60 and N2.08 per share on market sentiment and earnings expectation. On the flip side, Academy Press and Prestige Assurance lost 18.64% and 11.11% respectively, at N1.44 and N0.40 per share, purely on profit taking and selloff.

We expect mixed sentiments and trend in the new week, as profit taking and reactions to Q1 corporate earnings currently flowing into the market, just as portfolio repositioning for Q2 will continue as market players analyzing economic data and numbers to guide their decision. Also, investors and traders continue reacting to the earnings power, as the revaluation of quoted companies on their earnings performance and growth prospects continue while investors await the Q1 2022 numbers. We note that income investors have sustained buying into dividend-paying stocks,