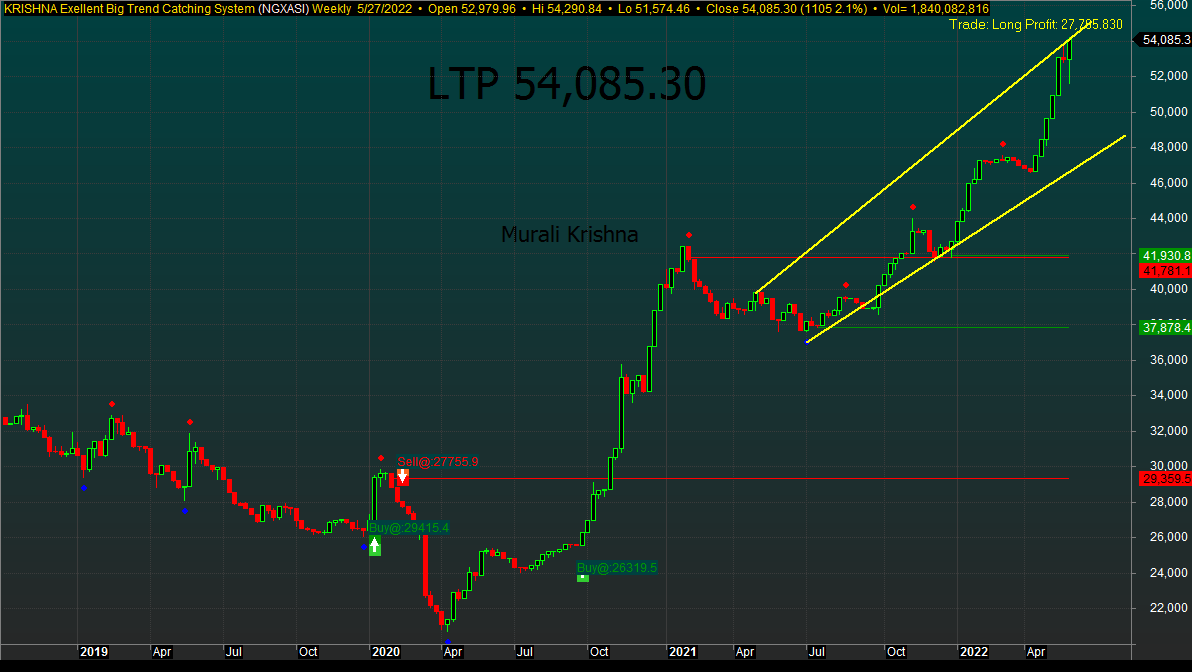 Trading activities in the last full trading week of the month closed higher on the Nigerian Exchange with the benchmark All-Share index had a mixed trend and positive momentum, reversing the previous week’s negative outing and resisting further decline. This was driven by bargain hunters buying into large-cap, especially telecoms giants Airtel Africa that led the rally for the period ahead of its dividend qualification date and positive sentiment for that sector.

Despite the rally, there was profit-taking within that same week, as the high-priced stocks that control the 70% of market capitalization, pushed the index to break out the 54,000 psychological lines to trade around August 2007 highs, as it tested 54,290.84 basis points on buying pressure, trading above the shortest moving average. Again, the month defied the trading mantra of “sell in May and buy in October,” as Month-To-Date gain stood at 8.96% on continued sector rotation.

In the period under review also, the share prices of Jaiz Bank, AIICO Insurance and Prestige Assurance were adjusted for the four kobo, two kobo, and 0.015 kobo dividends recommended by their boards.

As the market extended gains, should you be aggressive in positioning or profit-taking at this level, let your trading and investing objective guide you by trading your plans and, at the same time, allow your fundamental analysis and technical tools to manage risk. Even when you don’t want to miss out on the next wave as market players weigh on impressive corporate earnings, despite a 0.87% Q1 2022 GDP contraction. Also, commodity-backed stocks are finding their bottom as rising inflation threats fixed income market yields in the face of the interest rate hike. Stronger earnings of quoted companies would support higher earnings and dividend yields. Looking at interim dividend-paying stocks in banking, telecommunication, industrial, energy, agriculture, and consumer goods, the NGX index action rebounded powerfully after panic selloffs triggered by the CBN rate hike.

Hedging against inflation or a down market also enables you to be active in the market when the movement turns up, so you don’t miss the next bull action because you did not know when to jump in. Here, let me make it clear, I am not suggesting that you should buy and hold through a bear market (even if you have a hedge). In many bear markets, just as our market correction is underway from the recent bull-run, there are often sectors within that are in good tradable bullish trends at these different seasons or market cycles.

In today’s market, there have been sectors of the market that have done well. So there is a strategy that works in bull and bear markets and is constantly creating new big trend trades. Simply put, the strategy of investing in market-leading sectors at the right time. Put differently, being in the right sector at the right time is often the difference between whether you trade profitably, and have a great year, or one filled with losses.

Already, all eyes are on March year-end audited earnings reports that will start hitting the market any moment, especially from Northern Nigeria Flour Mills, which will be releasing its result next week. Nigeria’s central bank has joined the global trend of a rate hike as MPR was adjusted up by 150 points from 11.5% to 13% to check the spiralling inflation, while others like the Bank of Japan (BOJ) left their rates unchanged, and instead increased stimulus to support the economy in the face of rising global inflation arising from the lingering war between Russia and Ukraine. China, in its own reaction cut rates, while preparing to reopen some of its provinces that were locked down due to the covid-19 resurgence, a situation that also contributed to the surge in crude oil prices during the week.

The trading strategies that will help you build wealth and navigate this current market trend include learning and understanding how to use specific technical analysis tools. Investdata Technical Toolbox makes it easier for you to understand and use them effectively to enhance your trading results and bottom line. Try and get them, if you have not made an order.

NGX All-Share index had a mixed trend of two trading sessions of down markets and three days of positive outings due to price appreciation in blue-chip stocks and telecoms giant- Airtel Africa which touched a new 52-week high at N1,767 each on Friday after its share buyback exercise, which attracted foreign and domestic buyers to the stock.

Trading for the week started on a negative note, thereby extending the previous day’s loss position after the index lost 0.21% on Monday, a situation that persisted on Tuesday on the news of the MPR hike to 13% depressed the market by 1.82%, before rebounding at midweek on the back of Airtel price appreciation to gain 0.89%. This trend was sustained on Thursday and Friday as the index went up by 0.58% and 1.76% respectively. This brought the week’s total gain to 2.09%, compared to the previous week’s 0.22% loss.

As market players’ buying interest in the telecoms sector and others push the NGX index to 54,085.30, market capitalization also gained a cumulative N595bn in the period to cross the N29tr mark. Stock prices and market indexes were on northward, with year-to-date return hitting 26.61%, due to positive sentiment for value and growth stocks.

The entry of smart money into the equity space has slowed down as institutional investors digest the nation’s macroeconomic data and hike in MPR amid the rising inflation and other geopolitical concerns. This is regardless of the low participation in the Nigerian market by foreign investors, according to the latest data by the Nigerian Exchange. This means that domestic portfolio investments are on the increase.

During the week of position-taking and selloffs, low, medium, and high cap stocks dominated the top gainer’s chart, amid selling and buying sentiment as portfolios reshuffling continued in expectation of more March year-end accounts, as investors take advantage of pullbacks and high earnings yields to accumulate positions.

Market breadth for the week was negative, as decliners outnumbered advancers in the ratio of 54:23 on mixed sentiments, as revealed by the investor sentiment report showing 92% ‘buy’ volume and 8% sell position. Money Flow Index was up at 64.65bps from the previous week’s 57.47 points, an indication that funds enter the market on a weekly chart to confirm the inflow of funds into equities, while on a daily time frame money flow is looking down to reveal that funds had left the market on profit taking.

The NGX index’s action remained strong on a weekly and daily charts after pullbacks to strengthen the recovery and uptrend, as the index trades above the ‘T’ line on s hammer candlestick formation that signals reversal and continuation of uptrend after testing major strong resistance levels of 54,290.84 points on a very high traded volume to remain above the 20- and 50-day moving average to reveal strength. The candlestick formation, at the end of the week, showed that the market is regaining momentum, as players digest the MPR and Q1 numbers already released, macrocosmic data, and other factors to reposition their portfolios for Q2 earnings seasons.  The candlestick pattern indicates a possible price correction or continuation of the trend, depending on market forces in the new week as last Friday’s trading pattern revealed buyers are in control.

Sectorial performance indexes for the week were red as NGX Insurance led the decliners, after losing 6.27%, followed by Consumer goods, Energy, Banking, and Industrial Goods with 3.94% 0.86%, 0.76%, and 0.67% respectively.

We expect a mixed trend amid market reactions to the recent hike in MPR, mixed audited 2021 and Q1 2022 financials of FBNH, March year-end earnings expectations, and repositioning for half-year earnings reports. As market players continued to digest Q1 2022 GDP and Q1 corporate earnings.  Also, investors and traders continue reacting to the earnings power, as the revaluation of quoted companies on their earnings performance and growth prospects continue. We note that income investors have sustained buying into interim dividend-paying stocks.