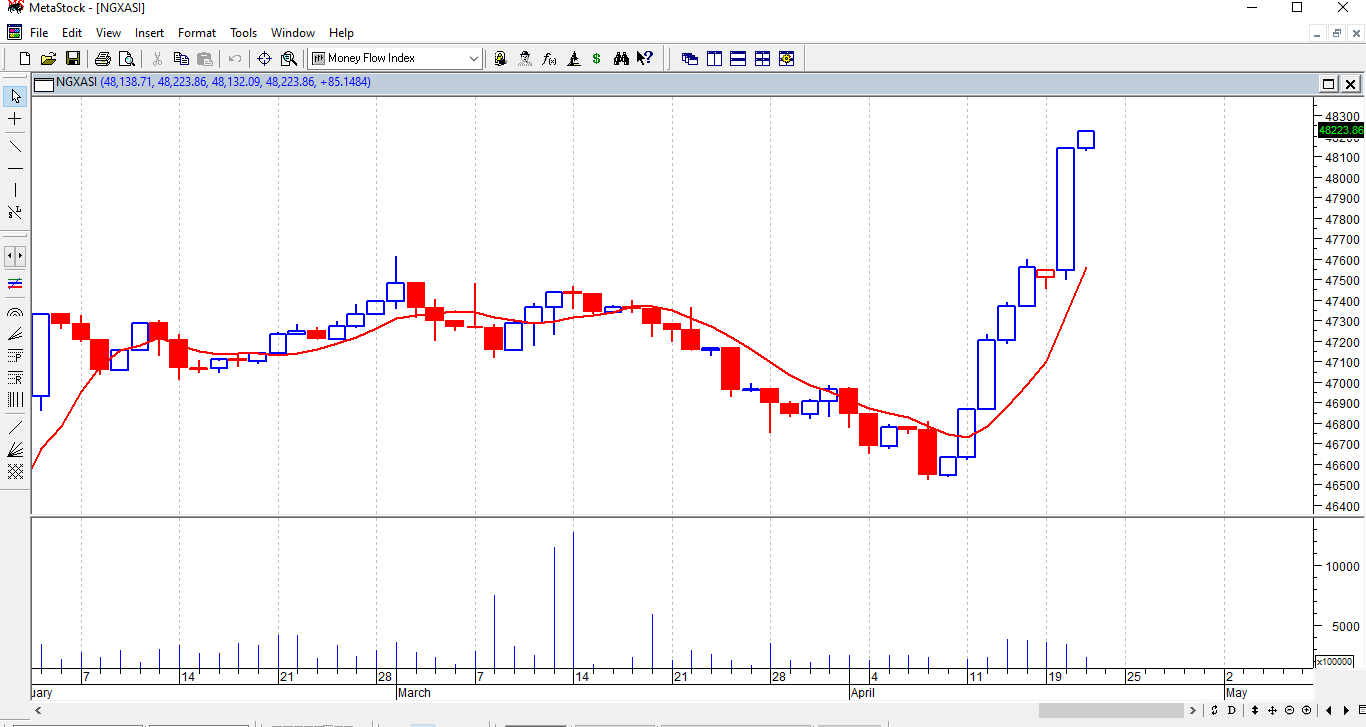 Nigeria equities closed higher on Thursday, as the market continued its bull run on bargain hunting in blue-chip and large-cap stocks, sustaining a positive sentiment as the benchmark NGX All-Share and sectorial indexes revealed position taking among market players and ahead of more Q1 numbers.

Also on Thursday, Lafarge Africa released impressive Q1 earnings with revenue and profit levels were up by 27% and 92% respectively, translating to earnings per share of N1.09, against the previous year’s 57 kobo. This numbers came after the close of trading and market, following which investors are yet to react. It has, however, given investors and traders an insight into what should be expected of the company in this financial year. Also Trans-Nationwide Express announced a bonus of one new share for 16 held as of the financial year ended December 31, 2021.

The NGX All-Share index sustained its positive outing for the second consecutive session, also on a positive market breadth to remain in the markup phase, as smart money makes effort to move prices higher. This suggests that funds are entering the equity space as players move to hedge against the soaring inflation and position earlier for the current financial year, especially long and medium-term investors.

Trading patterns and buying sentiments in the market confirmed that bulls are in charge, but players should not be carried away by this rally, as the NGXASI’s action broke out the 48,200.17 points to continue its  recovery momentum. It is also indicating the possibility of trend continuation as bargain hunters reposition in fundamentally sound stocks and sectors with positive news. These are expected to support growth in Q2 and for the rest of the year, despite the uncertainty that comes with every pre-election year.

The mixed outlook for the month of April and the quarter remains, as the filing of first-quarter earnings reports continue in the midst of corporate actions, qualification, price adjustment, AGM, and payment of dividends by listed companies. However, there is a need to watch the current trends, especially with bargain hunters still in the market cherry-picking fundamentally sound stocks. There are also the expected market reactions to the dividend markdown and payment dates of the companies on the exchange. We note that today is the qualification date for Total Energies, Fidelity Bank, GSK and Okomu Oil dividends of N18.20, 35 kobo, 45 kobo and N8.00 per share respectively, while Berger Paints’ price will be adjusted for its 40 kobo dividend.  These are likely to influence the market positively or otherwise.

Market players continue to watch the nation’s economic developments as recent forecast of World Bank put nation economic growth in 2022 at 3.4% and what is happening in the fixed income market space with yields and rates. Already, all eyes are on plans announced by the CBN during the last Monetary Policy Committee (MPC) meeting to fulfill its promised intervention in the distribution of premium motor spirit and diesel. The aim is to ease the pains of the scarcity among manufacturers, SMEs, and households across the country, in the face of the epileptic power supply.

Despite, the bull rampage, investors and traders should watch their stop-loss and profit targets to adjust positions and take profit as their target is met. Tentatively, the uptick in the fixed income market yields and oscillating rates of TBs may support the flow of funds into other assets like equity and real estate.

There is also the impact of the Ukraine and Russia war, in the face of subsiding cases of COVID-19 in China, resulting in gradual reopening after the lockdown in some provinces have continued to influence commodities prices, especially crude oil which rebounded in the international market to trade above $106 per barrel, after touching $120.27 in the previous days. This has continued to push production costs up, worsening inflationary pressure across the globe and weakening economic outlooks for 2022 and 2023, thereby influencing the monetary policy of central banks as they move to checkmate fallouts of the conflict on the global economy to avoid a global recession.

The uptrend as seen in the NGX index’s action in recent times in the midst earnings reporting season has created ‘buy’ signals for smart and discerning traders. However, we warn that market corrections are not over yet because profit taking is part of the market dynamics, hence the need to rely on your stop-loss effectively. This is because the uptrend signals that profit-taking is underway, especially when it gets to the level where it pulls back.

Thursday’s candlestick formation reveals that buyers are in control, a trend that may lead to a continuation or reversal, depending on market forces as all eyes are on companies’ Q1 results. The NGX index’s action broke out another major resistance level of 48,202.12 basis points, trading above its 20-day moving average, as volatility persists and the uptrend towards the next resistance level is sported around 48.465.17bps. Should the index break this point, the next visible level is 48,613.72 points.

Technically, the NGX index is making a higher high, as the session witnessed strong positive sentiment that could be linked to the repositioning of portfolios ahead of Q1 numbers and reaction to corporate action dates. The possibility of the market sustaining this trend is a function of the state of Q1 numbers and improved economic conditions this Q2, following which we advise investors to play defensive with sectors having strong demand and dividend stocks to reduce investment risks around the market.

Meanwhile, Thursday’s trading started on the upside and was sustained for the rest of the session on buying interests and accumulation, a situation that pushed the NGX’s index to an intraday high of 48,223.86 basis points from its lows of 48,132.09bps, before closing above its opening point at 48,223,86bps.

Market technicals were positive and mixed as volume traded was lower than the previous day, in the midst of breadth favoring the bulls on buying sentiment as revealed by Investdata’s Sentiments Report showing 100% ‘buy’ volume. The total transaction volume index stood at 0.73 points, just as the energy behind the day’s performance remained strong with Money Flow Index slightly better at 77.54pts, from the previous day’s 77.24pts, indicating that funds entered the market.

Attention: If you have not signed up for INVESTDATA’s buy and sell signal setup, don’t delay, because the number of stocks entering their buying range has just increased to 30 as they build a new bullish base and positive chart patterns to be on our watchlist. These stocks have double the potential to rally, considering their earnings prospects and the oscillating moves in a recovery market and economy.

The upturn was driven by buying interests in Zenith Bank, Wapco, PZ, GTCO, Fidson, Ardova, Eterna, Oando, and Honeywell, among others. This impacted positively on Year-To-Date gain, which increased to 12.89%. Market capitalization growth stood at N3.089tr YTD, representing a 16.03% rise over the opening level for the year.

Performance indexes across sectors were bullish, led the NGX Oil/Gas led the advancers after gaining 1.61%, followed by Banking, Insurance, Consumer  and Industrial goods with 0.51% , 0.44%, 0.19% and 0.06% respectively.

Market breadth was positive, as gainers outnumbered losers in the ratio of 29:9; just as transactions in volume and value terms were down, as stockbrokers crossed 244.69m shares worth N3.15bn. Volume was driven by trades in Custodian Investment, Oando, Fidelity Bank, NB and Transcorp.

The best-performing stocks were Berger Paints and Eterna which gained 10% each, closing at N7.70 and N6.05per share respectively on market forces and the ongoing mandatory takeover. On the flip side, SCOA and ABC Transport lost 9.76% and 6.45% respectively, closing at N1.94 and N0.29 per share, on selloffs and profit-taking.

We expect a mixed trend, being the last trading session, with profit-taking underway, amid repositioning as market players digest the 2022 unaudited financials and revaluation of quoted companies ahead of more Q1 2022 earnings expectation. This is expected to support this uptrend during this earnings season, amidst oscillating oil prices, just as the market continues to interpret economic data in relationship with the crude oil price and other factors, in the midst of profit-taking and portfolio rebalancing. This will result in market players targeting fundamentally sound and dividend-paying stocks in the hope of dividend announcements, while the International Monetary Fund projected the nation econmy to grow by 3.4% in 2022 on rising oil price.

February 2, 2023 9
NGXASI Chalk 3.88% In January, But Volatility Ahead Amid Mixed Outlook, Price Corrections