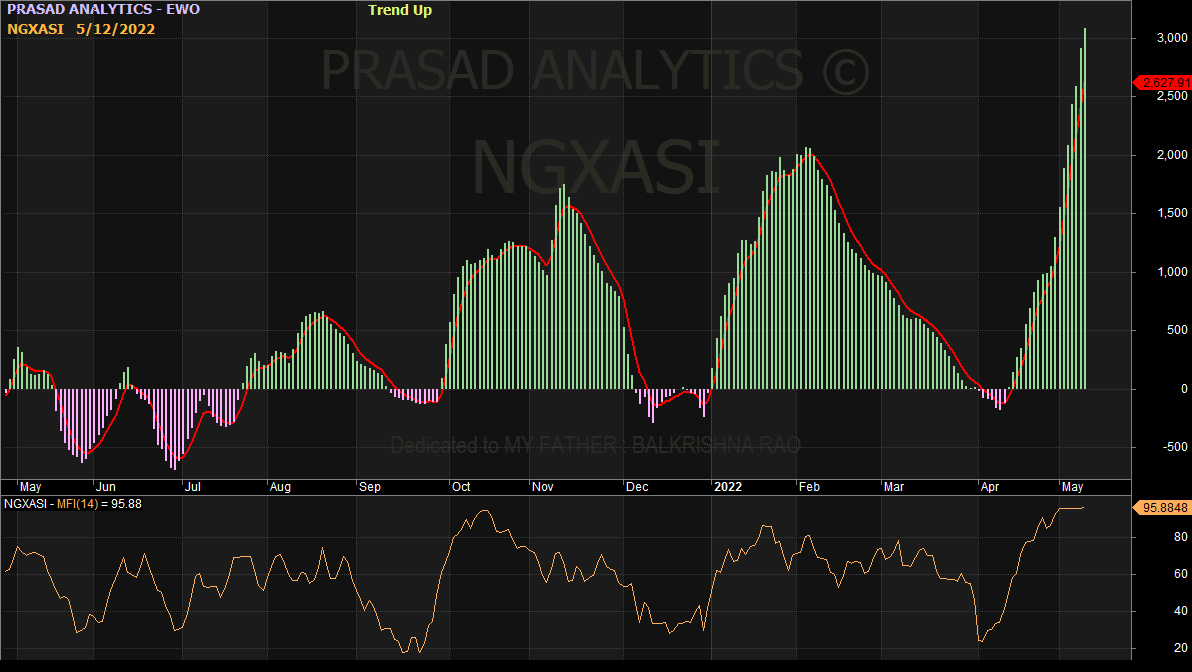 Market Update for May 12

The nation’s stock market continued its upbeat on Thursday, despite the mixed trend and profit-taking activities that hit the market, following which the benchmark NGX All-Share Index closed on another positive note, amid the increased buying interest in consumer and industrial goods. This impacted the NGX index positively as it crossed the 53,000 mark to test 53,064 basis points again for the second time, before pulling back, while still extending the bull-run for a second successive session.

The double top chart pattern formation at the close of Thursday’s trading on an above-average traded and positive market breadth signals a pullback or correction, which needs confirmation at Friday’s session, being the last trading day of the week, depending on market forces. The session’s bull dominance resulted from the demand for the shares of Lafarge Africa, Presco, Okomu, Flour Mills, Fidson and others, despite the profit-taking in MTNN, BUA Foods, and Cadbury, among others. However, the market is yet to react to the impressive full-year earnings from Airtel Africa that was released to days ago.

As the nation’s economy sustained its positive GDP growth in Q3 and Q4 2021 as shown in the report released by the National Bureau of Statistics (NBS), as all eyes are on the 2022 Q1 national output expected for release May 24, 2022, while the April consumer price index is slated for release on Monday, May 16, 2022, to show the true state of the economy. These expected macroeconomic indices and the decline in fixed income market yields in the face of higher stock market earnings yields are likely to attract more funds into equities. Also, while all eyes are on the next meeting of the Monetary Policy Committee (MPC), we note that the body movement from the CBN signals a slim possibility of rate hike.

The expected March full-year earnings reports are likely to support the uptrend, depending on the state of these numbers. The following companies: Flour Mills Nigeria, Honeywell, University Press, Learn Africa, Academy Press, Redstar Express, and NNFM, among others, are likely to release their reports between now and June 30, 2022. We note that investors are continuing their search for commodity-backed stocks with good fundamentals and positive returns above the inflation rate, besides the fact that players are keenly observing what is happening on the nation’s economic front, as the Central Bank of Nigeria (CBN) Treasury Bills rate for the 364-day decline slightly at the end of the weekly auction.

On this note, we expected the fixed income market players to hedge against the spiraling inflation in stocks with high earnings yields. Stakeholders are, however, anxiously awaiting plans by the CBN to intervene in the petrol products sector, which as announced is targeted at making premium motor spirit and diesel available, thereby easing the pain of manufacturers, SMEs, and households across the country, in the face of the epileptic power supply.  Just as the National Assembly ordered the NNPC to provide aviation fuel for local airlines.

Oil price continues to oscillate, trading above $105 per barrel in the international market, in the midst of the EU’s embargo on the importation of Russian oil, an increase in production output by OPEC, and a resurgence of the Covid 19 in some provinces in China that resulted to lockdown in affected areas. The high cost of crude oil and diesel recording its high price are pushing production and living costs up, heightening inflationary pressure across the globe on a weak economic outlook, thereby influencing the monetary policies of central banks as they move to checkmate the impacts of the Russia-Ukraine conflict on the global economy and avoid a global recession. The uptick in domestic inflation is a potent threat to the fixed income market and investment yields, which should be an indication that more funds may likely flow into the equity space as institutional investors balance their portfolios.

However, we warn that market corrections are underway as a result of profit-taking, hence the need to rely on your stop-loss effectively at this point, even as the markup phase signal continuation, especially when the high cap stocks that control 70% of market capitalisation move up ahead of reactions to their earnings and expected dividend payments in May and June 2022.

The NGX index’s action continued its rally to remain in the markup phase, trading above the ‘T-Line’ and 20-day moving average. The market is still strong ahead of any correction since the strong resistance level is 53,100bps which it tested recently, while volatility persists and uptrends towards the next breakout sported around 53.064.50bps. Should the index break this point, the next visible resistance is 53.288,84bps.

Technically, the NGX index is strong and rallying on impressive earnings and strong demand for stocks. The possibility of the market sustaining this trend is high as a function of stronger corporate earnings and improved economic conditions during this season, following which we advise investors to play defensive stocks to reduce investment risks around the market.

Thursday’s trading started slightly on the upside which was sustained for the rest of the session, despite oscillating on buying interest in blue-chip stocks and profit-taking in others, a situation that pushed the NGX’s index to an intraday high of 53,069.29bps from its lows of 52,843.48ps, before closing above its opening points at 52,917.76 bps.

Market technicals were positive and strong, as volume traded was higher than the previous day in the midst of breadth favoring bulls on a selling sentiment as revealed by Investdata’s Sentiments Report showing a 33% ‘buy’ volume and 69% sell position. The total transaction volume index stood at 1.25 points, just as momentum behind the day’s performance remained strong with Money Flow Index inching up at 95.88pts, from the previous day’s 95.80pts, indicating that funds entered in the market.

Meanwhile, Thursday’s uptrend was driven by demand in Presco, Okomu Oil, Lafarge Africa, Fidson, Zenith Bank, GSK, PZ and Flour Mills, among others, raising the Year-To-Date gain to 23.88%. Market capitalization growth stood at N6.29tr YTD, representing a 27.60% rise over the opening level for the year.

Performance indexes across sectors were in mixed, as NGX Insurance and Banking closed lower by 2.36% and 0.86% respectively, while NGX Consumer Goods led advancers after gaining 1.37%, followed by industrial Goods and Energy with 0.71% and 0.46% respectively.

Market breadth remained positive, as gainers outnumbered losers in the ratio of 31:23; just as transactions in volume and value terms were mixed after stockbrokers crossed 426.02m shares worth N5.70bn. Volume was driven by trades in Transcorp, Zenith Bank, Wapco, Abbey Building and Accesscorp.

We expect a mixed trend on profit-taking, being the last trading day of the week, just as sector and portfolio rotations continue on the better-than-expected Q1 corporate earnings released, ahead of March year-end 2022 audited financials with dividend announcements to support an uptrend in the new month amid the rebound in oil prices. Also, the market continues to interpret economic data in relationship with the crude oil price and other factors, in the midst of profit-taking and portfolio rebalancing. This will result in market players targeting fundamentally sound and dividend-paying stocks in the hope of dividend announcements, as 2021 Q4 GDP up at 3.98%, while the International Monetary Fund has projected the nation’s economy to grow by 3.4% on rising oil price in the international market.

February 2, 2023 18
NGXASI Chalk 3.88% In January, But Volatility Ahead Amid Mixed Outlook, Price Corrections