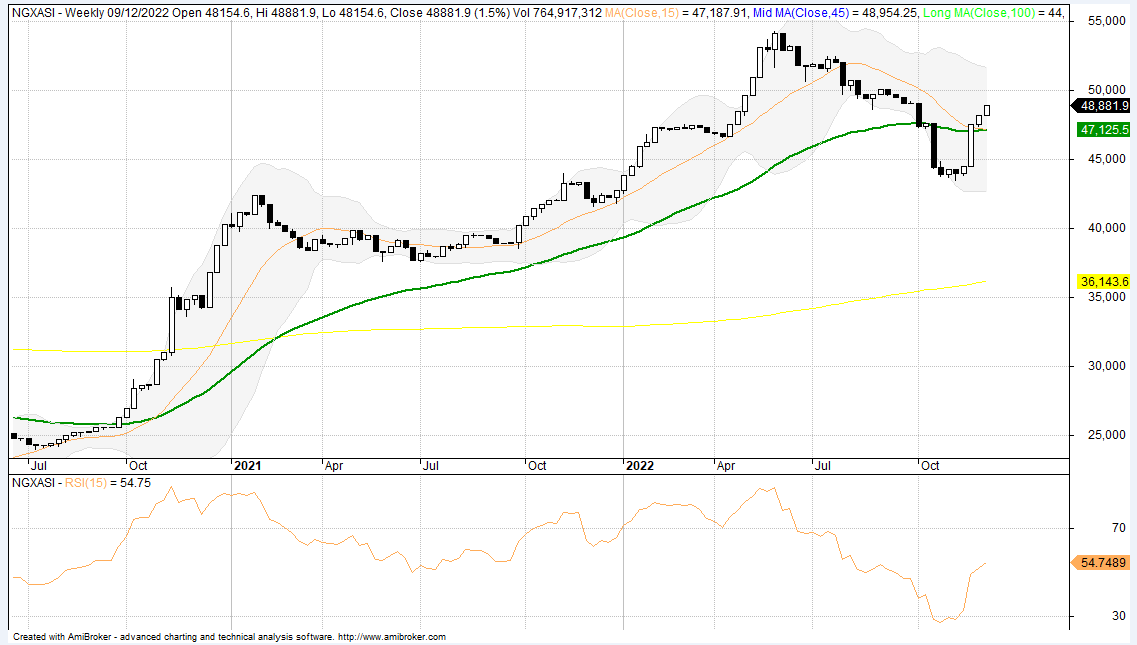 The bullish transition on the Nigerian Exchange continued back to back for the fourth consecutive weeks on positive sentiments and strong momentum, driven by value as revealed by low price to earnings ratio of the market and individual stocks, buying interests in highly priced stocks and blue chip companies with sound fundamentals ahead of the year end seasonality. Also, the benchmark NGX All-Share Index over the period under review closed higher, breaking out another support level that turned resistance as the uptrend continued on a less-than-average traded volume and positive market breadth.

At the current market situation, it is very important for players to understand the impact of market and economic cycle in their investment decisions, knowing that traders and investors are looking to pull money out of the market regularly by way of profit taking. As such, the only thing you are really looking for is the price of the stock you bought to move in your favour. On this note, common sense tells us that “Only Price Pays,” not news, not how much we love a stock or the company. If the price does not move, you do not make any money, period.

If price movement is what pays us, then it is only logical that we focus mainly on the price. Most indicators are based on price, so they lag the last traded price for an investment.  So, we focus on price action or structure, momentum and timing.

As we are entering the second half of the month, the eyes of all market player are on the expected November consumer price index from the National Bureau of Statistics, as they digest the latest Purchasing Managers’ Index for the months of November that expanded to 54.6 points from 53.7 in October, being the highest in the last six months, despite the negative aggressive rate hike by the CBN as they move to combat inflation. This has been worsened by the policy summersaults by the government’s economic managers amid the changing economic and political environment.

The buying patterns in the previous month has continued in the week under review, indicating that funds flowing into the market, notwithstanding the low transaction volume that is yet to really confirm the presence of institutional investors. We note the increasing volume in some individual stocks in the market, given that the NGX index has technically sustained its rally, as revealed by the trend and momentum indicators. Also, the index is trading above the 50-Day SMA and forming a bullish channel, trading above the T-Line and 50-Day EMA on the weekly chart. At this point, the possibility of institutional investors’ entry the market ahead of year-end seasonality and corporate actions in 2023 is high.

Also, profit-taking is expected at this stage after the market had rallied for four successive weeks, resulting in a 5.71% month-to-date gain, as investors’ continued realignment of portfolios on the strength corporate earnings and expected Santa Claus rally. Also, players are viewing all of these against the backdrop of the rampaging inflation as they hedge against the rising inflation in some stocks with high dividend yields and strong earnings to support higher payout as financial year end of many companies with December are around the corner.

As oil price continues its oscillation, pulling back to trade at $76.10 per barrel, after OPEC missed production quota by 310,000 bpd, Russia oil caped and China partial reopening after Covid 19 restriction, geopolitical tension and fear of recession as a result of high interest rate and inflation across the globe. Also supply tighten due to the Russia-Ukraine war that has been lingering.  The up and down movement of oil price also continues to drive volatility across the globe.

It was a bullish week of positive sentiment and buying interest in four trading sessions, and one down market due to profit taking, as demand for high cap companies like BUA Cement and other blue chip stocks supported the gain, breaking out resistance levels of 45,511.58 on a relatively low traded volume for the period.

Trading for the week started on a positive note, extending the previous session’s gain by 0.24%, which was sustained on Tuesday and midweek when the index chalked 0.20% and 0.12% respectively on buying interest in industrial goods and others. There was a 0.13% pullback on Thursday on traders cashing out their profit from the recent rally, followed by a sharp rebound the day after when the marked closed 1.06% her on the price appreciation by BUA Cement, which brought the week’s total gain to 1.51%, compared to the previous week’s 1.26% gain.

The week’s top advancers’ table was dominated by low, medium and high cap stocks, amid buying sentiment in blue chip companies, despite the low volume and volatility, as portfolio repositioning continued. Also notable is the fact that investors are taking advantage of low price to buy into value and high dividend yield companies as recovery persist.

Market metrics indicate a positive breadth as gainers outnumbered losers in the ratio of 31:26 on a buying pressure as reveal by investdata sentiment report showing 100% ‘buy’ volume and 0% sell position. Money Flow Index looking down to 27.35bps, from the previous week’s 30.38points, an indication that funds left the market on a weekly chart to reflect positioning and profit taking in some major sectors and individual stocks.

The NGX index’s action had formed a cup and handle chart pattern on a weekly time frame as above   the T-line and 50-Day EMA, reaching a topping level that signaled profit taking or continuation of trend on a positive breakout that needs confirmation on Monday as the market opens. We note that the volume that supported this recovery and rally remain weak and below the market’s traded average, just as corporate actions and year-end seasonality could support an uptrend.

Sectorial performance indexes for the week closed green, except for 0.25% slide by the NGX Banking, while the NGX Industrial Goods led the advancers’ after gaining 8.52%, followed by Consumer goods, Insurance, and Energy with 1.65%, 1.31% and 0.29% respectively.

Activities in volume and value were up, as investors exchanged 1.23bn shares worth N15.24bn, compared to the previous week’s 839.98m units valued at N12.42bn, with volume driven by Financial Services, construction and conglomerates. Specifically, the week’s volume was driven by trades in UPDC REIT, FBNH, Transcorp, ETI and Sterling Bank.

We expect a pullback and mixed sentiment on profit taking after the NGX index had formed a topping pattern on a weekly time frame. Even as it eyes 49,000 psychological level in the new week, Just as retracement to 48, 000 mark and below is possible on selloffs as events unfold globally and domestically here in the midst of interim dividend payment dates and bargain hunting as players expects November inflation report and position for full year financials.