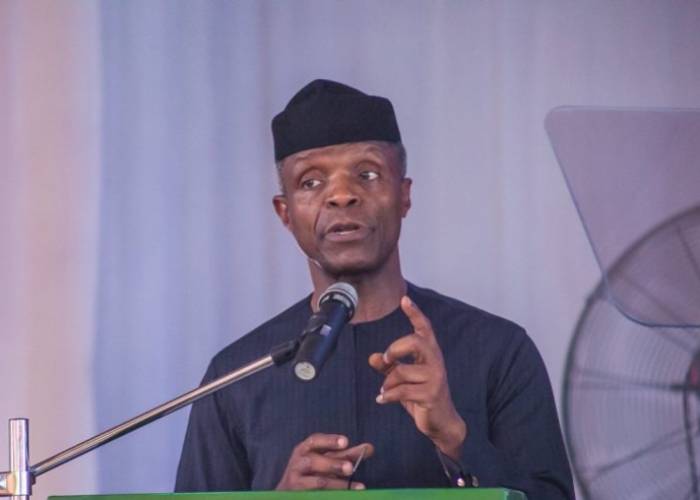 The Federal Government’s Economic Sustainability Committee rose from its first meeting of 2022, Monday, with ministers and heads of agencies reporting further progress in the implementation of the plan of the Muhammadu Buhari administration.

A major highlight of the virtual meeting chaired by Vice President Yemi Osinbajo, from the Presidential Villa, was the presentation on the N75bn Survival Fund made by the Industry, Trade and Investment Minister of State, Ambassador Mariam Katagum, from which all 36 States of the Federation would soon receive a minimum of N1.7bn. Already, according to a statement by Laolu Akande, Senior Special Assistant to the President on Media & Publicity, Office of the Vice President, Katagum said Lagos, Abia, and Kano States have crossed the bar, with Lagos reaching over N2.5bn, and Kano over N2bn. No State so far has received anything less than N1bn.

The statement recalled that in response to the fallout of the COVID-19 pandemic, President Buhari had in June 2020, mandated the Vice President – as chair of the Economic Sustainability Committee, to coordinate the implementation of the ESP aimed at cushioning the economic effects of the global pandemic.

Other major highlights of the presentations by Ministries, Departments and Agencies “include the report that about 2.1 million jobs have been retained or created through the implementation of the ESP programmes; and the approval of N10bn by the Nigeria Sovereign Investment Authority (NSIA) to fund the deployment and local assembly of 200,000 (off-grid) Solar Homes Systems under the ‘Solar Power Naija’ partnership between both the NSIA and Rural Electrification Agency (REA).”

In his presentation, the Minister of State, Budget & National Planning, Clem Agba, disclosed that while about 1.3 million jobs were retained through the MSME and Payroll support, 774,000 jobs were created from the Public Works Programme and 26,021 jobs from roads construction /rehabilitation.

The Committee was briefed that over 1.1 million Nigerians have benefitted from the different schemes under the ESP MSME Survival Fund, thereby saving millions of jobs. A breakdown showed there are 459,334 beneficiaries under the Payroll Support Scheme; 307,687 beneficiaries from the Artisan & Transport Scheme.

Similarly, 82,491 Nigerians are so far beneficiaries of the General MSME Grants Scheme, and another 17,468 of the Guaranteed Offtake Scheme. Also, 250,000 business names were registered free under the Survival Fund’s CAC Formalization Support Scheme.

Also, under the Solar Power Naija programme, the Managing Director/CEO of Rural Electrification Agency (REA), Ahmad Salihijo, briefed the committee that another 60,000 SHS are expected to be delivered in the first quarter of 2022 under the NDPHC-A-solar partnership, with at least 10,000 units to be assembled locally. This is besides the 200,000 solar connections to be funded by NSIA.

The ESP Solar Naija programme is designed to provide electricity access to 5 million households and will serve about 25 million Nigerians in rural areas and under-served urban communities nationwide.

The Minister of Humanitarian Affairs, Disaster Management and Social Development, Sadiya Umar Farouq, noted that the Rapid Response Register (RRR) component under the ESP has since commenced, with 374,759 beneficiaries paid so far, and another 391,185 Nigerians earmarked for payment soon.

The RRR is designed as an intervention to cushion the economic shocks of the COVID-19 pandemic on urban poor Nigerians currently not benefitting from the federal government’s cash transfer programme.

Regarding the progress of the Export Expansion Facility Programme (EEFP) component of the ESP, 281 companies have benefitted from the COVID-grant relief, while 1,105 companies are beneficiaries under the Export Development Fund (EDF), among other milestones.

While the EEFP aims to protect export businesses from the effects of the COVID-19 pandemic, and also safeguard jobs, the EDF is a statutory provision of the Nigeria Export Promotion Council and is being activated for the first time in the history of the Council under the ESP.

Also as part of the ESP, 100 MSMEs exporters have been listed on Amazon, the world’s largest e-commerce platform. The NEPC under the ESP also trained 4500 farmers & exporters on food safety and international standards, while 700 of them have now received international certification which only less than 50 had in Nigeria before now.

Besides, eight new Domestic Export Warehouses are currently being built, including in Lagos, Port Harcourt, Kaduna, and Abuja to ease supply chain constraints for exporters in the country, the statement stressed.

February 1, 2023 12
Analyst Note On The Downgrade Of Nigeria’s Sovereign Risk Rating By Moody’s