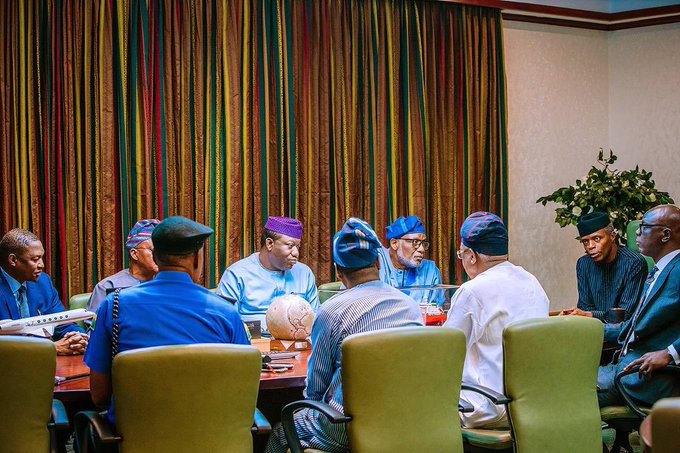 Vice President Yemi Osinbajo, on Thursday, met with governors of the country’s southwest states of Lagos, Oyo, Ogun, Ondo, Ekiti, and Osun; Abubakar Malami, Attorney General of the Federation; and the Inspector General of Police.
The meeting which was at the instance of the governors rose with an agreement that the regional policing initiative codenamed “Amotekun” in the southwest zone of the country, described as illegal by the AGF, be given legal backing.
The meeting also agreed that all hands “be on deck in addressing the security concerns across the country, it was agreed that the structure of Amotekun should also align with the Community Policing strategy of the Federal Government.”
According to a statement by Laolu Akande, Senior Special Assistant to the President on Media & Publicity Office of the Vice President, the meeting also agreed that necessary legal instruments be put in place by each of the states for proper implementation of the initiative.
The legal works are expected to “address all issues concerning the regulation of the security structure.”
Recall that the governors had asked to see President Muhammadu Buhari over the controversy surrounding the Amotekun Initiative. This was delayed by the President’s foreign engagement, following which he asked the Vice President to host the meeting, which according to the statement “was very fruitful and unanimous resolutions were made on the way forward.”