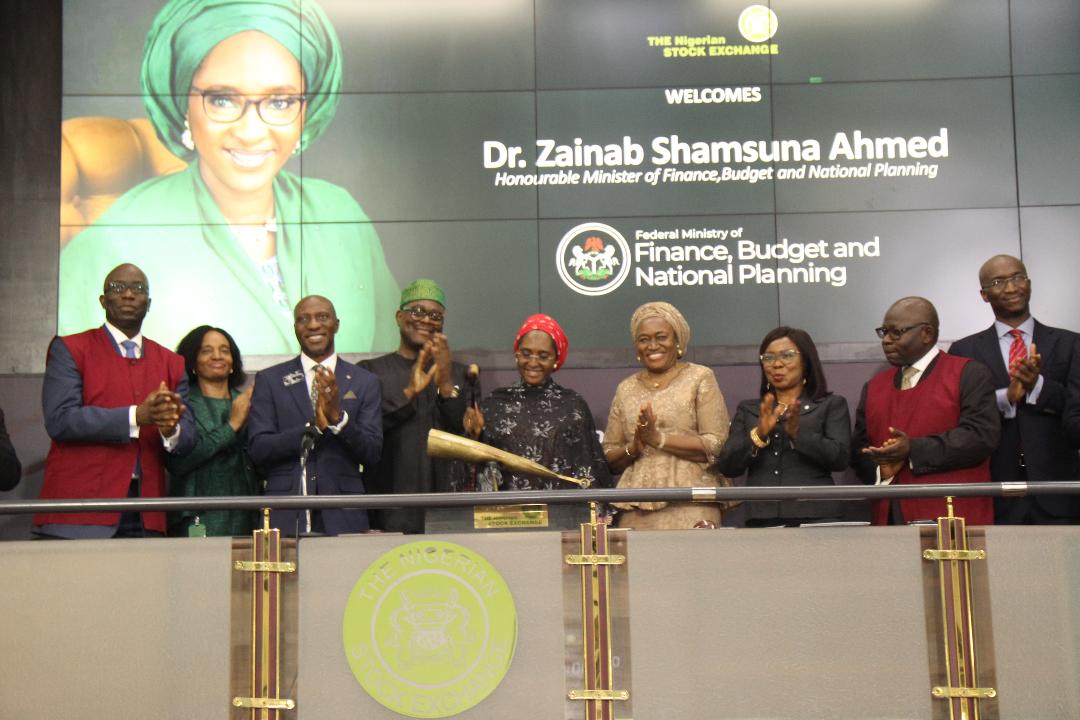 •To Partner Capital Market For Incentives For Attracting NNPC, Contractors, PFAs
•Says Recapitalisation Will Birth Strong CMOs
The Federal Government may have bowed to mounting opposition from labour and other stakeholders against its plan to borrow N2tr from the nation’s N10tr pension assets to finance yarning gaps in infrastructure.
Fielding questions when she met with capital market stakeholders on Monday in Lagos during a visit to the Nigerian Stock Exchange (NSE), Minister of Finance, Budget and Planning, Mrs. Zainab Shamsuna Ahmed, assured that “we (the Federal Government) won’t borrow from pension fund assets.”
The Vice President, Yemi Osinbajo, had while chairing a recent meeting of the National Economic Council (NEC), said the Federal Government had concluded plans to borrow the amount.
But President of the ULC, Joe Ajaero, was recently quoted as saying Nigerian workers “do not have confidence in the sincerity of our politicians to deliver on the area of safety of our life-savings when it is entrusted into their hands. They have already gorged themselves full with public wealth and nothing will stop them from doing the same with the pension fund if we are not watchful.”
Mrs. Ahmed, in answer to a question on the need for pension fund administrators to deepen their play in the stock market and act as a stabilizer, given the penchant for foreign portfolio investors to exit at the first sight of trouble, spoke of the need to understand challenges facing the pension industry.
Noting the need for incentives that would attract PFAs to the market, she admitted that “pension funds are very sensitive, so we have to be careful,” recalling that the enabling regulation allows them to invest up to 20% of their funds in stocks.
There must, therefore, be a reason why they are shying away from the market, hence the need to understand their peculiar challenges, which is why the government plans to engage Pencom, according to her.
As a way out, the Minister said the government is already “developing some long-term instruments to enable them to invest their funds without contravening provisions of the Pencom Act.”
Mrs. Ahmed assured the gathering of the Federal Government’s commitment to deepening and ensuring that the capital market plays its role as an enabler of economic growth and development.
This, she said, is why there are so many capital market-specific provisions in the Finance Act 2019, the precursor of the 2020 Budget, stressing the directive of President Buhari that the Act is reviewed annually, following which any other unresolved issue will be taken care of subsequently.
The Minister spoke of the government’s readiness to work with capital market stakeholders to create incentives capable of attracting government parastatals and large corporate to utilize the capital market for debt and equity issuance.
She was reacting to a question by Bolaji Balogun, chief executive of Chapel Hill Denham on the need to attract entities like the Nigerian National Petroleum Corporation (NNPC), Joint Ventures in the oil industry, government contractors and other large corporates, thereby easing the pressure on the government. Such a move, he noted, would not only deepen the market but improve tax revenue.
Such partnership, Mrs. Ahmed assured, would enable the government to decide whether it is necessary to make a directive compelling such a category of companies to come to the capital market, noting that the NNPC, is a corporation with its own board and management.
On the issue of recapitalization of stockbroking firms, which some operators say is unnecessary and capable of rocking the boat once again, she assured recapitalization is the way to go. Advantages of recapitalization in any industry, in her words, include mergers and acquisitions that will give birth to larger and stronger, rather than fringe players that would take advantage of ongoing demutualization of the NSE.
The Federal Government, she had noted in her address, is working at being among the top 100 countries on the World Bank ease of doing business global ranking by continuously improving the environment.
The minister was accompanied by Dr. Sarah Alade, Special Adviser to the President on Finance and Economy, Ms. Mary Uduk, Acting Director-General, Securities and Exchange Commission (SEC), chairman of the NSE council, Otunba Abimbola Ogunbanjo, Mrs. Catherine Echeozo, Second Vice President of the NSE, among others.
Welcoming the Minister to the NSE, Oscar Onyema, the chief executive, said beyond supporting the “capital raising efforts of government through innovative products such as the Green Bonds, the NSE has also developed a framework that supports the issuance, listing, and trading of tax credits; in order to complement the Road infrastructure development and refurbishment investment scheme.
“We are equally positioned to unlock significant investment value for the nation through the listing of public utilities and state-owned enterprises, as well as promote the knowledge economy in terms of public sector capacity building through our technology-based learning management system – the NSE X-Academy.”
He pledged continued partnership through the NSE’s government relations activities while advocating “policies that deliver an enabling business environment for the Nigerian Capital Market and the economy at large.”