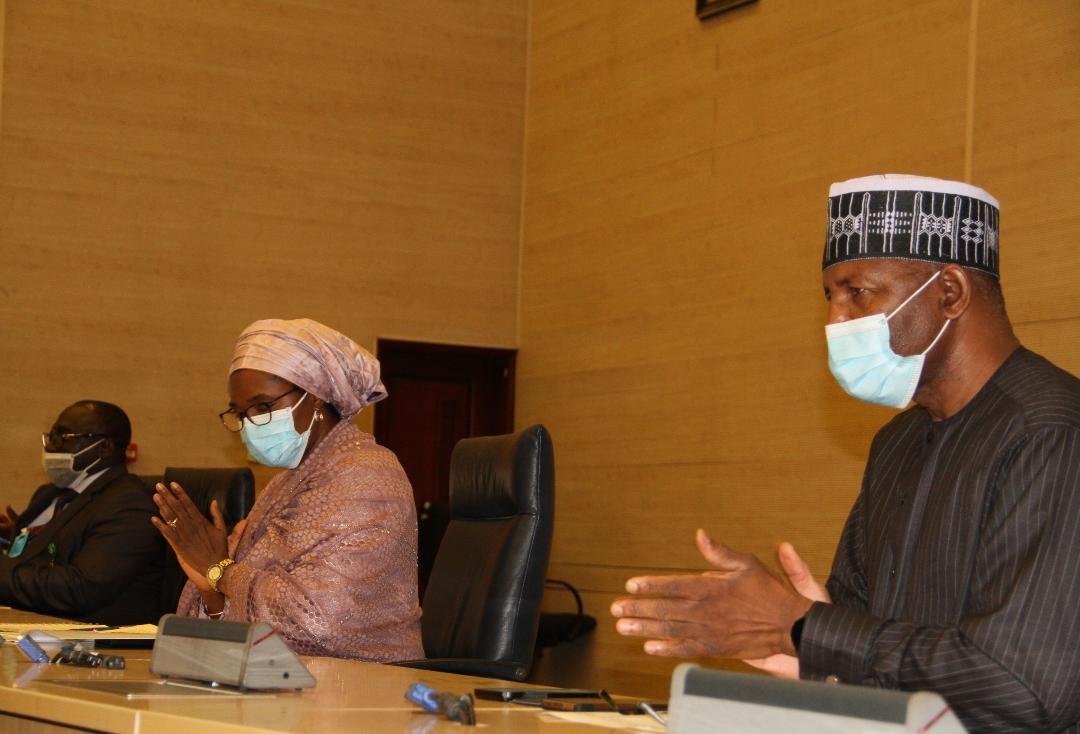 Mrs. Zainab Shamsuna Ahmed, Minister of Finance, Budget and National Planning, on Thursday in Abuja performed the swearing-in of Barrister Azi Amos Isaac and Barrister Nosa Smart Osemwengie, as chairman and member of the Investments and Securities Tribunal (IST) respectively.

The appointment of the duo, she noted, means that “the tribunal now has a full complement of 10 members in line with the enabling law, the Investments & Securities Act (ISA), 2007.”

While urging the members to diligently work together to discharge responsibilities of the tribunal, she expressed hope that they “will justify the confidence reposed in them by President Muhammadu Buhari.”

The Minister congratulated them for being found worthy of their appointments to the highly exalted positions, “at a time when all hands are needed to build our economy.

“As you all may be aware, the IST was first inaugurated in December, 2002. It is a specialised fast-track court, established for the settlement of disputes in the capital market.”

Since its establishment, the tribunal, Mrs. Ahmed noted, has made some strides, particularly in its adjudicatory role which has gone a long way to sanitize the capital market and build investors’ confidence.

Within its short time of its existence, in view of the dynamism in law, the tribunal has reviewed its Procedure Rules with the publication of the IST (Procedure) Rules 2014, besides partnering the Securities and Exchange Commission (SEC) to review the enabling law with the enactment of the ISA, 2007.

So far, the tribunal has to its credit the publication of its Law Reports, ‘The Nigerian Investments and Securities Law Report (NISLR),’ which the Minister noted, has, in no small measure, enhanced capital market jurisprudence.

Recalling the challenges that affected the tribunal in the past, she said: “Notwithstanding these commendable achievements, the tribunal has in the last five years suffered many setbacks due largely to poor administration. These setbacks have blurred, if not completely wiped out, whatever modest achievements the Tribunal might have recorded in its adjudicatory role.

“We may recall that in November, 2015, the Tribunal was dissolved and the Chairman and its members relieved of their jobs. A new panel of the tribunal, which includes many of the members here seated, was inaugurated in 2017.”

“Again, barely two years into your tenor, the chairman of the tribunal was removed. The problems with the tribunal had been infighting amongst members, lack of industrial harmony and a series of complaints bordering on mal-administration. These have been the bane of the tribunal and source of embarrassment, not only to the ministry but the federal government,” she recalled.

In view of these challenges, Mrs. Ahmed, reminded the members “that the chairman’s responsibility is to provide good leadership that would galvanise the human and material resources at the tribunal’s disposal on the path of stability towards achieving its mandate in a consistent manner. I call on all members of the IST to cooperate with the new chairman, so that the vision of the tribunal which is ‘to be a world class capital market tribunal that is fair and transparent, dispensing justice without fear or favour,’ could be attained.

On his part, the new Chairman, Amos Azi, described the appointment as a challenging one, expressing the readiness of the board to ensure that Nigerians are not disappointed.

The tribunal, he noted, “was established as a critical infrastructure in the ecosystem of the Nigerian capital market and indeed Nigeria as a whole. From 2003 to date, they have given judgement in the value of assets of over N844bn and from 2017 to date they have given decisions in monetary value of over N24bn.

“The tribunal has not failed in its statutory responsibility, it has carried out its assignment with candor and integrity and I will improve on that. The issue of administrative and labour related issues we are already working to address that. I am happy to report that we have so far made very meaningful progress,” he explained.

The ceremony was also witnessed by Lamido Yuguda, Director-General of the SEC.

Azi said the tribunal is equipped and properly situated to look into all financial issues in the country and expressed the hope that it can be transformed so that it can look at all issues arising from the entire financial sector.

Besides Azi, who is chairman and chief executive of the IST board, there are four full-time members including Osemwengie, Jude Udunni, Abubakar Ahmad, and Albert Otesile. The part-time members are Emeka Madubuike, Mallam Garba Kasimu Kurfi, Edward Ajayi, Onyemaechi Elujekor, and Mamman Zargana while Barrister Habu Yerima Saleh is the chief registrar.

Opening photo: The Minister of Finance, Budget and National Planning Mrs Zainab Ahmed (centre), making a point during the inauguration ceremony of the IST board members on Thursday. She is flanked by the Director General, Securities and Exchange Commission (SEC), Lamido Yuguda (right) and the IST Chairman, Amos Azi.