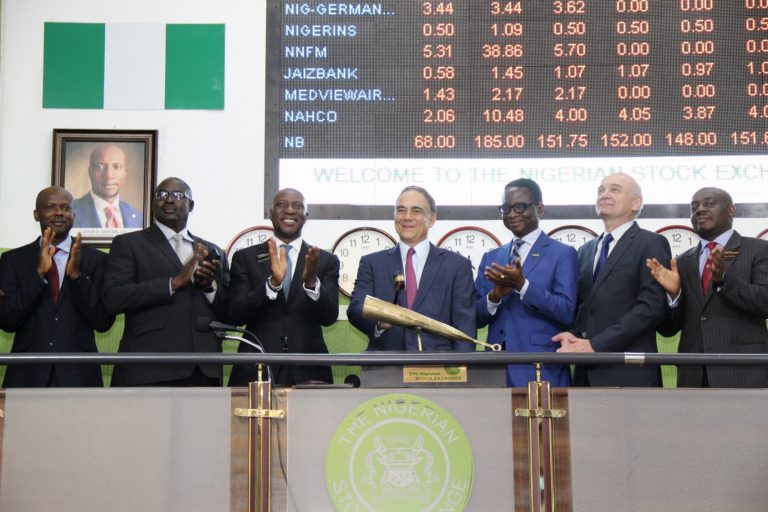 The management of Flour Mills of Nigeria Plc, on Thursday in Lagos assured the nation’s investment community that its ongoing N39.9bn rights issue by way of 1.476bn ordinary shares of 50 kobo each at N27 each, is part of efforts to reduce cost of servicing its commercial loans and retaining shareholder value.
Specifically, the rights issue, which opened on January 15 and would close on February 21, 2018, is on the basis nine new shares for every 16 currently held as of December 8, 2017 would be ploughed into repayment of overdraft facilities and short-term obligations. This, the company said, was financed at 45% last year from N165bn to N242bn, in addition to enhancing working capital
Addressing shareholders, stockbrokers and the financial press during the Facts-Behind-the-Issue organize to enhance understanding of the rights issue, the company’s chairman, John Coumantaros recalled that commercial bank loans were obtained in a bid to expand the company’s foothold on the agro-allied space over the past five year.
During the period, according to him, the company aggressively diversified its supply chain, securing its sources of raw-materials locally. In this way, he continued, the company would conserve scarce foreign exchange, adding that exiting the cement business in 2014 was enable it concentrate on its new mantra of “feeding the nation every day.”
“The last two years have been difficult because of (Nigeria’s) recession,” he explained adding that now that the country is back on its feet, the rights issue is to reduce the debt burden from the current N145bn to N100bn with equity.
Drastically reducing the debt and the cost of servicing same at this time, he continued, is necessary because “you cannot grow your business or investment at 20% interest rate (hence the rights).
“Now, there has been stability over the past six months, so this is the right time to do this,” he stressed, noting the strong response from its overseas shareholders, who he said “are very interested” in the offer.
With the rights proceeds, he stressed, “we would reduce our debt and manage our capital expenditure… We’ll remain disciplined and focused in our resolve to feed the nation every day.”
Fielding question, he said the debt would be further reduced, under the capital raising structure, through the issuance of bonds to replace higher yield commercial debts.
Also speaking, the managing director, Paul Gbededo said the company’s preferred capital structure is a debt/equity ratio of 1:1 over the next five years.
Welcoming the Flour Mills team to the exchange, NSE’s chief executive officer, Oscar Onyema expressed delight that the company chose to further educate the capital market community on the offer which is a demonstration of the confidence reposed on the Nigerian economy and the market.
He encouraged other listed companies to leverage on the opportunities offered by the NSE as a platform, just as he tasked the management and board to strive for sustainability by adhering to higher corporate governance principles.