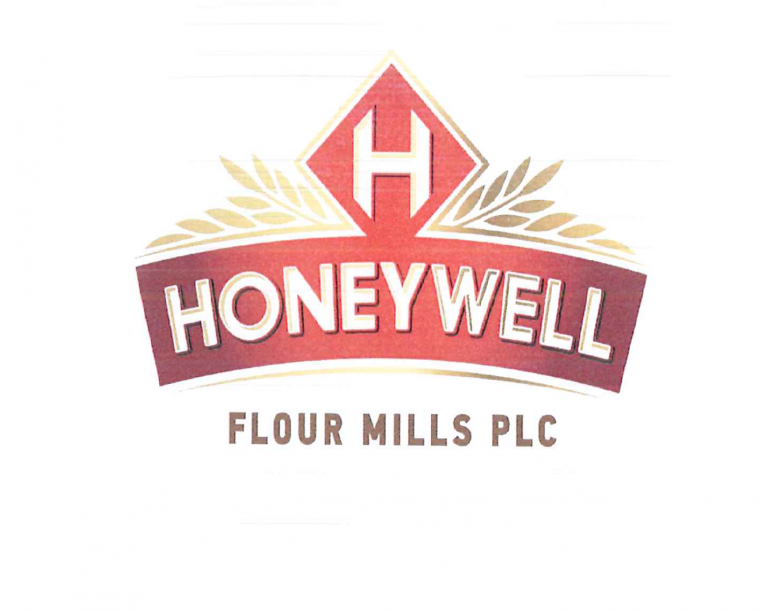 Honeywell Flour Plc recently presented its earnings report for the nine months ended December 31, 2017 through the Nigerian Stock Exchange (NSE) within the regulatory timeframe and even earlier than previous one, thereby helping investors and traders make projections and plan their investments.
The numbers beat expectations to reflect the relative improvement in earnings power and impact of the Central Bank of Nigeria (CBN) intervention in the forex market that has ensured stability in the Naira’s exchange rate, despite other challenges facing the nation’s manufacturing sector. Those challenges that continue to impact operating cost in the manufacturing sector include: the lack of basic infrastructure like road and power, besides the unfriendly cost of funds.
Turnover for period was up by 44% to N54.65bn, from N37.97bn in the corresponding period of 2016, while profit growth was more significant at 110%, from N1.32bn in 2016 to N2.78bn, just as balance sheet is robust enough to support future growth and better numbers. Total assets and shareholders’ Funds were up by 11% and 4% to N125.05bn and N54.64bn respectively, resulting in Earnings Per Share of 35 kobo from 17 kobo recorded in 2016, pointing to the possibility of higher dividend for 2018.
Based on the intrinsic value of Honeywell Flour Mills, its shares are fairly price at N8.00 each, going by the recent numbers emanating from the company and in the industry where it operates.
The growth in its numbers shows that the company has capacity to meet market demand and service the new captured markets as reflected on the top line, especially given the high cost of sales at 76.89%, made worse by the high cost of financing its operations, despite 20.44% decline to N3.58bn from N4.5bn.
This has eaten deep into the profit line as reflected in the company profit margin of 5.09% even if it went up from 3.48% in 2016, it is still below international standards of 15%, suggesting the need for the company’s management to significantly drive down cost to ensure more of its revenue is retained, because 5k income is very poor.
This notwithstanding, the strong earnings and improved net asset have given investors high margin of safety, considering its market value in a bullish market and recovering economy, where the stock is trading at more than 100% discount to its Book Value of N6.89 per share.
The relative improvement in the nation’s economic activities has impacted growth in the company’s revenue, just as consumption had moved up gradually with GDP looking up, amidst hope that such will be sustain in 2018.
A breakdown of the turnover for the period, showed that the food segment contributed over 80% of total revenue, which was a boost for the bottom line, regardless of the high tax for Q3. 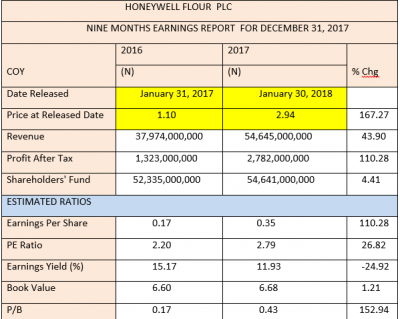 The rising earnings power of the company was sustained from first to third quarter, as shown in the Q1 Earnings Per Share of 8kobo to Q2 28 kobo, and then 35 kobo in Q3, as the economic recovery momentum continues to support improved production activities. Other incomes from sale of its by-products, exchange gain and sundry income also impacted bottom line, with the continued turnaround in the company’s operation. Shareholders should expect a better dividend payout at the end of this current financial year and beyond.
Valuation/Recommendations
Honeywell Flour Mills’ Price/Earnings Ratio stood at 2.79x, up from 2.20x in 2016, as a result of price rally, just as it still have a shorter and good waiting period for any investor on the strength of its improving earnings power that will keep investment horizon reasonable for any period as long as the company numbers continue to look up to support new price breakout. Price/Book Value for the same period stood at 0.43x, revealing underlying value and high margin of safety.
Investors with short, medium and long-term horizon should look the way of this stock. Traders can take advantage of the low price to position now. We have therefore revalued Honeywell Flour Mills and upgraded it to a BUY. 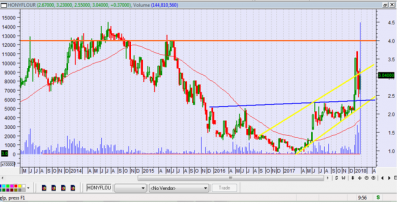 Price action of the stock revealed that it has been trending up since the release of its 2017 full financials, in line with its quarterly earnings performance improvement and general market uptrend despite various pullbacks owing to recurring profit taking. It however rebounded fully when it broke out a strong resistance level of N2.30 in January 2018 to go as high as N3.69 before pulling back again to N3.00. But as the stock is repeating the same pattern of 2014 and 2015 at this period of uptrend, the possibility of a next move to breakout the orange line of N4 resistance level is high, as the market is looking forward to the company’s 2018 full year financials.
The company’s price action forming a cup and handle chart pattern that reveals a continuation of trend, following which traders should watch for the first breakout at N3.15 and second resistance level at N4. Market and analysts look forward to the March year end account in May and June if all things remain equal, being a pre-election year. Five-Year Earnings Performance
The company’s mixed performance for the past five years has reflected in its sales revenue and profit level, which has resulted in unstable dividend payout during the period under review. Sales revenue for the period has been on the rise, helped by the company’s penetration into new markets.
Nevertheless, when all other ratios like the low Price to Earnings (P/E) ratio and high Book Value, compares to current market price. It will therefore be appropriated to place the equity at an intrinsic value of N8 to reflect the recent numbers posted for 2017 and so far in the ongoing financial year.
Over the past five years specifically, the company’s turnover grew by 16.45% to N53.23bn from N45.71bn in 2013 after touching a high of N55.08bn in 2014, while within the same period, profit after tax has oscillated to a negative position of N3.02bn in 2016 and low of N1.12bn 2015 from N2.84bn in 2013, representing 51.41% growth to N4.5bn.
The company’s profit level has been unstable in the five-year period and at the beginning of the financial year 2017, just as dividend payout has been irregular to indicate its earnings power that may result in investors retaining their shares. The company’s current shareholding structure and float are expected to support its share price. The recent changes in the food and beverage industry due to CBN’s intervention in the Fx market as many of companies in that sector depend heavily on imported raw materials despite the ongoing backward integrations, the company future looks promising if this tempo is sustained.

Profitability Ratios
Honeywell Flour Mill’s rebounding earning power and low P/E ratio of 3.24x as at full year 2017 against the 5.61x in 2013, has reduced investors’ waiting period to recoup their investment as at release date. Along with the high estimated Earnings Yield of 30.84% of the price.
Please note that the fluctuations recorded year-on-year in P/E ratio and Earnings Yield in the table below was due to the company’s unstable earnings and price movement. Estimated ratios show that the Book Value has not been stable in the last five years. Also, profit margin has been low significantly, due to the increasing cost of operations from a low of 2.28% in 2015 to 8.09% in 2017. Return on Equity for investors have been mixed also for five years as depicted in the table below.