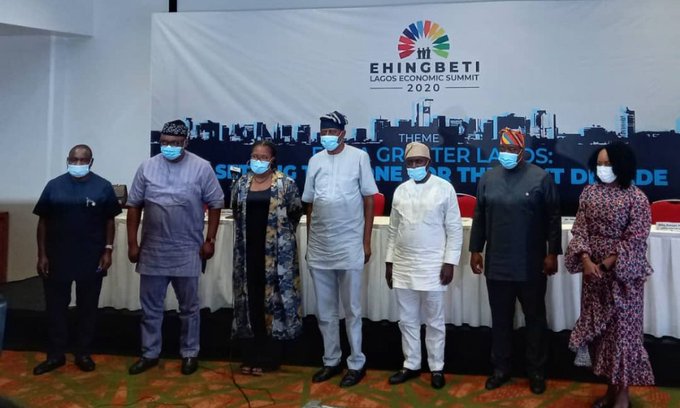 The Lagos State Government will host the eighth edition of its Ehingbeti Economic Summit 2020 from November 10 to 12, 2020, driven by the private sector, as part of pursuing an inclusive government mechanism for the state.

This year’s edition, with the theme: “For a greater Lagos: setting the tone for the next 10 years, according to Sam Egubi, the state’s Commission for Economic Planning and Budget, coming six years after the last one in 2014, is holding 20 years after the maiden summit in the year 2020.

Due to the Coronavirus pandemic, this year’s edition will hold virtually, thereby offering opportunity for a wider range of participants and facilitators from the private sector especially as they join from the comfort of their offices. It will also expected to be a great leap forward, allowing participation from across the globe in what is expected to be the biggest gathering this year.

Unveiling the summit to the media, Egubi, who was accompanied by some members of the State Executive Council and other stakeholders, explained that the summit brings together local and international private sector players on a mission to “create the Lagos of our dream.”

Beyond that, they will also have an opportunity to participate in making the dream a reality, adding that since inception Ehingbeti has fashioned 119 resolutions in its history, of which 109 or 91.6% have been implemented.

Lagos, the commissioner continued, is trying to stimulate contributions, allowing the private sector to lead the way, assuring that the red and blue rail-line which is on its way to being delivered is the outcome of a resolution at a previous edition of the summit.

He expressed pride in the fact that the private sector in Lagos which is alive and active, will drive the summit, with the state government’s backing.

Setting the tone for the parley, Olayemi Cardoso, a former commissioner for Commissioner, Economic Planning & Budget and co-chairman of the Ehingbeti Summit commended the administration of Governor Babajide Sanwoolu for bringing back after 14 years.

The number of resolutions implemented from the previous editions, he continued, “is a great example of how continuity and planning can bring about results… It is something every successive governors and all Lagosians should be proud of.”

This year’s edition, according to Cardoso, chairman of Citigroup, is happening at a time the Coronavirus pandemic has wrecked so much havoc in the global economic space, with various governments paying heavily for the resultant lockdown imposed to stem the spread of the outbreak.

In the case of Nigeria, he recalled the World Bank’s forecast that about five million Nigeria could be thrown into poverty in the aftermath of the pandemic, which is why, he continued, the Ehingbeti summit “is an opportunity to show what Lagos is truly made of and can do.

“This year (edition) is about celebrating the past 20 years and then put our heads together to define the future (of Lagos)… What are the things we need to do? How we as private sector (players) can talk about our issues and get the Lagos State government to do the needful,” he stressed.

Also speaking on the summit, Mrs. Solape Hammond, Special Adviser to the Governor on SDGs and Investment, listed expectations from the summit to include the creation of an enabling environment to discuss the way forward for Lagos  in terms of growth and development, hearing from experts, citizens and development partners in various economic spheres.

It is an opportunity, she continued, to showcase Lagos to the world, leveraging on the challenges posed by the Covid-19 pandemic. The fact that more people will participate in this year’s summit, Hammond added, will also be used to fix the image of Lagos and by extension Nigeria and enhance the investment outlook.

The virtual summit will also offer an opportunity to hear from the people of Lagos, especially from young people about their issues, opportunities and potentials, among others.

Commenting, Muda Yussuf, director-general of the Manufacturers Association of Nigeria (MAN) expressed the commitment of the private sector to support the summit, given that building a progressive economy is about inclusiveness.