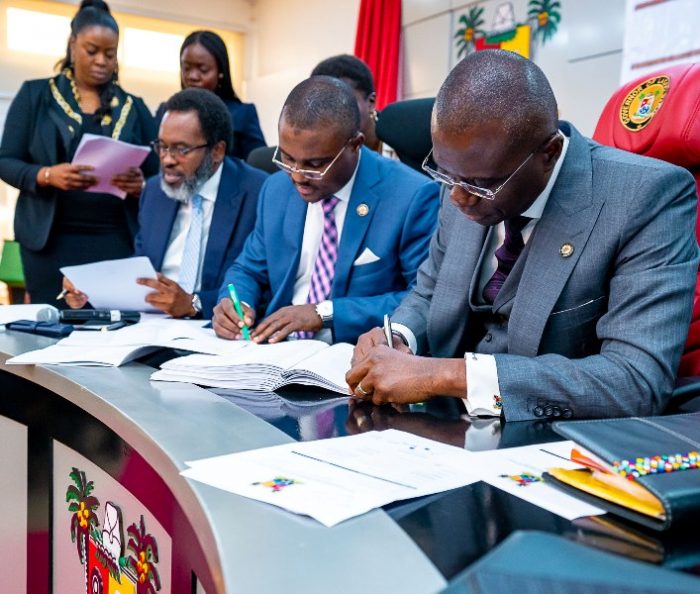 The Lagos State Government, on Wednesday, January 29, 2020, signed a N100bn Series III bond, according to Governor Babatunde Sanwoolu, will enable the administration to embark on infrastructural projects.
The bond, which is part of the government’s N500bn issuance programme was oversubscribed by 196.5%, a situation the government believes is “a testimony to investors’ confidence in Lagos State and her strong credit profile.”
The bond proceeds would be used to finance infrastructural projects needed to boost the State’s economy, even as the governor assured via his personal twitter handle, that “administration remains unwavering and ready to make Lagos a functional state for business and for our people.
“We made a commitment to all Lagosians that we will implement an agenda to achieve a greater Lagos we all will be proud of. We intend to keep our promise,” he further assured.
The Series III 10-year Fixed Rate Bond Issuance, which opened on Tuesday, December 31, 2019, and closed January 13, 2020, within which a total of 315 bids valued at N196.48bn were submitted. Of these, a total of 208 bids valued at N100.33bn, qualified under the terms of the offer at the clearing price of 12.25% per annum.
Proceeds will be used to finance physical and social infrastructure projects across the state. It has an Irrevocable Standing Payment Order, as well as a Consolidated Debt Service Account funded from the state’s Internally Generated Revenue.
At a signing ceremony held at the State House in Alausa, Sanwo-Olu said described the bond issuance as “a new journey that is not meant to serve our personal interest but to activate more prosperity for our dear Lagos and give our people the hope for better tomorrow we all dreamed. When we came into Government, we made a commitment to all Lagosians that we are coming to pursue and implement an agenda that will build our capacity to achieve ‘Greater Lagos’ we all will be proud of.
“Today, I am standing in from you all to say we are writing the financial history of Lagos in another chapter and it will bring good dividends to all residents. With this N100 billion bond, we will ensure that all Lagosians feel the direct impact of this intervention in their homes and on the roads. We are bringing new infrastructure and repairing the existing ones, including bridges and hospitals. We are going to renovate schools and build new ones for our children; slums will be regenerated and pressing environmental issues will be solved. We are going to make people feel the essence of governance.”
For the state’s Finance Commissioner, Dr Rabiu Olowo, the bond programme is in response to the need to help Lagos close its “huge infrastructural gap” in the face of limited financial resources available to the State. He said the State Government took the advantage of favourable investment climate in the capital market to issue the “Series Three” of its bond programme to raise the money.
The cost of not issuing the bond, he said “would have been huge and it would mean over 20 million Lagosians would be underserved in many areas. It was, therefore, with this mandate that the Lagos State Government sought the support of professional advisers to access the capital market in December 2019.
“It is fulfilling to note that, despite hurdles we faced, we have been able to achieve the target we set for ourselves. In fact, we exceeded the target. I want to assure all residents that the proceeds from this bond issuance programme will be judiciously utilised in line with our T.H.E.M.E.S agenda to achieve a ‘Greater Lagos.”