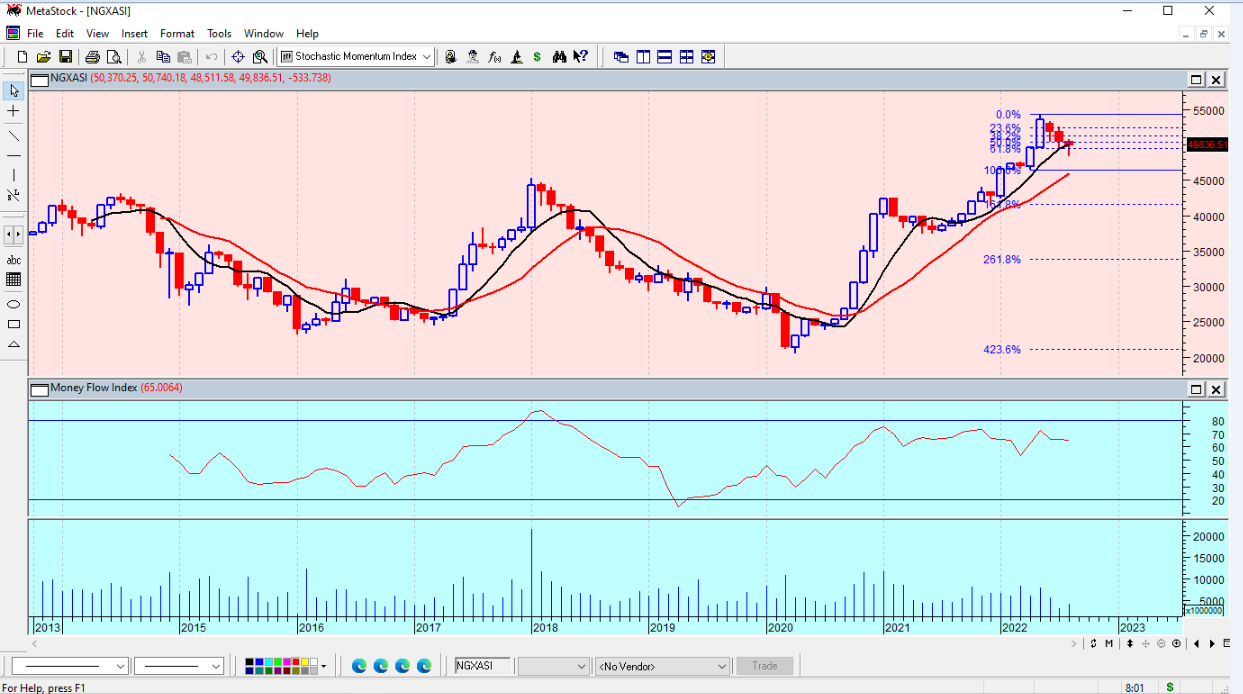 The Nigerian stock market in August extended its pullbacks and bearish trend for the third successive month, halting the two-year historical pattern of closing positive back to back in 2020 and 2021. This was despite the recovery seen in the last trading session of the month on position taking among blue chips in expectation of more interim dividend paying banks results and economic data.

The period under review resisted decline after making lower lows and lower highs in the midst of increased volatility and mixed sentiments, driving by low liquidity in the face of better-than-expected half-year corporate earnings and mixed macroeconomic data as players positioned for interim dividend from the big banks. Three banks recently notified the exchange and investing public of delays in the submission from their primary regulator- the Central Bank of Nigeria (CBN) in approving the financials. The wait will now be extended to September.

Meanwhile, the new month of September, being the concluding part of third quarter, will not only witness mixed trend as a result of new positioning towards the Q3 numbers expectedly, but also experience reactions to earnings from few listed equities yet to release their half-year numbers, especially the dividend paying banks. Also the corporate actions in the new month will influence the expected mixed outlook for the period.

Note that economic recovery despite the weak or threat by the cases of insecurity in the nation, inconsistent policies and global geopolitical tension in midst of rising inflation and rate hikes that are driving the fear of economic recession across the globe, thereby dampening demand for oil. The happenings in the economy and political space are likely to impact the market and different sectors positively or negatively.  Just as the recently released Q2 GDP figure of 3.54% should guide investment decision ahead of the year end.  This will further support the stock market as companies in non-oil sectors and others have performed well as reflected in the stronger corporate numbers.

Also, the nation’s rising inflation attained its peak of 19.64% since 2015 and the improvement in Nigeria’s Purchasing Managers’ Index (PMI) of 53.8 points, from the June position of 50.9points, and with back to back interest rate hike by CBN as voted by the MPC members, investors’ selloffs and buying interest had remained mixed. This can be linked to sovereign risk and illiquidity in the system, as Nigerian stocks are grossly undervalued this time, even as the quite mode and high yield in fixed income market continue to affect the market, due to the exchange market problems in the country.

We believe that effective coordination among the policy makers will reduce policy mismatch, summersaults and promote realistic economic reforms, structural adjustments, effective disbursement of capital project funds and real change in the implementation style of the government necessary to further support the seeming economic recovery by enhancing productivity and national output needed to support growth.

The bear-run during the month of August was obvious in the 22 trading sessions of the month, as the market closed negatively in 15 days, recording growth in just seven sessions to extend the previous month’s negative outlook. It also reduced the year-to-date gain, as NGX’s All-Share Index was down by 1.06%, owing to price correction, low traded volume and investors fear. Despite the impressive earnings, as many stocks remain attractive, offering high margins of safety and upside potentials.

Meanwhile, during the month under review, the key performance All-Share index shed 533.74 basis points, closing at 49,836.51 basis points, after touching a low of 48,511.58bps and highs of 50.740.18bps, from the 50,370.25bps it opened for the month, representing a 1.06% decline. This came with selloffs in high, medium and low priced stocks, that supported the oscillation witnessed during the month.

The buying volume of total transactions for the month was 59%, while selling position was 41%, while volume index for the period was 0.63. Market capitalisation for the month lost N280billion, closing at N26.88 trillion, from an opening value of N27.16 trillion, representing a 1.03% value loss.

The market sustained mixed sentiments and trends for stocks, especially with the stronger earnings, oscillating oil prices, expectation of interim dividend and investors going with value and defensive stocks that have strong yields to hedge against high inflation in the midst of a stronger US$ and depreciation of the Naira against other currencies.

Traded volume for the month rose by 28.44% to 4.2bn shares, from 3.27bn units in the month July, even as market breadth for the period was positive with gainers outnumbering losers in the ratio of 47:36. This reflected on sectorial indices that closed mixed in the period under review.

Sectoral performance indexes for the period were mixed, as shown in the chart below; the NGX Industrial goods led the decliners, after losing 13.83%. This was followed by the Oil/Gas, Premium index, NGX 30 and Pension index with 4.34%, 2.45%, 2.38% and 0.89% respectively, as investors took more position in Insurance, Consumer goods, Banking and the Mainboard, as they closed 7.90%, 4.76%, 2.43% and 0.68% higher respectively during the month, with. 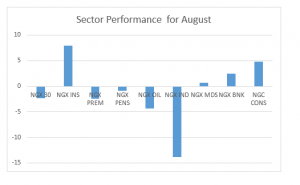 The worst performing stocks on the other hand, were BUA Cement, which share price witnessed selloffs and profit taking in the midst of its impressive Q2 numbers. Next was University Press  that had suffered free fall on the exchange due to weak Q1 numbers and selloffs, others that topped the losers chart are McNICHOLS, Industrial &  Medical Gas , Cadbury, Unilever, Okomu Oil, NPF Microfinance, Flourmill and RT Briscoe.

Speculative traders and bargain hunting have help the market to resisted decline after trending at its lower lows and lower highs as revealed by daily, weekly and monthly time frame, with money flow index sideways movement but players trade with caution to avoid a bear trap.  As the NGX composite index has formed symmetrical chart pattern on monthly chart. On week time frame, clearly signaled recovery and retracement in the new month.

The symmetrical triangle chart pattern on the multiple time frame of weekly and monthly supports continuation of current trend or reversal depending on market forces and news, now that more interim dividend results are expected and others economic data.  As oil price continued to oscillates around $92 to $96 in the international market, also the government planning to borrow more on a lower rate due to high cost servicing debt.

Investors and traders should stay very cautious with their investments throughout the end of 2022 and beyond, by having good entry and exit strategies at all time.

We expect the current trend to continue until other interim dividend paying banks like GTCO, UBA and Accesscorp release their numbers, as Zenith Bank, Stanbic IBTC and Fidelity Bank are impressive performance with 30 kobo. N1.50 and 10 kobo interim dividend respectively, has given market players insight what they should expect at the end of the year.

The mixed intraday movement is likely to persist as the month of September progresses in the midst of profit booking and investors repositioning their portfolios ahead of Q3 numbers. This is also against the backdrop of the fact that the capital wave in the financial market may resurfaced in the midst of high-interest rate and yields in the fixed income market, high inflation and weak economic recovery and outlook for 2022 as government and its economic managers are going front and back with mismatch polices and action here and there. Coupled rising insecurity and high cost of doing business in the country.

Also, investors and traders are positioning amidst the changing sentiments in the hope of improved liquidity as a result of political activities and positive economic indices to continue and support the reversal of the current correction.

We see investors focusing on portfolio adjustment and rebalancing by targeting companies with strong potentials to grow their dividend on the strength of their earnings capacity.

However, recovery may continue, depending on market forces, going forward, as propelled by expected Q3 earnings reports, until the next MPC meeting next.

Are you interested in building wealth and improving your trading results through tested and effective investing strategies for the rest of the year and beyond? Smart domestic investors understand the power of money flow and timing in wealth creation through stock trading and investing.

This Q4 masterclass is for you, because it will help you follow exact steps in real time, using the new strategies by following the current volatility and happenings in the market.

Nigeria has entered one of the greatest inflationary periods in the last six months, which is threatening investment and economic activities. And government policies through their economic managers had pushed millions of Nigerians down …. Out of the middle class…out of private retirement, healthcare and decent lives, based on independence and privacy… into a collective nightmare we call financial lockdown.

This is what happens when people are trapped by their own collapsing currency, such that they become deeply indebted. Inflation causes huge distortions in the economy and in the markets, so its critical that you take the necessary steps to ensure you are not left behind.

We have put together this Q4 masterclass to help market players avoid those needless losses and build a profitable portfolio that has high ROI…… Especially in a volatile market, when you don’t know which way up….

However, with less than 30 days to Q4 Master class October 1, 2022, you need to make money and avoid losses, boost your trading bottom line. Don’t miss this opportunity.

During this practical session our top industry experts will reveal profitable trade ideas and opportunities in Q4  to consolidate your gains and ride on year end seasonality to maximise returns. That is what you can implement immediately to start tracking the result by yourself and the investdata Research team on your behalf. You definitely want to be among the smart traders and investors in Q4. So, send “YES” or “STOCKS” to 08028164085 and 08179547605.